A refugee policy built on deflecting the issue, rather than confronting it, is not sustainable. We cannot continue to 'contract out' our international obligations. 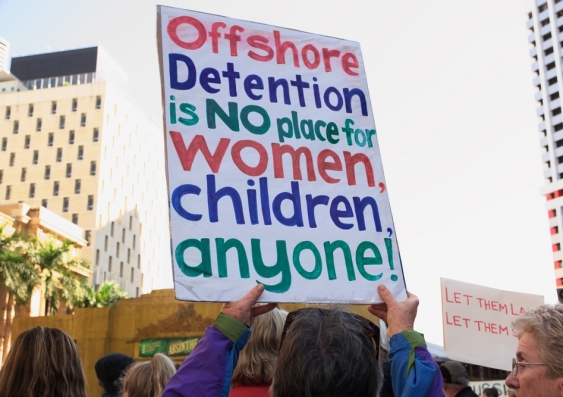 PNG not only wants to end the Paladin security contract on Manus Island, it’s demanding Australia find a permanent solution to the refugee crisis. Image from Shutterstock

Nearly six years into the revival of its offshore detention policy, Australia’s government is facing a story of corporate and administrative intrigue that highlights the utter unsustainability of our current approach to people seeking our protection.

The details of Australia’s contract with a little-known security provider called Paladin, as first reported in the Australian Financial Review, were colourful: Paladin was registered to a beach shack on Kangaroo Island and had a post box in Singapore.

According to media reports, there were mysterious characters, including a company director denied a PNG visa and sanctioned by Australia’s home affairs department. The Australian government also ran a “limited tender” process, inviting only one party, Paladin, to bid.

The dollar figures were extraordinary: the contract to provide housing and security for refugees on Papua New Guinea’s Manus Island was for A$423 million over 22 months, or A$20.9 million a month. That’s about A$1,600 per day per person – not including food or welfare services.

A suite at a five-star hotel in Sydney costs less than this. Of course, the conditions for a refugee on Manus Island are nothing like those in a luxury downtown hotel. A retired logistics manager estimated that the real cost of accommodation is A$108 per person per night, which explains why Paladin is estimated to be pocketing a profit of A$17 million a month.

Keeping refugees on Nauru and Manus Island costs Australian taxpayers 56 times more than it would to have them live among us.

We haven’t seen any service provided by Paladin on Manus, only 500 locals employed to walk around here and watch what we do everyday. They’re paid $5000 per year. The question is what happens to the remaining $419 million Paladin’s been receiving from the Australian gov.#auspol

Now, with the Paladin contract due to expire in less than two weeks, the re-elected Coalition government is being questioned about its plans, and PNG is pushing back.

It is messy. On Sunday, Home Affairs Minister Peter Dutton said “the likely arrangement is that there will be a continuation” of Paladin’s contract, while on Monday PNG’s immigration minister, Petrus Thomas, said his government expects to cancel the contract and have a transparent bidding process that favours local companies.

As Australian Foreign Minister Marise Payne visits PNG this week, the issue will undoubtedly be high on the agenda.

The PNG government’s motivations in seeking the termination of Paladin’s contract are mixed – they are not purely altruistic. On opening the bidding process to local firms, the immigration minister said:

Papua New Guinean companies now have the capacity and expertise to do the job and should be given the opportunity to participate.

PNG is also increasingly putting pressure on Australia to find a permanent, durable solution for the refugees on Manus. The governor of Manus Province, Charlie Benjamin, is alarmed by the high rate of self-harm and suicide attempts among the refugees, as well as the potential damage to Manus’ reputation as a safe and welcoming place, and attendant social problems. He is demanding Australia take action:

They don’t want to be here and Australia, you have to take responsibility. You have to move them.

The Paladin contract has been heavily scrutinised during Senate Estimates and is being investigated by the Commonwealth auditor-general and internal auditors in the Department of Home Affairs.

While the secrecy, lack of transparency and ducking of responsibility are gobsmacking, this has become part and parcel of Australia’s largely bipartisan approach to refugee policy in recent years.

Indeed, the so-called “Paladin Affair” raises the broader problem of Australia’s overall approach to asylum. It highlights the challenge of Australia trying to impose its refugee policy on another country and seeking to “contract out” its international legal obligations – something it cannot do, as a matter of law.

It also shows why an approach built on deflecting the issue, rather than confronting it, is not a sustainable way to address the needs of the world’s displaced people.

A successful refugee policy not only manages national borders, it also protects people who need safety. This is why we must begin to develop an approach that is both pragmatic and principled, realistic and achievable.

The Kaldor Centre Principles on Australian Refugee Policy, launched last week by UNSW Chancellor David Gonski, provides concrete examples of how Australia can create a manageable refugee system – one that simultaneously benefits refugees and the Australian community. These principles are grounded in evidence-based research and are informed by good practice – both from overseas, and from Australia’s past experiences.

Australia’s offshore processing regime is not only causing trauma comparable to that seen in war zones or refugee camps around the world, it also costs billions of dollars that could be redirected towards more effective and humane alternatives.

Other countries manage to process, accommodate and protect refugees without resorting to a policy like this, so we should be able to do the same.

Australia’s current policies are causing harm to men, women and children who have committed no crime but to seek the protection of one of the world’s most stable, peaceful democracies. Now, more than ever, it is essential to shape a long-term vision for Australian refugee policy.