The Chief Justice of the High Court examined the evolution of key decisions while delivering a keystone address of the UNSW Law & Justice fraternity. 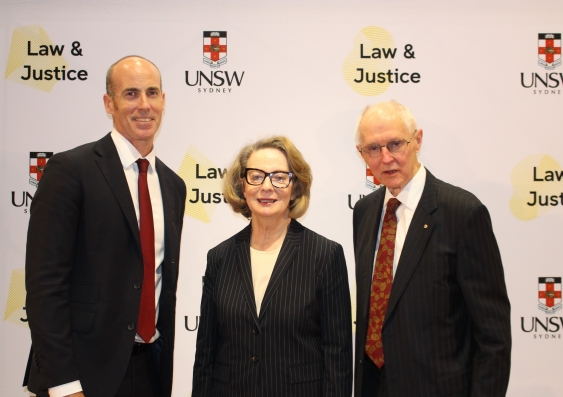 In the poignant lecture to a capacity audience, Chief Justice Kiefel traced the development of legal principles arising from key cases and highlighted how these cases were the culmination of past judicial “nudges” in the right direction.

“It was a great honour to welcome Chief Justice Susan Kiefel to deliver the 2022 Hal Wootten Lecture – our annual event honouring the vision and example of UNSW Law & Justice’s founding dean,” said Andrew Lynch, Dean of the Faculty of Law & Justice.

“This year’s lecture returned to an in-person event, and it was wonderful to fill the Law Theatre with a highly engaged audience, including students, staff, alumni and members of the community. Chief Justice Kiefel spoke about the ‘little nudges’ that precede landmark cases in the direction of the common law – referencing cases well known to law students from their very earliest courses.”

Setting the course for the law

In 2008, Hal Wootten spoke of his belief that “every now and then there is the opportunity to give a little nudge that sends the law along the direction it ought to go”.

Donoghue v Stevenson was “a landmark decision in tort law that stated the principle of when and to whom a duty of care is owed and provided the foundation for the modern law of negligence”.

Chief Justice Kiefel also highlighted the judgements of the High Court of Australia in Mabo v Queensland, which introduced the principle of native title into the Australian legal system.

Susan Kiefel has served as a Justice of the High Court in Australia since 2007 and was appointed Chief Justice in 2017.

In her address, the Chief Justice emphasised that Hal Wootten made an important contribution to the recognition of native title principle, and to the rights of Indigenous people in Australia. Wootten helped form the Aboriginal Legal Service, jointly presided over the Royal Commission into Aboriginal Deaths in Custody, and sat on the Native Titles Tribunal and the Australian Law Reform Commission. He has an enduring legacy in UNSW’s Faculty of Law & Justice, of which he was Foundation Chair and Dean.

The Hal Wootten Lecture was established in 2006 and is a highlight of the faculty's year.

Read about the Hal Wootten 50th Anniversary Scholarship which will support students experiencing adversity or disadvantage to undertake a degree at UNSW Law & Justice.