Opinion As Treasurer, Hockey proved to be an ordinary Joe

Joe Hockey’s experience as treasurer illustrates a few fundamental points about how not to do the nation’s top economic job, write Tim Harcourt and Richard Holden. 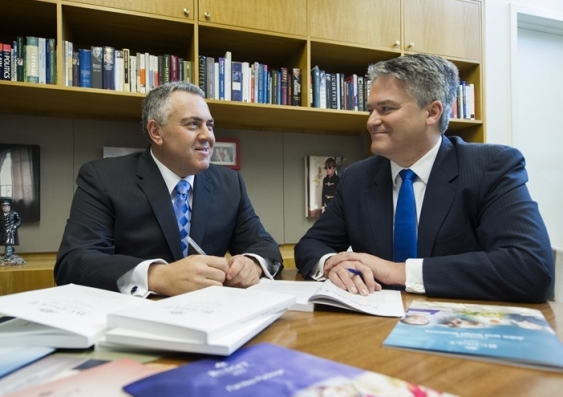 OPINION: Earlier this year, during the Prince Phillip knighthood debacle (dubbed #knightmare by Twitter) we speculated how Tony Abbott could make Malcolm Turnbull his treasurer, in place of the hapless Joe Hockey, and thereby save his prime ministership. Furthermore, we said if he didn’t, Malcolm Turnbull may go one better and take the top prize instead.

Of course, in the end Abbott didn’t make a move to replace Hockey until it was too late, and as a result Turnbull is PM, Scott Morrison is treasurer, Abbott is on the backbench and Hockey is about to leave parliament, having announced his resignation following September’s leadership spill. He gives his last speech today.

We cannot take too much pride in our earlier piece on the Liberal leadership spill and Treasury speculation. It didn’t take Nostradamus to suggest that team Abbott-Hockey was in deep trouble, and that something had to give.

Now with speculation that Hockey will be appointed as Australia’s ambassador to Washington, it’s a good time to assess what went wrong for him as treasurer. For Tony Abbott there’s talk he’ll be appointed to the UK or the Vatican, which would not be unprecedented in Australian politics as former prime ministers George Reid, Andrew Fisher, Joseph Cook and Stanley Melbourne Bruce were High Commissioners in London, and a former Deputy Prime Minister Tim Fischer ended up at the Vatican.

And with Malcolm Turnbull riding high in the polls in middle Australia (some say he is the best Labor prime minister since the Hawke-Keating era) it’s unlikely that Abbott will make a political comeback.

Hockey’s experience as treasurer illustrates a few fundamental points about how to do the nation’s top economic job. It’s one thing to be a capable financial services or tourism minister; but treasurer is quite a step up. Being an affable retail politician is not enough. It takes a combination of political and economic nous.

In some ways we were spoiled in Australia to have had such a strong performer as Paul Keating as treasurer for so long in the economic reform period. Keating had it all as a great economic reformer, master story teller and advocate, great political salesman and someone who drew the community into Australia’s great economic debate. People became interested in economics as Keating dominated the airwaves on the legendary John Laws program (where he made his famous “Banana Republic” comment) as much as he did in Parliament. Keating was one out of the box and we’ll never see the likes of him again.

And even after Keating, we had Peter Costello for 11 years - a powerful parliamentary performer with a barrister’s skill in mastering a brief and excellent economic instincts. But it could be argued that after the reforms of the Hawke-Keating government that helped open Australia up to Asia - and the massive resources boom fuelled by demand from China that followed - a drover’s dog could have run the Australian economy successfully in that period.

And we’ve also had Ralph Willis, who was sound technically but not a high profile salesman, the pedestrian and inept Wayne Swan, and then Joe Hockey who was pretty much gone after the disastrous 2014 budget. Hockey allowed himself to browbeaten by Peta Credlin to the extent that the highly respected Treasury Secretary, Dr Martin Parkinson, with whom Hockey worked well with and respected, was moved on by an Abbott-Credlin decision.

Hockey lost control of the 2014 budget process, got blamed for its catastrophic PR campaign in the community and then he added further insult to injury with his gaffes about “poor people not driving cars” and his “lifters and leaners” rhetoric. It was the opposite of “close, but no cigar” in every respect.

Hockey, like Abbott, thought repeating a few slogans was enough, when economic salesmanship requires a thorough understanding of the Australian economy, an ability to craft an economic narrative and vision for the country, and an ability to persuade the community of the wisdom of your vision. (Don’t forget, John Maynard Keynes was a great persuader when explaining his economic ideas and was as comfortable writing a column for the Evening standard in London as he was at a seminar in Kings College Cambridge).

Joseph Benedict Hockey was named after Joseph Benedict Chifley, a great Labor war time Treasurer and Post War Prime Minister of the 1940s. In fact, Hockey in his early days could have ended up Labor instead of Liberal. It’s said that Hockey, Abbott and Brendan Nelson could have easily ended up Labor MPs but instead of fighting a tough preselection in the west or the inner city, they ended up taking the easy option of a nice safe Liberal seat on Sydney’s north shore.

But Joseph Benedict Hockey was no Joseph Benedict Chifley as Australia’s Treasurer. As Australia’s principal economic leader, Hockey proved to be an ordinary Joe who just wasn’t quite up to the job. Let’s hope for the sake of his own reputation, and the country’s, that he makes a reasonable fist of the Ambassador’s gig in Washington. As Hockey himself said when suing Fairfax media, the only thing you are left with on politics is your reputation, and a sound performance as Ambassador to the United States may salvage what was lost in a turbulent and frustrating two years in charge of the nation’s finances.

Tim Harcourt is the J.W. Nevile Fellow in Economics at the UNSW Business School.

Vital Signs: Economically, Australia is at risk of becoming Germany, and not in a good way

The RBA should cut rates, but not because the banks are upping them