In a non-policing context, having to perform such acts would be a serious assault. This is why strip searches are meant to be a last resort and only used in serious and urgent circumstances. 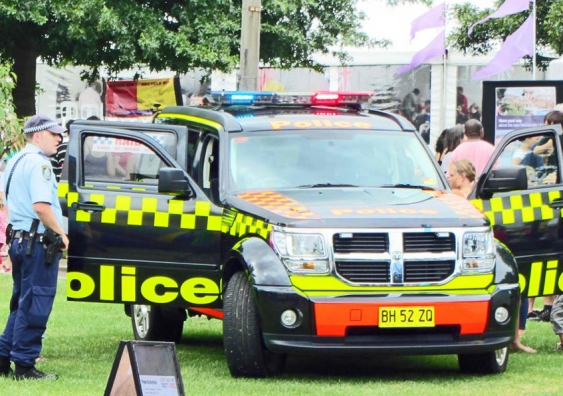 According to NSW Police data, 91% of strip searches conducted in the 2018-2019 financial year were for suspected drug possession. Image by Newtown graffiti via Wikimedia, Creative Commons 2.0.

Being strip searched by the police can be intrusive, humiliating and harmful. Typically, strip searches involve being required to strip naked in front of police officers, who often give the direction to “squat and cough”, bend over or otherwise contort the body.

Strip searches are meant to only be used by officers if they suspect, on reasonable grounds, that it’s necessary “for the purpose of the search” and there are “serious and urgent” circumstances that make it necessary. But the law provides no other criteria to guide police.

In a non-policing context, having to perform such non-consensual acts would constitute a serious assault. This is why strip searches are meant to be a last resort and only used in serious and urgent circumstances.

But strip searches are on the rise in New South Wales. Earlier this year, questions on notice to NSW parliament revealed strip searches in the field (this excludes strip searches in police stations) increased by almost 47% over four years. And on average, they found nothing 64% of the time.

Our research on the law also looked at strip search data obtained from a freedom of information request and from the Redfern Legal Centre.

Strip searching raises serious police accountability concerns. And reported experiences of being strip searched raise urgent questions about the legality, fairness and harmful effects of the practice in NSW. There are recent examples of people being forced to strip in public view, of police not following their own internal guidelines, and of strip searches triggering the trauma of sexual assault.

Our findings indicate there are systemic issues about how the law is applied, not simply the misunderstandings of a handful of officers. The key issue is with how police understand the requirement that a strip search only be used in serious and urgent circumstances.

Eighty-two per cent of charges related to drug possession, while only 16.5% were for drug supply, and 1.5% for dangerous weapons.

While we did not have access to the narrative accounts that police are meant to provide in the NSW Police database (COPS), these figures alone suggest routine unlawful practices. On its own, possessing a drug doesn’t give rise to the serious and urgent circumstances required in law to justify a strip search.

But there are also long standing concerns about the overuse of personal searches, including strip searches, against Aboriginal and Torres Strait Islander peoples.

What’s happening in other states?

There is no single model of best practice in Australia. The law in some states is just as permissive of police, if not more so, than in New South Wales.

The Northern Territory and Western Australia have few limits on police search powers. But there are helpful elements of the regulatory frameworks in South Australia, Victoria, the ACT, Tasmania and Queensland.

These include restrictions to strip searches in the field by offence type or post-arrest, repeated advice that only general searches should be used, and mandatory safeguards for privacy, without exceptions.

But in NSW, agencies have already begun to investigate the unlawful use of strip searching. The Law Enforcement Conduct Commission is investigating strip search practices by NSW Police.

The Coronial Inquest into the deaths of six young people at music festivals in NSW is questioning police use of strip searches.

And in June 2019, an internal NSW Police analysis reportedly disclosed concerns that strip searches were being conducted unlawfully, and about the lack of clarity around key laws.

The law needs to clarify what the “seriousness and urgency of the circumstances” that makes a strip search necessary, means. We argue strip searches should only be considered if police have a reasonable suspicion of a dangerous weapons offence, or drug supply offence and there is an imminent risk to personal safety. Drug possession should not be used as a reasonable suspicion for drug supply.

The definition of a strip search should also be made more explicit and include the range of practices currently used by police to aid visual inspections of the body, such as lifting up a person’s shirt, pulling clothing away from the body or the partial removal of clothing. (Contrary to the police commissioner’s belief, a strip search is not taking off your socks and shoes).

The humiliating practice of police directing people to strip naked on their lower half and “squat and cough” must stop. It is an unlawful cavity search that only a court should be able to order as a “forensic procedure”.

Across Australia, there is little accountability or transparency around police search practices. This is in stark contrast to the UK, where the police are required by law to provide quarterly public statistics.

NSW Police and other state police can provide routine data on how they exercise their powers, and it is in the public interest that they do so.