UNSW academics argue that the review into sex work could result in positive changes to the working conditions for many sex workers. 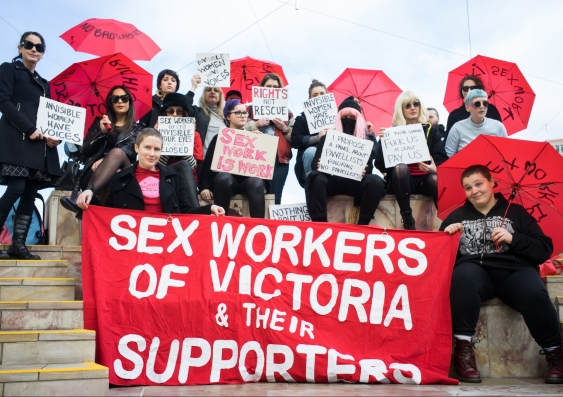 A protest at the Melbourne Writers Festival in 2016. Photo: Vixen Collective image archive

As the Victorian Government conducts its review into the regulation of sex work, the push for decriminalisation is accelerating across the country. With the recent vote to decriminalise sex work in the Northern Territory and with it being twenty-five years since NSW partially decriminalised, Victoria is now in a unique position to improve the health, rights and safety of sex workers in the state. Headed by Member for Northern Metropolitan Region Fiona Patten, the six-month inquiry is the first large-scale review of sex work legislation in Victoria since 1985.

For decades, Victorian sex workers have mobilised and advocated for decriminalisation, pointing out that criminal and licensing laws fuel stigma and discrimination and are seriously at odds with human rights and public health principles. By contrast, when sex work is decriminalised, sex work can be regulated via employment and industrial laws, planning bodies and workplace health and safety regulations that acknowledge sex work as work.

Opposition to decriminalisation is often based on moral objection to the commercialisation of sex and a conflation with violence and exploitation against women. Opposition is misguided because decriminalisation concerns adult consensual sex work. Coercion, exploitation, violence and sexual assault remain criminal acts and labour violations. If sex workers experience a crime in their workplace, they can more readily access legal redress in a decriminalised model.

Victoria now has an unprecedented opportunity to improve upon models in other jurisdictions that have not gone far enough to decriminalise or have left glaring omissions. NSW, for example, retained a number of summary offences on the books. While Aotearoa introduced greater rights and protections for New Zealand nationals in 2007, sex work is still criminalised for anyone without citizenship or permanent residence.

Sex workers have argued that abolitionism is, in itself, a form of patriarchal control. The failure to acknowledge sex workers’ agency is out of step with the current proposals (most recently by the NSW Law Reform Commission) to reform sexual consent laws by recognising that sex workers can place boundaries on their consent and can experience sexual assault at work.

The failure of licensing in Victoria

Victoria’s current system focuses on controlling and monitoring sex workers under the Sex Work Act 1994 and other legislation. Licensing is widely shown to create a two-tiered sex industry where only a small percentage of the industry can meet compliance requirements, while the majority of the industry remains illegal.

Licensing limits sex workers’ choices over their working environment by requiring them to work either in a licensed brothel or agency, or register on a permanent database as a small ‘owner-operator exempt brothel’ and work alone or with one other sex worker. Former sex workers have tried to remove their names from this database without success, despite having ceased sex work. The ACT has recently scrapped registration as a failed system.

Special advertising rules also exceptionalise sex work and prohibit sex workers listing their available services or mentioning their health status. Sex workers are subject to mandatory medical testing, and regulations criminalise workers with HIV and STIs, regardless of whether they are working safely. Street-based sex work in Victoria is criminalised and heavily policed, in operations where police pose as clients to entrap sex workers.

Jane Green, a Victorian sex worker states, “If our greatest concern is avoiding police, then we have less time to make decisions and assess our safety".

Fiona Patten MP who is heading the inquiry says, “Victoria has the opportunity to lead and design a regulatory system that meets the needs of a 21st century industry. A model of decriminalisation that incorporates what we know as best practice". Decriminalisation requires the removal of all laws specific to sex work. It positions sex work within existing employment, planning and workplace health and safety laws. It requires expunging historical convictions, removing registrations, introducing anti-discrimination and vilification protections, decriminalising HIV and providing access to free legal and health services.

Victorian sex workers are tired of bearing the risks of government inaction. The Inquiry must prioritise listening to representative bodies of current sex workers as the primary stakeholders. Decriminalisation is simply the first step in systematically rethinking how we support workers' rights. We cannot afford to leave any sex workers behind.

Dr Hilary Caldwell is a UNSW Visiting Fellow at the Centre for Social Research in Health and Dr Zahra Stardust is a Research Officer in UNSW Law.