The so-called 'Australian model' of 'asset recycling' is no miracle cure for US infrastructure problems. 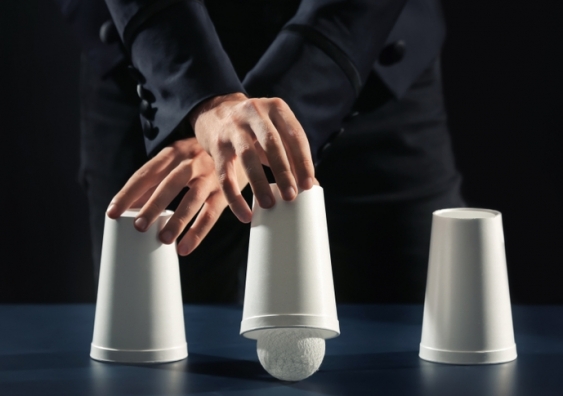 Asset recycling is a shell game, a way to get around government accounting rules. Image from Shutterstock

Anyone who has been to La Guardia airport in New York can attest the dire need in the United States for infrastructure spending.

It’s not just crumbling bridges, pot-holed roads and lousy airports that provide the impetus for infrastructure spending. In recent times Harvard economist Larry Summers has popularised the threat of “secular stagnation” – that near zero real interest rates are becoming the normal condition of the global economy due to lack of demand and profitable investment opportunities. Governments increasing infrastructure spending is a way to combat this.

It is against that backdrop that Australia’s ambassador to the US, Joe Hockey, has been pushing the so-called “Australian model” of “asset recycling”.

As Australian treasurer from 2013 to 2015, Hockey championed the idea of the federal government providing incentives to the state government to sell public assets and use the proceeds to build more infrastructure.

The only problem with the idea is that it’s silly.

Its primary purpose is to circumvent arbitrary government accounting rules and pull the wool over the eyes of unsuspecting voters.

A nice idea, in theory

Here’s a hypothetical example of how asset recycling is supposed to work.

Suppose the government owns an airport that generates $300 million a year in profits from fees paid by airlines, car-parking revenue and rent from retailers selling $7 lattes and bad $18 sandwiches.

The government decides to “recycle” that asset by selling it off. How much does it get? Well, it is going to be some multiple of the cash flow and profit that the airport generates.

Perhaps the government gets enough bidders together to get a 14-times multiple, and so receives $4.2 billion. With that money it builds a toll road, then sells that off to another private-sector bidder, and off we go again.

One objection to this racket is the exorbitant parking fees and $7 lattes. That is, airports, toll roads and the like are natural monopolies and their owners have tremendous market power.

The government could, perhaps, try to impose price controls when it sells the asset. But that would depress the sale price meaning less money for other infrastructure. And price controls never work; there will always be a gap in the contract (e.g. it says one can’t charge more than $6 for lattes so the operator only makes flat whites and charges $7).

Reasons to be sceptical

But there is an even more fundamental objection. When the government sells the hypothetical airport it gives up $300 million in revenue every year to get $4.2 billion immediately. Unless the private operator values the cash flow stream more than the government does, or can generate more cash flow, there has been no value created. All that has happened is that the government gets money sooner rather than later, over time.

Since the government ought to be at least as patient as the private sector, and can borrow long term at 3%, it is unlikely the government values future cash flows less than some infrastructure fund.

So the only value that might be created is from a private operator running the airport more efficiently. It’s probably true it will – but by how much? Even if it does, will the government cut a good enough deal to capture a good chunk of that value for the public?

There are reasons to be sceptical of the government’s negotiating prowess in such matters.

This is not, by the way, a general argument against privatisation. Qantas is a vastly better run and more profitable airline providing better service to its customers than when it was government-owned. There are plenty of other examples.

But the benefits of privatisation flow from factors such as improved access to capital markets, removal of government interference from management decisions, and the motivating power of market-based competition.

Asset recycling involves few if any of these factors.

When a private company make a big investment, it does’t offset the full amount against its profits for that year. Instead it “capitalises” it and depreciates the investment over its useful life (“accrual accounting”). So a $1 billion capital expenditure that’s good for 10 years is charged against profits at $100 million a year.

Governments tend to take the full $1 billion hit in year one (“cash accounting”). This makes any budget surplus smaller, or deficit larger.

Asset recycling is the perfect fix to this accounting problem. The big capital inflow offsets large expenditures on new infrastructure, at the cost of giving up regular annual income.

So let’s see asset recycling for what it really is – and take it out with the other rubbish.