Australia’s GDP was up 3.4 per cent last quarter of 2021, on the back of pent-up consumer spending. Other factors must drive future growth. 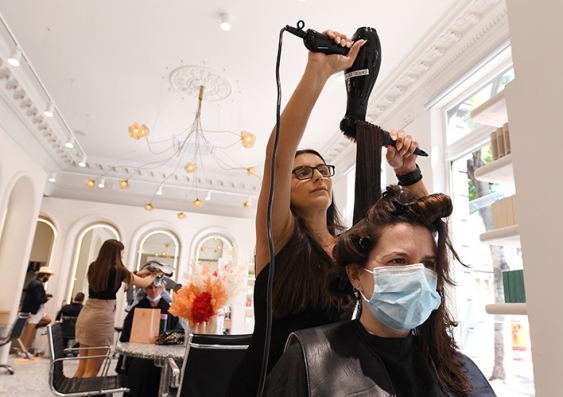 Personal and other services (such as haircuts and beauty treatments) grew 15.4 per cent following lockdown. Photo: Shutterstock

“It’s difficult to make predictions, especially about the future,” American baseball legend Yogi Berra once quipped. When it comes to predicting where the Australian economy is heading the task is made even trickier in the face of war in Europe and uncertainty about the global energy and other markets.

This week there was some good news. Australia’s economic growth (GDP) bounced back strongly in the last quarter of 2021, up 3.4 per cent, according to Australian Bureau of Statistics figures.

This was a turnaround from the 1.9 per cent decline in GDP in the September quarter.

It is often noted, however, that GDP is an imperfect measure – it doesn’t capture things such as unpaid work. It is also “backward-looking”.

The figures tell us what happened at the end of last year, at a time when what we would really like to know is what is going to happen this year, and beyond.

That said, they provide useful clues.

The 3.4 per cent growth was generated almost entirely by consumer spending (3.2 percentage points) with the rest due to changes in inventories and trade.

Government spending made no contribution. Investment (both private and public) was actually a drag, knocking 0.3 and 0.1 percentage points off growth.

This isn’t all that surprising. After months of lockdowns in much of Australia, people wanted to spend.

In the September quarter household savings soared to 19.8 per cent of income. In the December quarter they fell to 13.6 per cent as people splurged on things they couldn’t spend on while they had been locked down. 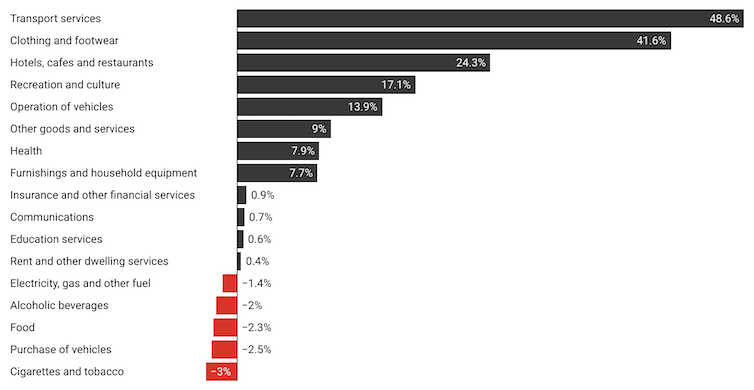 Spending on “accommodation and food services” jumped 26.1 per cent. Personal and other services (such as haircuts and beauty treatments) grew 15.4 per cent. Air transport expenditure rose a massive 56.5 per cent, though, as economists say, it was was “strong growth off a low base”.

In other words, many people couldn’t get a haircut or go to a restaurant or fly in the third quarter of 2021. In the fourth quarter they could – and did.

This is reinforced by the fact the strongest ouput growth (6.7 per cent) was in New South Wales, where the lockdown arguably bit the most mid-year.

Of course, Omicron hit hard in mid-December, but too late to have a big impact on the quarterly figures.

We will see more of Omicron’s impact in the numbers for the March quarter, due to be released after the May election.

On the plus side, households still have a large stock of savings compared with pre-pandemic levels.

The $424 billion consumer “war chest” Treasurer Josh Frydenberg has rightly been talking up puts us in a good position to spend, building a sustained recovery.

Can Australia’s spending-led-recovery continue in 2022? Perhaps, but there are reasons to be concerned.

The mechanical point is that the GDP figures for the December quarter are only impressive when you fail to remember they were bouncing back from a decline of 1.9 per cent in the September quarter (so-called negative growth).

A less mechanical concern is that the world is now awash with uncertainty.

The largest European conflict since the second world war threatens to upend everything from peace and security to global supply chains and financial markets.

The Reserve Bank governor referred to “a major new source of uncertainty” after his board meeting on Tuesday.

Domestically, we still don’t know whether inflation is just returning to regular programming or getting away from us.

Like many economists, I favour the former interpretation. Anyone who tells you they know for sure is delusional.

Aggressive wages claims, if successful, could be the genesis of a wage-price spiral, sending inflation systemically higher, but we don’t know.

The Reserve Bank is going to raise interest rates sooner rather than later.

It could be mid-year or delayed many months, but eventually rates will climb to align with the so-called “neutral rate of interest” - the level that keeps the economy on an even keel, with unemployment low and inflation stable.

There is considerable uncertainty about what that rate is.

In the 1990s and early 2000s the Reserve Bank thought it was between 3 per cent and 4 per cent. Now it’s hard to dispute it is lower, but not as low as 0.1 per cent, where rates are now. Either way, it suggests meaningful rate rises are coming.

All of these factors will feed into future rate rises – which will dent spending by Australia’s highly leveraged households.

In short, getting sustainable GDP growth back to the 3 per cent plus it used to be will require more than just a consumer spending binge. It will require the hard work of productivity growth.

In 2021, for the first time, the federal budget set out four years of “forecasts” instead of two years of forecasts and two years of “projections”.

It has an important implication. It means this year’s budget will need to take a more formal and rigorous view about the next four years – in particular about the international environment in which Australia sits.

The budget is due in less than four weeks. The big question is what will be needed to drive the economy in the years ahead. It will require more than a rebound in restaurant meals and haircuts.