The Productivity Commission’s startling finding is that passing on wealth actually cuts inequality. 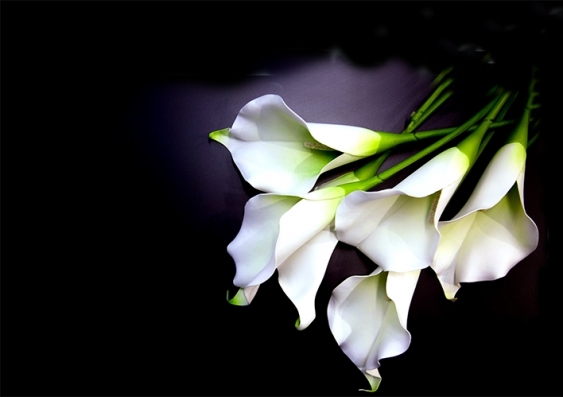 Australia became one of the first nations in the world to abolish death duties in the late 1970s. Image: Shutterstock

If you are worried about inequality you probably lament the end of death duties.

At first in Queensland and then in the rest of the country, Australia became one of the first nations in the world to abolish death duties in the late 1970s.

Surely an inheritance tax (that’s what a death duty is) would cut the size of inheritances, reducing the intergenerational transmission of inequality.

Actually no, according to a groundbreaking study released on Tuesday by the Productivity Commission. 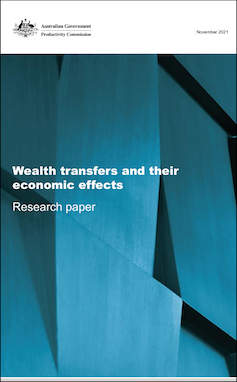 The commission used datasets including tax returns and probate records to look at how much money is passed on in inheritances and gifts and where it goes.

The striking finding is that an awful lot is passed on.

In 2018 it was an astonishing A$120 billion, way in excess of the $80 billion the Australian government spent on health, and approaching the $170 billion it spent on social security and welfare.

An even more astounding finding is that these transfers actually reduced inequality.

One of the authors of the report, Commissioner Catherine de Fontenay, summarised the finding this way:

When measured against the amount of wealth they already own, those with less wealth get a much bigger boost from inheritances, on average about 50 times larger for the poorest 20% than the wealthiest 20%

It isn’t that the biggest inheritances don’t go to the already-wealthiest fifth of the population. Of course they do. This graph shows how big, in thousands of dollars.

The extra thing the commission discovered was that as a proportion of the wealth they already have, inheritances lift the wealth of the bottom fifth of the population far, far more than that of people better off.

And this isn’t a peculiarly Australian phenomenon. The commission finds it is true in most advanced economies.

So ought we to make sure inheritance taxes stay dead?

In our forthcoming book “From Free to Fair Markets: Liberalism after COVID”, Rosalind Dixon and I argue that’s exactly what we should do.

In 2010 the late Emmanuel Farhi and Ivan Werning examined optimal taxation in a setting where society cared about current and future generations.

They found that in such a situation, the best death duty would be negative – that we should subsidise inheritances to stop parents consuming too much and children getting too little.

What about a progressive inheritance tax?

One way to get the benefits of inheritances and still fight inequality would be to exempt from tax modest-size bequests and tax larger bequests even more.

This could be done by making inheritances of up to, say, $100,000 tax-free, and everything over that taxed (increasingly) heavily.

But there would be a big incentive to come in just under the cap.

Just as retirees moved to Queensland to avoid death duties (and appeared to adjust the timing of their deaths) retirees with a lot of wealth would find it worthwhile to give big gifts to their children ahead of their deaths – which would have to be caught by a gift duty.

The gift duty might have to take in deposits for houses and childcare and school fees (and to be equitable, perhaps childcare in kind provided by grandparents!).

And then you would get into really murky territory. People would want to exempt things such as homes, which could lead to even more upward pressure on home prices if more and more wealth got transferred in the form of homes.

It isn’t going to happen

In any event, in Australia, it isn’t going to happen.

Death duties are common around the world. Across the OECD, 24 countries have inheritance or estate taxes, among them the US, the UK, Korea and Germany.

Canada, New Zealand and Australia are among the smaller number of countries that had such taxes and then withdrew them.

The mere (incorrect) assertion that Labor would bring them back helped cost it the 2019 election. 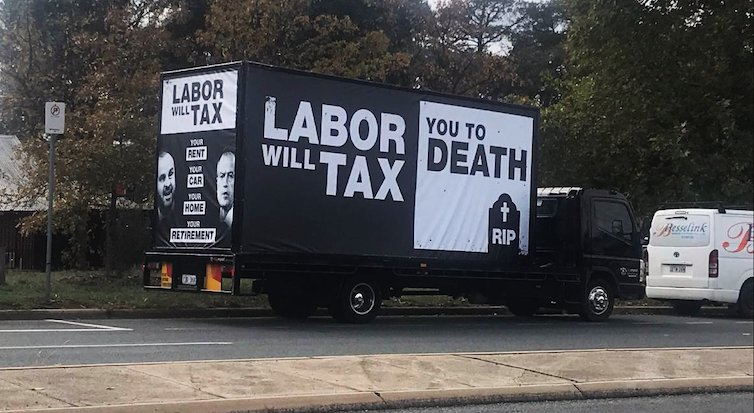 A mobile billboard parked at locations around Canberra during the 2019 election. Sally Whyte

Labor no longer has the stomach for a tax on emissions that would actually work.

It most certainly doesn’t have the stomach for one that would make it harder for parents to pass on things to their children, probably worsen inequality, and complicate the tax system even further.