Opinion Vital Signs: Italy is broke, and the markets have lost all faith in its elected politicians

Italy's economy is verging on bankrupt and its election results have dealt a hammer blow to the prospects of fixing things. The best option, financially at least, may be to put someone else at the helm. 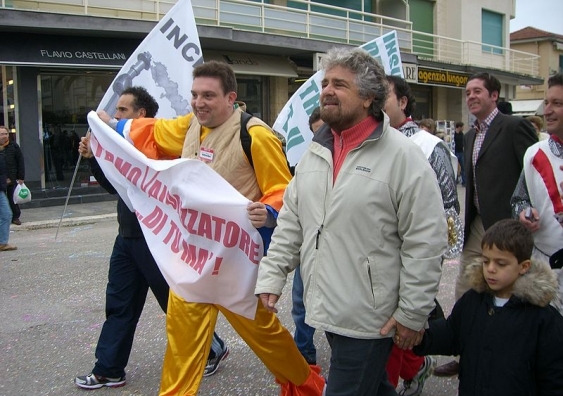 We are now in another full-scale European crisis.

Salvini has responded to the refugee crisis by saying that Italy needs “a mass cleaning – home by home, street by street, neighbourhood by neighbourhood”. Grillo, meanwhile, has championed the idea of celebrating “V-Days” – short for the Italian vaffanculo (the various English translations all begin with an expletive and end with either “off” or “you”) – taking aim at the political elite as part of an eccentric grab bag of largely anti-capitalist policy ideals.

Setting aside the bizarre prospect of a coalition between the far right and the loopy left, as a prospective government the pair do not bode well for Italy or Europe. Although officially disavowing any move to exit the Eurozone, they almost surely would have sought to do so. That would have triggered an automatic exit from the European Union, perhaps inevitably nicknamed “Quitaly”.

Italy, and the European experiment with it, might have bled out slowly.

But when Italian President Sergio Mattarella refused to allow the putative coalition to form government in its currently proposed form, all hell broke loose.

With a second election now on the cards, the spread on two-year Italian bonds quickly jumped to around 300 basis points over German bonds. That’s the market suggesting a staggering risk of default.

Yesterday Mattarella tried to calm things down by suggesting that he could appoint an interim technocratic government, giving Salvini and Five Star’s current leader, Luigi Di Maio, more time to produce a list of ministers that he could live with.

That’s probably the right thing to do, but it’s tough to get the toothpaste back in the tube. The markets are spooked. It will take a lot more than the prospect of securing a coalition government between two lunatic-fringe parties bent on getting Italy out of the euro to calm things down.

Greece is the word

Italy is Europe’s third-largest economy and it has public debt of €2.3 trillion. A bank run on the Italian economy, similar to what happened in Greece in 2015, would be a cataclysm that would likely be impossible to stop without Italy exiting the euro.

The seeds of Italian populism were fairly predictable in the wake of the great recession. Italy’s unemployment rate doubled to more than 12% and is still at 10.9%. Youth unemployment peaked at a 42.7% in 2014 and remains around 35%. GDP fell by more than 7% per year at an annualised rate and only turned positive in 2014. Real GDP is still below its 2007 level. Italy’s current GDP growth of 1.5% is the lowest in the Eurozone.

The question is what to do about it. Radical spending promises that can’t possibly be fulfilled without totally blowing the government’s books are not the answer. Having them delivered by an unstable government comprised of a loose coalition of warring tribes is less encouraging still.

On the other hand, fresh elections will just spook the markets even more.

Right now, Mattarella’s proposed technocratic government looks like the least worst option. There is an open question about how long it should govern for, but a reasonable starting point would be three years. That might give it time to get the Italian economic ship back upright. Enough time to take some tough decisions. This, of course, simply cannot be guaranteed under the constitution, so all Mattarella can do is install it and hope that the prospect of stability becomes self-reinforcing.

That is the kind of government that former Greek finance minister Yanis Varoufakis would hate, given his fierce resistance to the austerity imposed on Greece by its creditors. And I’m sure it will take about five seconds for me to be labelled a Washington Consensus, IMF-loving neoliberal for suggesting it. It would certainly attract plenty of criticism in Italy, given the strong anti-establishment sentiment that created this crisis in the first place.

But, to use the language of bankruptcy, the bottom line is that Italy is in political and economic Chapter 11. It is broke. It’s not technically insolvent just yet. But it will be, as they say in debt contracts, “but for the passage of time”.

It’s time to bring in the receivers to restructure. There needs to be serious microeconomic and labour-market reform, of the kind Emmanuel Macron is trying to implement in France. There also needs to be some attempt to get the debt under control. Lowering the interest rate through increased confidence would be a good start.

This would also help the rest of Europe. Perhaps there is some hope that German Chancellor Angela Merkel would be grateful, and thus more amenable to assistance measures for Italy. She certainly could not be less well disposed to help out than at present.

Vital Signs: this is a slowly deflating property bubble, for now