Without academic freedom and rule of law it’s hard to see how China’s economy can continue to grow so fast. 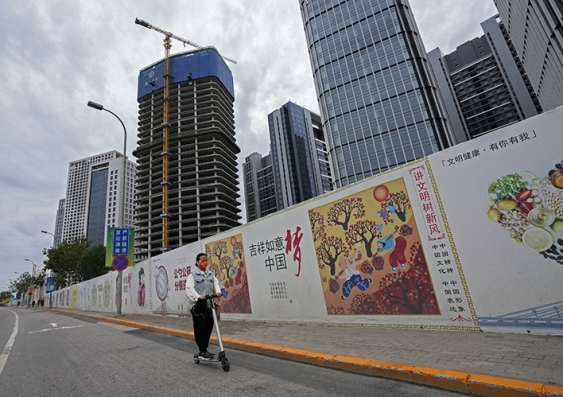 China's economic growth may have slowed, but it's not slow by Australian standards. Photo: Andy Wong/AP

China’s economic momentum is slowing. Official figures published this week show GDP growth in the last quarter came in at annual rate of “just” 4.9 per cent. This compares with 7.9 per cent annualised GDP growth for the previous quarter.

I say “just” because the last time the Australian economy grew this fast was — checks notes – 80 or so years ago. So China’s economic growth may have slowed, but it’s not slow.

A number of supply disruptions have caused the drop. Industrial production such as steel making has been hit by power outages. Other parts of Chinese industry such as the automotive sector have been hit by the global shortage of silicon chips. And there’s the debacle of Evergrande, China’s second-largest property developer, which may collapse without a government bailout and has damaged the entire construction sector. It has been an almost biblical confluence.

But even without such factors, economics says China’s growth rate must inevitably slow.

Though the US can still claim to be the world’s biggest economy on these figures, a more nuanced measure such as “purchasing power parity” – which considers what each currency can buy rather than official exchange rates – shows China has already overtaken the US due to these different rates of growth.

The difference reflects one of the most important facts in the theory of economic growth – known as “conditional convergence”.

Up until a few decades ago most economists expected the per capita wealth of nations to eventually converge, as the poorer countries caught up to the richer ones. As Harvard economics professor Robert Barro wrote in an influential 1991 study:

In neoclassical growth models […] a country’s per capita growth rate tends to be inversely related to its starting level of income per person. In particular, if countries are similar with respect to structural parameters for preferences and technology, then poor countries tend to grow faster than rich countries. Thus, there is a force that promotes convergence in levels of per capita income across countries.

In other words, the theory was that nations’ per capita GDP should converge because in poorer nations the “marginal product” of capital – the return from adding an extra dollar of capital – is very high, leading to high growth. As they become wealthier, the marginal return from capital declines, meaning the growth rate slows. 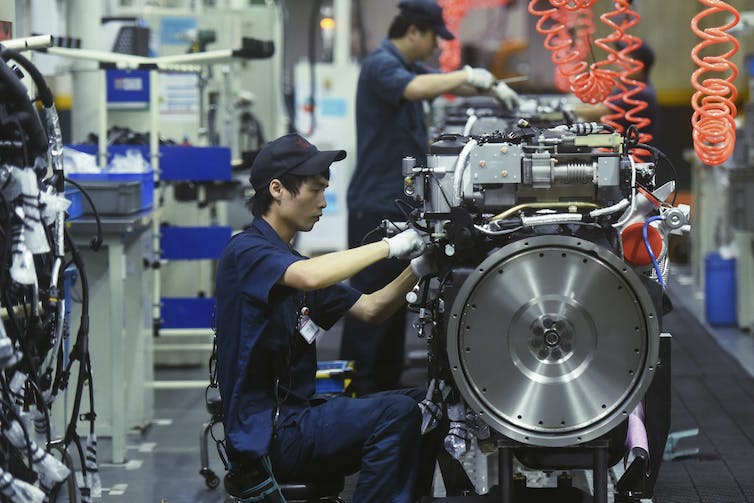 China’s automotive industry has been hit by the global shortage of computer chips. Chinatopix/AP

It’s a good theory with one problem: real-world data says something different.

When Barro (and others) examined the empirical evidence – analysing the GDP rates of 98 countries from 1960 to 1985 – they found there was convergence, but it was “conditional”.

But countries with different GDP levels and different structural characteristics did not necessarily converge.

Education and rule of law

This provides a useful lens for thinking about the future of the Chinese economy.

Aside from the symbolic question of when the Chinese economy will, by any measure, be the world’s largest, the substantive question is how much faster China’s per capita GDP will continue to grow.

This is relevant for countries such as Australia that benefit from Chinese demand for goods and services. The more China’s per capita GDP grows, the greater its demand not just for iron ore and coal but also wine, lobsters, beef, education and overseas holidays.

The lessons of economic growth tell us that for China to continue to grow rapidly it will need to invest further in its human capital, and ensure there is a stable and predictable legal regime.

These look like challenges. China’s education system is not nearly as sophisticated as the best in the world (like the US or France). Which is why so many parents send their children to universities abroad.

Can it develop a truly world-class university sector? Great academic institutions require empowering great minds to engage in free inquiry. Will the Chinese Communist Party ever be down with free speech? Right now, under Xi Jinping it is going in the other direction.

Then there’s the lack of a rule of law. A predictable legal regime means serious corruption cannot be tolerated, and foreign capital must trust that it won’t be expropriated. How China navigates the Evergrande crisis will be informative on both counts.

Every challenge is an opportunity, as the saying goes. But the fear is these issues – education and rule of law – may be, in the words of Sir Humphrey Appleby, “insoluble opportunities”.