Opinion Vital Signs: So far, it's more of a house price blip than a bust in the making

Prices are off, but from unprecedented highs. It could be a one-time adjustment. 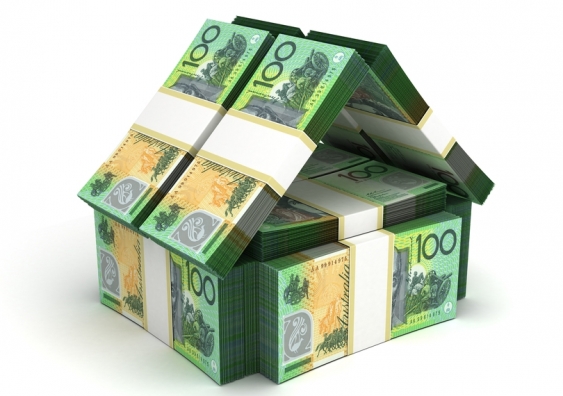 According to the widely-used Corelogic Hedonic Home Value Index, home prices were down 4.8% across the nation in 2018. Sydney was particularly hard hit, down 8.9% and prices in Melbourne slipped 7.0%. Hobart was a bright spot, but an exception, up 8.7%.

You might be dying to ask what “hedonic” means. The word relates to pleasure, in this case the pleasure of owning a home.

But what if the “pleasure” that was sold in that month was different from the pleasure that was sold the previous month? What if, for example, in December mainly good five-bedroom mansions in good suburbs were sold, whereas in January it was mainly one bedroom dumps located where people didn’t want to live? The average recorded price would go down even if the price of individual houses had not.

The results are not good news for current home owners, but they are worth putting into perspective.

How far back do you want to go?

So, should we focus on the latest very recent drop in prices, or the incredibly strong growth over the previous 20 years?

The following chart from Corelogic’s Head of Research Tim Lawless demonstrates that long-run growth in Sydney, as well as the fact there have been pretty significant short-run dips along the way.

What does a Sydney housing cycle look like? Here's what happened over the past 4 downturns & 5 upswings based on @corelogicau hedonic series pic.twitter.com/x2PwSiGks8 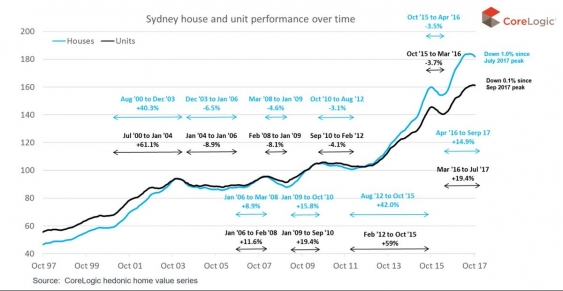 Sydney house and unit performance over time. Image from CoreLogic

The most obvious point to make is that if you bought recently then the current price drops hurt. If you had a 20% deposit, the latest falls in Sydney and Melbourne have wiped out about half of your starting equity; more if you factor in stamp duty and moving costs.

If you bought a longer time ago, you might feel the sting of the latest price slide just a touch, but you are still well ahead.

So from a personal perspective, it’s natural that some people will care a lot about what’s happened, and others won’t much mind.

What’ll it mean for the economy?

The biggest concern is the so-called “wealth effect”.

When home prices fall, homeowners feel (and are) poorer.

It affects how much they are prepared to spend, although as the Reserve Bank and others have pointed out the size of the effect remains unclear.

But it might be bigger than you think. Many of us aren’t rational. We have “reference points”. If, because of the barrage of media reports at the time, we use the start of 2018 (the top of the market) as our reference point, then even those of us who have owned properties for a long time will feel poorer. And because of that, we might spend less.

Since private spending accounts for well over half of Australia’s gross domestic product, spending less can have a big effect.

What’ll it mean for the banks?

Australia’s big four banks are the biggest lenders to residential property owners and are among the biggest companies in Australia.

Could the slide in property prices put them in jeopardy?

If a few homebuyers had a 20% deposit and suffered at most maybe a 15% fall in prices, there isn’t a problem, right?

That view is basically correct – except when it’s not.

Some lenders have been bulking up loans to borrowers who earlier took out, say, A$600,000. When their homes came to be worth, say, $1.5 million they lent them more - boosting their loans by most of the extra value.

The practice calls into question the view that only a small number of the most recent buyers are highly leveraged. Many more folks could be – but without the loan-level data that the banks have, we don’t know.

At the heart of all of these questions is whether the 2018 price falls are likely to continue, which would mean them getting much bigger.

That depends on what caused them.

A key part of it was that banks (at least the big four) lent less than they used to. With less money borrowed, there was less money to bid up prices.

As I have noted before, Australian banks were arguably lending too much; about 25% more than US banks to equivalent borrowers.

Post Royal Commission, that’s changed. As has been widely discussed, banks are now looking at borrower’s expenses much more carefully. Too carefully, according to Treasurer Josh Frydenberg who has called on them to lend more.

The important point is that if there has been a one-off adjustment in the borrowing capacity of Australians, then the price falls should stop fairly soon: predictions of more modest falls in 2019 followed by a reset and uptick in 2020 mightn’t be too far off the mark.

If so, the short-term slide will remain for most people, just that.

Vital Signs: this is a slowly deflating property bubble, for now