An estimated 90 Australians are now fighting with and supporting terrorist groups in Syria and Iraq. Are we placing too much weight on new laws' power to combat extremism, asks George Williams 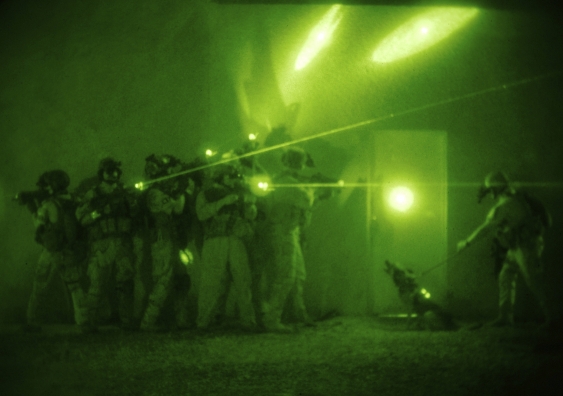 The threat of violence at Anzac Day commemorations next weekend following raids and arrests in Melbourne, has again focused attention on Australia's counter-terrorism strategies. The most prominent danger is from people returning home after fighting in Iraq and Syria. The Abbott government has responded through new anti-terror laws. Unfortunately, the laws are proving ineffective. Australians are still leaving to fight overseas and are returning hardened and well trained, yet charges are rarely laid under the foreign fighter laws.

The laws themselves could not be more severe. A life sentence can be imposed for engaging in hostile activity in a foreign country, or for even preparing to do so. Ten years imprisonment also applies to anyone who merely steps foot in the Mosul district in Iraq or the Al-Raqqa province in Syria, areas declared no-go zones by the Australian government.

Despite these laws, it is estimated that at least 90 Australians are fighting with and supporting terrorist groups in Syria and Iraq. More than 20 have been killed, and about 30 fighters have returned to Australia. Others have joined groups that fight against IS.

The laws are not deterring young radicalised Australians intoxicated with the idea of fighting overseas. Prosecution is also of limited effectiveness due to the absence of witnesses or other forms of evidence that can attest to their actions. Without this, it is impossible to prove beyond reasonable doubt that a person is engaged in hostile action abroad.

The problem is a large and difficult one, with more than 20,000 foreigners having travelled to the Middle East to take part in these wars. No country has come up with an answer. What has become clear though is that tough laws are not the solution by themselves. Indeed, an overzealous legal approach can contribute to the problem by fuelling the radicalisation process.

It is in this respect that Australia has got its strategy wrong. We place too much weight on the idea that terrorism can be prevented by enacting new laws. Since September 11, 64 anti-terrorism statutes have been enacted by the federal Parliament. During the time of the Howard government, a new anti-terror law was passed every 6.7 weeks.

These laws are designed to keep Australians safe, but also produce a sense of grievance and alienation in the Muslim community. In late 2014 the federal Parliament enacted its new foreign fighter laws, and large-scale raids were undertaken in Sydney, Brisbane and Melbourne. In response, Sheikh Wesam Charkawi, a high school chaplain working in Western Sydney, said: "I work on a daily basis with the youth and what I see at the moment is severe distress regarding the new counter-terrorism laws. The Muslim community feels targeted and besieged."

This has produced a dangerous dynamic that advantages those who wish us harm. Terrorists need nations to overreact in their attempts to prevent future attacks. This produces a cycle whereby an attack feeds a reaction that enables a future attack. Hence, extreme anti-terrorism laws can cause a community response that promotes radicalisation and undermines trust in government agencies.

Australia could have avoided, or at least mitigated, this by drafting anti-terror laws more consistent with community values and human rights standards. Our leaders could also do more to emphasise social cohesion, and the value of all members of the community. Instead, politicians have contributed to division, such as through Prime Minister Abbott's comments that  "everyone has got to be on Team Australia" and his singling out of the Muslim community as not doing enough to combat terrorism.

Fortunately, there are positive counter examples, such as NSW Police Minister Troy Grant. In his first days on the job, he talked of the need to shift the balance away from present approaches to those that invest more in prevention and community engagement. Other leaders have also recognised how far we have to come. Victorian Premier Daniel Andrews said in response to last Saturday's Anzac Day arrests that violent extremism and radicalisation is "a threat that confronts us all; it's a threat that challenges us, and in truth, it's a threat that we don't really properly understand."

Australian governments came late to the realisation that anti-terrorism laws need to be complemented with community-based initiatives. These began under the Howard government in 2005 but the Abbott government cut the funding in the 2014 budget. The government then back-tracked and in August 2014 announced it would invest $13.4 million in community intervention programs to counter violent extremism. This money is a drop in the ocean compared to the billions being spent on policing, surveillance and a range of coercive measures.

All this reflects the focus of the government upon coercive laws and strategies. Community engagement and counter radicalisation programs are more of an afterthought, and are not a major part of the government's overall plan. This must change if we are to stop the flow of Australia's disaffected youth to the conflicts in Iraq and Syria.

George Williams is the Anthony Mason Professor of law at UNSW, and an author of Inside Australia's Anti-Terrorism Laws and Trials.

UNSW involved in international study into media reporting of terrorism