Opinion What the Bureau of Statistics didn't highlight: our continuing upward redistribution of wealth

Better data would tell us more about the ultrawealthy, but they really do seem to be growing more wealthy, more quickly, than the rest of us. 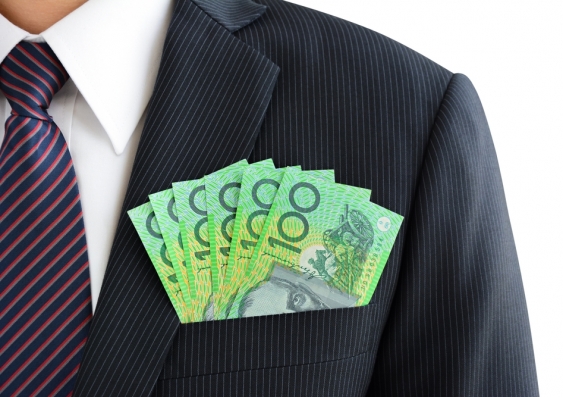 The Australian Bureau of Statistics insists inequality has been stable, but its data suggests something less rosy. Image from Shutterstock

The results of the latest Australian Bureau of Statistics biennial survey of income and wealth met have met with an uneven response, perhaps in part due to a slipshod press release.

Income inequality has remained stable in Australia while income growth has been slow, according to new information released by the Australian Bureau of Statistics today.

Oddly, the press release didn’t include data to back up its conclusion. That was left for reporters and analysts to find, diving into the trove of more detailed information assembled by the bureau, from which a somewhat different picture emerged, particularly for wealth.

They also noted an increase in the so-called Gini coefficient, commonly used by the bureau and others to measure inequality.

And they noted that the “ultrawealthy” were probably under-counted in the survey, as is to be expected in essentially voluntary random surveys.

In the Sydney Morning Herald and Age, Shane Wright and Eryk Bagshaw tracked the trends since 2003-04, when the bureau began its income and wealth survey.

Examining “quintiles” (which divide Australia’s households into five equally sized groups, in this case from least wealthy to most wealthy), they found an increasingly divided society.

Their captions read: “The wealthiest 20% have left the rest behind” and “The rich are getting richer”. 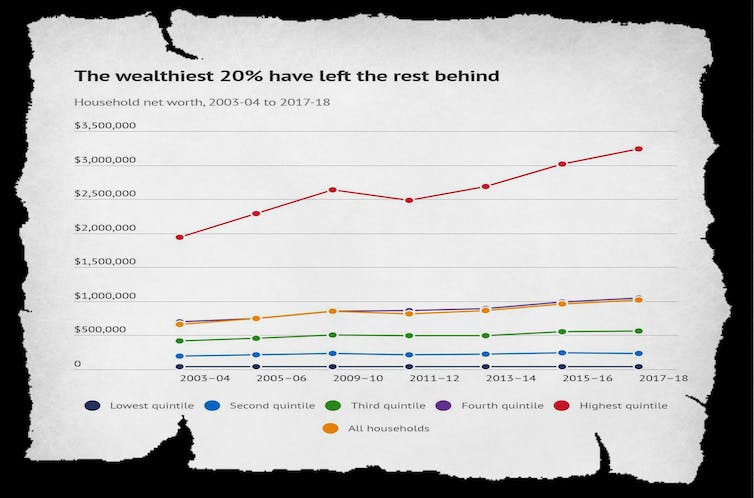 Both sets of journalists were right not to accept the bureau’s sunny headline.

That is not a picture of stable inequality.

It is more reasonably described as a picture of gradually increasing inequality, of the kind we would expect given the underlying dynamics of modern Australian capitalism.

Unchecked, things will get worse

In the absence of deliberate redistribution, the inequalities associated with accumulated wealth tend to increase over time.

Unless actively restrained, the trends identified (but not publicised) by the bureau suggest that Australia will become increasingly unequal.

Yet there is more to the story than correctly describing the data presented.

There is also what’s missing. The survey does not present a figure for total household wealth. This means we don’t know how much wealth it didn’t find.

An increasing amount of wealth is missing…

We will get a good idea in about a year when the bureau reconciles its income and wealth survey with the Australian National Accounts.

The discrepancies appear to be associated with understatements of the value of property assets, loans, shares, trusts, and other equities of the type mainly held by wealthy Australians.

…and the ultrawealthy are invisible

The bureau’s released data ignores the distribution of wealth at the very top.

The data is reported in quintiles (fifths) and percentiles a decile apart, but inequality is likely to be growing the fastest at the very top where the data isn’t reported.

We really need to know

Statistics are windows on change. Despite our criticisms, the bureau’s biennial income and wealth survey gives us the best view of inequality we’ve got, but large areas remain foggy.

In research for the Evatt Foundation, we have used data from the Bureau of Statistics, Organisation for Economic Co-operation and Development and national accounts to estimate that, for the first time in more than half a century, the richest 10% of households own more than half of Australia’s private wealth.

The Evatt Foundation’s results seem to stand up well, but governments should really be producing better data themselves.

Inequality and its harmful effects on economic output and stability are growing. We owe it to ourselves to find out by how much.

Engaging with the IMF on inequality