Opinion What would a First Nations Voice to Parliament actually look like in practice?

Prime Minister Anthony Albanese announced Labor’s commitment to the Uluru Statement from the Heart. This means there may soon be a First Nations Voice to Parliament. However, there is a journey ahead. 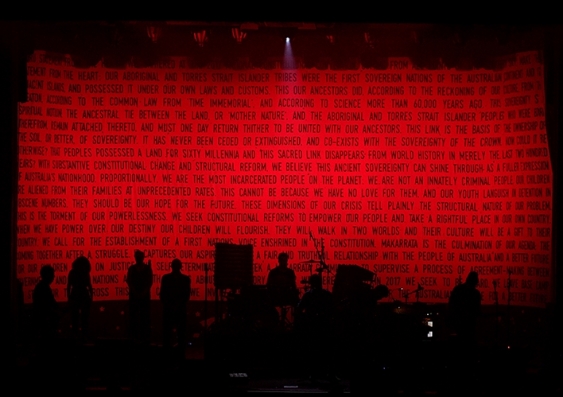 A projection of the Uluru Statement from the Heart. Dan Himbrechts/AAP Image

Prime Minister Anthony Albanese began his election night victory speech by declaring: “I commit to the Uluru Statement from the Heart in full.” This commitment, delivered on the eve of the fifth anniversary of the Uluru Statement, is monumentally important to First Nations people and to the nation.

Albanese’s words stand in stark contrast to those of former prime minister Malcolm Turnbull, who initially rejected the Uluru Statement in 2017, and show how far the public debate has come. They mark an important shift away from the Morrison government’s more limited co-design process on a Voice to Parliament.

The Uluru Statement was issued to the Australian people following the First Nations National Constitutional Convention in 2017. The convention followed a series of 13 regional dialogues led by the Referendum Council, at which a representative cross section of the Indigenous community had their say on what constitutional change they wanted.

This was the first time the Indigenous community had direct input into this process. The convention produced a consensus position calling for a First Nations Voice to Parliament enshrined in the Constitution, followed by a Makarrata Commission to supervise agreement-making (treaty) and truth-telling.

These reforms have long been targets of the Indigenous community that aim to empower Indigenous peoples when it comes to government decision-making and to get on with the unfinished business of treaty and truth-telling.

The first stage of the Uluru reforms would see the establishment in the Constitution of a body, or Voice, that would advise parliament on matters relating to Aboriginal and Torres Strait Islander peoples. Constitutional entrenchment is important because it would give the Voice special legitimacy and provide it with stability and certainty. The details of its design would be determined by parliament.

Changing the Australian Constitution requires a referendum. In April, a gathering of the Uluru Dialogue issued the Yarrabah Affirmation, nominating two possible dates for a Voice referendum: May 27 2023 (the 56th anniversary of the 1967 referendum) or January 27 2024.

The Voice and the new parliament - how would it work?

The formal process for constitutional change begins in the federal parliament. The government introduces a referendum Bill setting out its proposed amendments to the Constitution. If the Bill is approved by absolute majorities in both the House of Representatives and the Senate, the proposal can then be put to a referendum. If one house approves the Bill but the other rejects it, a referendum can still proceed if the approving house waits three months and then passes the Bill a second time.

Labor has pledged to build consensus for its Voice proposal across the parliament. It has a strong platform to do this. The Greens have said they want progress on treaty and truth-telling first, but won’t stand in the way of any genuine reform, including a Voice. And most independent MPs, both new and existing, are also supportive.

This would be enough to pass the referendum bill through the parliament. Labor has the numbers in the House of Representatives, and could get the bill through the Senate with the backing of the Greens, the Jacqui Lambie Network and other supportive senators such as independent David Pocock. Beyond this, Labor will want to secure as broad a consensus as possible.

The big unknown is what position the Liberal Party will take. The Morrison government opposed a constitutional Voice, preferring instead to legislate to establish several regional bodies. The party nonetheless remains open to a referendum, and many Liberal MPs support the Uluru Statement. With Peter Dutton all but certain to be the party’s next leader, it remains to be seen whether the party, many of whose MPs do support change, will support the bill or not.

After parliament passes the bill, a referendum must be held within six months. The Constitution requires the proposed amendments be approved by both a national majority of voters and a majority of voters in at least four of the six states.

The referendum record shows how difficult it is to change the Constitution. Since Federation in 1901, just eight of 44 proposals for constitutional amendment have been approved by voters. The last time we voted yes at a constitutional referendum was in 1977. Is there any reason to think that this time it will be different?

In the Voice’s favour is the fact it is popular with voters and that popularity is growing. This month, ABC’s Vote Compass found 73% of Australians agree the Constitution should be amended to establish a Voice to Parliament. That was up from 64% in 2019.

Also significant is the fact the proposal for a Voice to Parliament has emerged from a long period of public deliberation. This has been a feature of previous successful referendums, including the 1967 vote on extending federal law-making power to Aboriginal and Torres Strait Islander peoples.

What isn’t yet clear is whether the Voice proposal will have bipartisan support. So far, no federal referendum has gotten up without it. This fact has led some to conclude that bipartisanship is an essential pillar of referendum success.

But this overstates the importance of bipartisanship. The lessons of past referendums are now a bit stale. What held true some decades ago isn’t necessarily the case today. As the recent federal election showed, major parties hold less sway over voter choices than they once did, and social media has expanded the information and opinions that people can access.

The conventional wisdom also ignores the fact that Australians voted Yes at the same-sex marriage survey in the absence of bipartisanship. And they have done the same in constitutional referendums held by state governments.

After the election, Linda Burney, Wiradjuri woman and the incoming Minister for Indigenous Australians addressed this question. She said Labor hopes to secure bipartisan support but will proceed without it and the government remains committed to holding a referendum in its first term, regardless of the opposition’s position.

The path to a constitutionally enshrined First Nations Voice has become more likely with the election of the Albanese government. In the coming months the government should aim to further grow public awareness and continue forging consensus within the parliament. This would build on an already strong foundation for a successful referendum in this parliamentary term.

Australians are showing they are ready to accept the Uluru Statement’s invitation to walk with First Nations people in a movement for a better future. Now our nation’s leaders are finally catching up.