George Williams asks: What should Malcolm Turnbull do if he receives a call seeking our involvement in an ill-conceived foreign conflict? 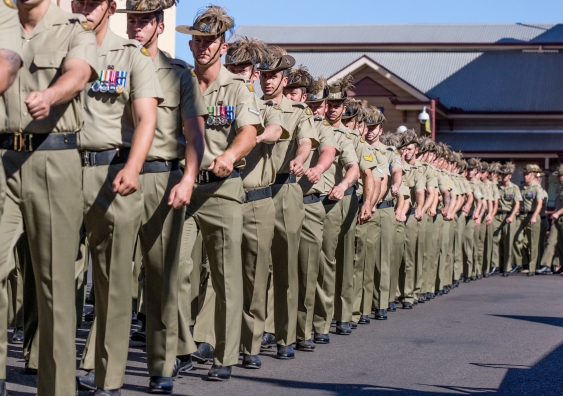 OPINION: Donald Trump is proposing a $54 billion increase in US defence spending. He says this is needed to ramp up the fight against ISIS. His Secretary of State Rex Tillerson has also suggested the US may take pre-emptive military action against North Korea. On these and other fronts, the President is laying down a more aggressive and interventionist military policy than his predecessor.

This poses great challenges for Australia given our record of following the US to war. Australian governments have long sought to obtain US protection by acquiescing to such requests, including by taking part in the Korean, Vietnam and Iraq wars.

It remains to be seen whether Australia will provide the same support to President Trump. What should Malcolm Turnbull do if he receives a call seeking our involvement in an ill-conceived foreign conflict? Unlike other nations, we are ill-prepared for such a request. This is because we have yet to come to terms with our involvement in the last major US-led war, that in Iraqi from 2003.

Australia's position stands in sharp contrast to that of the UK. The UK has struggled for years to come to grips with the decision of Prime Minister Tony Blair to commit UK forces in support of the US in Iraq. Debate in the UK has been long and bitter, causing later UK Prime Minister David Cameron to say that trust in politics could only be restored if members of Parliament, rather than the Prime Minister, have the final say over whether to go to war.

Britain grappled with these issues by establishing an independent inquiry chaired by Sir John Chilcot. It ran for seven years, and reported in 2016 with a damning set of conclusions. It found the UK went to war after Blair promised US President George W. Bush: "I will be with you, whatever."

This commitment was honoured despite evidence Iraqi leader Saddam Hussein did not pose an imminent threat. It produced a willingness to go to war in breach of international law, based upon the misrepresentation of faulty intelligence. These actions inspired the insurgency in Iraq and have enabled the rise of ISIS.

One of the key lessons learnt by the UK is that the decision to go to war should not be left to the prime minister and cabinet. It is unwise to vest such power in one person, as they may exercise poor judgment, be tempted by political opportunism or be blindsided by personal relationships with other leaders.

Parliament should pass a law requiring that it debate any proposal to commit Australian troops.

The UK has acted by overturning centuries of convention. It has moved to a system in which Parliament must be involved in any decision to go to war. This is reflected in a new convention set out in the UK Cabinet Manual in 2011. It states that, except in an emergency, troops should not be committed until the House of Commons has an opportunity to debate the matter.

The strength of this convention means UK governments are unlikely to act contrary to the will of Parliament. In 2013, the House of Commons debated a government motion that the UK join US-led strikes in Syria. The motion was defeated, and Prime Minister Cameron responded by saying he would respect the result. The US was informed the UK could not accede to its request.

Like the UK, Australia joined the US in its war in Iraq. Unlike the UK, we have failed to learn from that conflict. Australia has not experienced a long public debate on our involvement, nor has any government established an independent inquiry into our actions. Consequently, Australia has not followed the UK in altering who has the power to take the nation to war.

This leaves Australia vulnerable to making poor decisions when faced with pressure from the US to join an overseas conflict. Our Prime Minister does not have the same opportunity as his UK counterpart to indicate that this must be debated in Parliament, and that he will need to honour the result. Instead, an Australian leader may face enormous pressure to fall into line. Trump may even see this as recompense for honouring what he describes as the "dumb deal" to accept 1250 refugees from Australia's detention centres on Nauru and Manus Islands.

Australia should act to avoid such a scenario. Parliament should pass a law requiring that it debate any proposal to commit Australian troops. A decision by the Prime Minister to go to war should also be subject to a veto by a majority vote of both houses of the federal Parliament. This would provide a much-needed circuit breaker, thereby reducing the possibility of Australia taking part in another inadvisable foreign conflict.

What say do our elected representatives have in going to war?