Reducing tariffs and quotas is one thing, but modern trade pacts often include coercive investor provisions that fly in the face of the notion of fairness and the worker’s right for a fair go, writes Tim Harcourt. 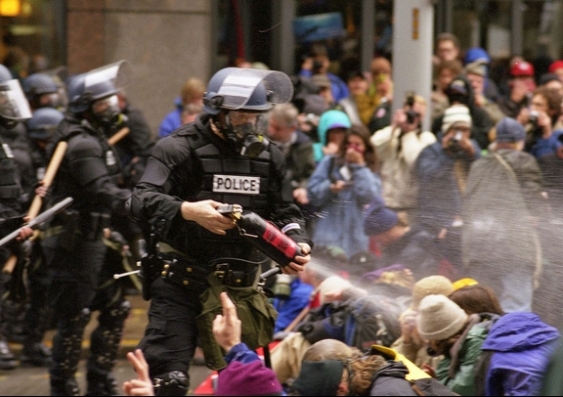 The 1999 ‘Battle in Seattle’ was at the height of the anti-free trade movement. Steve Kaiser/Flickr, CC BY-SA

OPINION: Australia’s Trade Minister Andrew Robb is regularly lauded as one of the most effective performers in the federal government for finalising his “trifecta” of free trade agreements with South Korea, Japan and China – three of our fourth biggest trading partners. And this week Prime Minister Tony Abbott has been out selling an upcoming review to Australia’s existing free trade agreement with Singapore.

But while the political benefits of FTAs are generally accepted by Australians, they remain less convinced of the economic gains. And for some, FTAs are as popular as a German banker at a Greek wedding. Activists, from the left and right, have strongly opposed FTAs. Multilateral pacts like the controversial Trans Pacific Partnership (TPP) have fared even worse.

Given how hard our trade negotiators at DFAT work in marathon sessions to get ministers to headline-inducing signing ceremonies, they’d have to ask are their unsung efforts really worth it?

First, the good news. Exporters, on average support FTAs. According to the DHL Export Barometer of 600 exporters in 2014, 35% of exporters thought the FTA with Japan would benefit their business (60% neutral), 36% with Korea and a whopping 60% with China.

In the case of Japan, 59% said it would increase exports, 38% said it would make them start exporting to Japan, and 22% said they would develop a new product or service for the Japanese market. The 2015 results to be released in August show even more successful results for Japan.

Even past FTAs are seen as remaining helpful, 55% said the USA FTA was positive, 47% the CER with New Zealand, 41% AANZFTA with ASEAN, 38% Singapore, 37% Thailand, and 23% Chile. And 80% of the exporters surveyed are also importers so there are gains being made on both sides of the ledger.

Traditional neo-classical (neoliberal) or dry economists prefer unilateral liberalisation where a country takes down its own tariffs regardless of what its trading partners do. But if that’s not on offer, as we do live in a world of “second best”, they prefer multilateralism, as bilateral agreements have the potential to be “trade distortionary” and create what Jagdish Bhagwati calls an overlapping “spaghetti bowl” of agreements.

Left wing populists don’t like free trade agreements and see trade liberalisation as part of the toolkit of neoliberalism alongside privatisation and the winding back of public goods.

Right wing populists don’t like free trade in the same way they don’t like global finance, the UN and especially immigration. Pauline Hanson drove this movement originally in the 1990s and it has many remnants particularly in regional Australia and equivalents overseas like UKIP in Britain and the National Front in France.

Then there are rent seeking business figures who throw in a bit of anti-free trade populism, so people buy their products (sorry, I mean buy Australian), which is more opportunism than based on ideology or any underlying philosophy.

But in practice, most exporters and politicians are usually “trade pragmatists” and just do any deal they can to get things moving. After all, the WTO is as dead as a Doha, so bilateral FTAs are probably the only game in town, given that it is all quiet on the multilateral front. And bilateral deals are easier to sell on talkback radio than obscure concepts like the WTO, the GATT, or “multilateral trade liberalisation” (see it just rolls of the tongue doesn’t it!).

But there are some aspects to free trade agreements that have raised concerns of a different kind. This has been highlighted by the controversial TPP and the much maligned Multilateral Agreement on Investment (MAI) that died a quiet death after the OECD tried to champion it.

The famous Princeton political economist Dani Rodrik in his seminal work “Has globalisation gone too far?” pointed out the “over reach” that free traders made in moving beyond the simple elimination of tariffs and quotas. Rodrik wrote his book at the time of the anti-globalisation protests at the WTO in Seattle. The “Battle in Seattle” was at the height of the MAI debate. At the same time the Europeans started to question the expansion of the EU which started as a simple project to reduce trade barriers, but then expanded to include a common currency and monetary union (and we all know how that has turned out).

Reducing tariffs and quotas is one thing, but now trade pacts include investor provisions that potentially allow companies to sue governments over public health policies like plain packaging of tobacco, or hinder the pharmaceutical benefit scheme or even labour market benefits (some US employers claimed public provision of health care in Canada was a trade barrier as the US has employer based health care).

In the current debate, some have asked why labour market provisions are really necessary in trade agreements because as Rodrik shows, open economies tend to provide social insurance and labour market institutions that protect workers (but not trade) and build a stronger constituency for free trade. My own research shows that, overall, trade is good for workers as exporters pay, on average, 60% higher wages, offer more education and training, better occupational health and safety and more job security and equal employment opportunity, than non-exporters.

Ultimately getting the balance right between expanded economic opportunity from the open economy and fairness at home will make the FTAs successful. In short it’s about balancing the right for the exporter to have a go, with the worker’s right for a fair go, and ensuring that global output and income can spread throughout the emerging economies and developed world alike.

Know the field when taking a punt on exporting

Opportunities for Australian trade as UK Brexits the EU