When faced with racial abuse from a spectator, Indigenous AFL player Adam Goodes took the opportunity to educate, rather than vilify the girl responsible. It was the mark of a strong leader, writes Chris Styles. 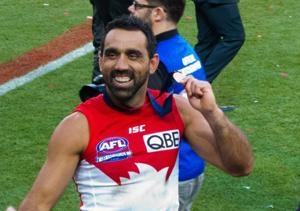 He lifted his shirt in an act that said, 'I'm black and I'm proud'.

It was a line in the sand, a moment that shaped the AFL's approach to Indigenous affairs and had a huge impact on the community generally.

Winmar's message was that Indigenous players should be proud of their contribution to the sport and not accept the abuse they were regularly being subjected to.

This weekend the AFL played its Indigenous Round which celebrates the extraordinary and disproportionate contribution made by Indigenous players to the sport over the years. The game - and Australian society - has come a long way since Winmar's statement and that is something to be noted and celebrated.

But in the opening match on Friday night, as has now been extensively reported, a 13-year-old girl called Adam Goodes - a dual Brownlow medallist (the highest individual honour in the AFL) - an 'ape'.

Goodes is not just a great athlete, he is a proud member - and leader - of the Indigenous community who was having one of the greatest games of his career.

His reaction to the slur was spontaneous, heartfelt, and that of a true leader. How he conducted himself in the following days has further demonstrated his leadership.

When the incident happened, near the end of the game, Goodes' reaction was instantaneous. The Aboriginal high school student who was racially vilified in the playground and just took it, finally stood up.

Goodes identified who was at fault to security guards and made sure she was evicted. The message to his playing peers was clear and by taking this very public stand, he dramatically highlighted that such behaviour is not acceptable and should not be condoned by the community.

He also showed all those non-athletes, especially children experiencing school yard bullying, that there is no place for racism anywhere. By practicing what he preaches, Goodes showed strong leadership.

When he fronted the inevitable media scrum following the event Goodes again highlighted why he is one of the Australia's bravest leaders. He described the situation as 'sad'. Rather than laying blame directly on the teenager, he suggested that she didn't know what she was saying and that she was an innocent teen who didn't realise that her comments were derogatory.

Great leadership means not only standing for something, but being able to articulate that something in a way others can relate to. The overwhelming and positive response to this incident, particularly on social media, says much about Goodes' ability to create a strong narrative around the ideas he stands for. In his press conference he recounted the experience of being bullied in his youth, and painted a picture of how we should be reacting to analogous events in our lives. This was not an angry man who had been wronged, but a leader who used a personal incident to tell a story and provide a path forward for the community.

Importantly, Goodes also followed up on his initial outburst and made sure the incident had a resolution. He didn't throw the young girl to the wolves but encouraged the public, via social media, not to vilify her. He used social media as a tool for educating the public about the issue rather than as a way to score cheap points. There are many others with influence in the public eye who could take note.

Goodes pointed out that the teenager was a victim of the environment in which she had grown up. He wanted the girl to take responsibility for her comments and offered her the opportunity to call him and apologise. He wanted to be able to take time to explain to her what she had done. And while being an unfortunate blight on this important round, he hoped the nasty incident would serve as an important lesson and talking point for the community about the importance of respect for Aboriginal people.

She did apologise. He did explain. And now we're talking.