While AFL fans across the country have been made aware of the Dockers' skill on the oval, few of them would be aware of the club's association with Nelson Mandela's South Africa, writes Tim Harcourt. 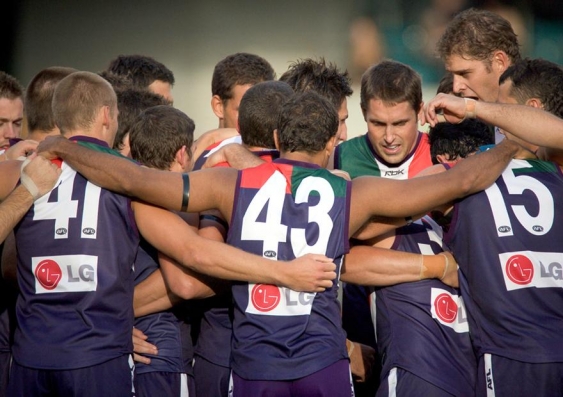 OPINION: The Fremantle Dockers after years of battling in the AFL have finally made their first Grand Final. After playing an extraordinary high pressure style of football, they got over the reigning 2012 premiers the Sydney Swans and now have the right to play hot favourite Hawthorn.

Coach Ross Lyon has taught Freo how to play a tough blue-collar brand of high pressure football which - together with some amazing skill from the likes of Pavlich, Boundy and Fyfe - has moulded the Dockers into a lethal combination. The late and great Freo fanatic and gifted journalist Matt Price would be smiling in heaven right now.

However, there's another side of the Fremantle Dockers that's not so well known. Fremantle has strong business and development ties to Nelson Mandela's South Africa. I found this out quite by accident in 2008 at the mining conference Mining Indaba in South Africa, which is the show piece of mining exploration, equipment and technology in Africa.

Whilst I was at Mining Indaba 2008, I met an unusual participant. He was a sports executive rather than a mining magnate, and he was meeting the most important people in the resources sector in both Australia and Africa at the specially appointed 'Australia lounge' at the event. He was pretty happy as he had just managed to raise $250,000 in sponsorship for his club from a number of South African companies, including the major South African partner, Nkwe Platinum.

His name was Darren Beazley; he'd been a dot com executive and was working at the time as general manager of strategic partnerships for the Fremantle Dockers Football Club after stints with the Western Australian Cricket Association (WACA) in Perth and the AFL in Tasmania. He was also a pretty handy footballer himself with Swan Districts in the WA state competition and is a third cousin of Kim Beazley. (While the Beazleys are known as a famous Western Australian political dynasty, there are sporting ties as well. Kim Beazley's mother Betty was an athletics coach who trained the famous Western Australian runner and Olympic medallist Shirley Strickland.)

So why was a Fremantle Docker executive all that way across the Indian Ocean in South Africa? According to Darren Beazley it was partly about player development and partly about commercial sponsorship. In terms of sponsorship, the AFL clubs know they have a limited pool of dollars to attract in Australia, even in mineral-rich WA, and therefore they have to look for new frontiers. As Beazley puts it:

The sponsorship pie is only so big, so we've got to find another pie. That's why we are involved with NKWE and looking to get involved further in the South African resources sector.

On the field too, South Africa is also proving to be a new frontier for AFL player talent. The game is expanding rapidly in North West of Pretoria which serves as the Dockers' development zone. South Africa is considered to be a promising area for the AFL with regular visits from the AFL as well as GWS Giants coach Kevin Sheedy and Indigenous icon of the game Michael Long, all of whom have regularly visited South Africa.

The AFL has also run a successful Auskick program in South Africa (know as footyWILD) that has helped health and development in the townships (reducing smoking rates). Australian entrepreneur Andrew Douglas, who runs the Cape Town-based Salamander group has helped drive the footyWILD program along with Corporate Social Responsibility (CSR) programs for corporates in South Africa, Australia and India. He sees Africa as "full of untapped opportunities, with plenty of growth for social entrepreneurs as well as traditional resource companies".

Indeed, at the (now annual) Mining Indaba conference - a 10,000-plus strong gathering of global mining interests - it does feel like an extension of extension of WA's mining interests and there are plenty of Perth residents at the conference consisting of former South Africans and the home grown variety. The Australian delegation at Mining Indaba seems to read like a who's who of Perth and on the other of side of the Indian Ocean, Perth is a mini-Johannesburg as well, with lots of South Africans who have settled in the West.

There were fears that after the heady days of the anti-apartheid struggle, that Australia would forget South Africa. Even Tansey Coetzee, a former Miss South Africa, said to me in 2008 that her main aim was to make sure the world "didn't forget South Africa now that apartheid is a distant memory".

However, it looks like that there's no danger in that occurring as Australia's two-way trade with South Africa was worth over $2.4 billion last year with 2,320 Australian companies exporting to South Africa in 2011-12. Whilst the big miners provide the lion's share, there are plenty of Australian services exporters in Africa who do a lot on the training and technology side. Companies like Mincom, Micromine and Ghekko were big players at Indaba and Australia's expertise in technology, training and logistics spills over to a number of sectors. South African agriculture, manufacturing and education (particularly the TAFE sector) industries to are also expected be a big attracters of Australian technology, investment and know-how in years to come.

There was also a big Australian presence in Pretoria too at Centurion Park as the Fremantle Dockers played Carlton as part of Mining Indaba in 2008 as part of the Dockers' ongoing commitment to the townships in South Africa. While there weren't quite cries of "Freo Nelson Mandela" at the game, the Dockers did win and clearly made a bit of progress on both the development and on the commercial side in the Rainbow nation.

While thinking of Africa and development, we think of big concerts run by Bono and Bob Geldof. But maybe something a little bit more low key but equally hard working and effective - like what the Fremantle Dockers are doing in South Africa - could be the way to go.

So whether helping the townships of South Africa or beating Hawthorn, the Fremantle Dockers certainly have a huge task ahead of them.

Tim Harcourt is the J.W. Neville Fellow in Economics at UNSW.