Opinion Soccernomics: the true cost of the World Cup

If Brazil can successfully host the World Cup, its rewards in the stock market, international trade, tourism and global politics will outweigh the huge costs of running the event, writes Tim Harcourt. 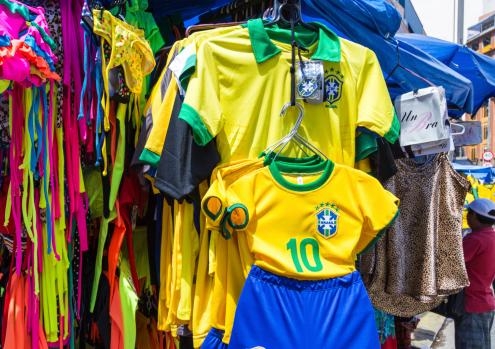 OPINION: We are just a few days away from the long awaited FIFA World Cup in Brazil - the most watched sporting event in the world.

Like the Olympics it happens every four years since it began in 1930 and this time the event has been controversial because of protests against the hosting of the World Cup (and Rio Olympics in 2016) by local Brazilians and most recently by suggestions of corruption in FIFA's decision to hand the 2022 World Cup to Qatar.

As usual, most economists are soccer fans (soccer is known as football in most countries but soccer in North America, Australia, New Zealand and South Africa) and have been analysing the economic impact of the Cup, especially as they have to justify watching the games on TV over the next four weeks or so at the same time as they are analysing shares and commodity prices.

But they needn't be too sheepish about it, as sport is a big deal in economic terms and the business of the World Cup has become one of the most scrutinised set of international transactions you'll ever see (or not see). And while they call economics the dismal science, no one ever said you shouldn't study an industry like sport (or art, music and entertainment) just because it is pleasurable.

After all soccer, football or "the beautiful game" transcends cultures and national borders, has been the subject of economic diplomacy and the odd dispute, and touches millions of people on this planet, for better or for worse.

As the Washington-based journalist Franklin Foer explains in his seminal work "How Soccer explains the world" soccer as "the world game" can be used to explore the Jewish question, hooliganism, Islam, oligarchs, the American culture wars and many more topics loosely based around globalisation.

A-Z guide to the World Cup

Sure, he hasn't mentioned how soccer can explain the fiscal cliff, the budget emergency or global warming but give the guy some time and I am sure he will in his sequel.

But while not being as ambitious as Foer's treatise we can ask some basic questions on the economics of soccer.

First, it is clearly a big deal for Brazil to host the World Cup again, for the first time since 1950, to much fanfare and riots, but is there a World Cup effect? Is it good for the host country economy? Why is Brazil taking it on, and then the Olympics in Rio in a unique double header? What will the hosting of the World Cup do for Brazil's global standing?

There's no doubt that Brazil went for the hosting rights because of the prestige it would bring and would help their claim to be the world's next economic superpower. After all they are the world's fifth largest economy by population and the seventh (on a purchasing power parity - or ppp - basis) or sixth (on a US dollar basis) largest country in the world, accounting for between 3 to 3.5 per cent of world output.

As a member of the BRICSA grouping (Brazil, Russia, India, China and South Africa), Brazil is playing an important role in international affairs as we have seen in the World Trade Organisation and G20 multilateral fora.

Brazil has undertaken a charm offensive in the developing world under the "South-South banner". Under President Luiz Inacio "Lula" da Silva, Brazil opened up 53 new embassies, including 30 in Africa, and has expanded its sphere of influence across the globe. The diplomatic initiatives have continued under President Dilma Rousseff.

And the World Cup is a big deal. According to Goldman Sachs, 250 million people play soccer-football regularly in more than 200 countries and since the first FIFA World Cup was hosted in Uruguay in 1930, more than 70 countries have participated in various qualifying rounds. But as the protestors point out, if resources are allocated away from health and education to build stadia, or if God forbid, something went wrong, it could damage Brazil's prestige just two years ahead of the Rio Olympics in 2016.

Brazil had the reputation of being "the country of the future, and always will be", and the successful hosting of the World Cup in 2014 and Olympics in 2016 would do much to bury that (perhaps unfair) perception.

Second, if there is an economic gain from hosting the world cup, how about winning it? Remember, in 1950, almost 200,000 people packed the newly built Maracana stadium in Rio de Janeiro, and Brazil just needed to draw to win the Cup. But they lost, to their neighbour Uruguay on a day that shocked the nation, and ruined the life of the poor Brazilian goalkeeper who happened to be custodian of the national team on that day.

According to Goldman Sachs, a World Cup win does give a country a boost on the stock market. All the winners since 1974 have outperformed in the post-final month with the exception of Brazil in 2002, which had been going through a financial crisis as was near neighbour Argentina (see my blog "Don't buy from me, Argentina").

The victor outperforms the global market by 3.5 per cent in the first month, then it tails off, and for the host nation outperformance is 2.7 per cent but it tails off too, and can even underperform in three months.

Apart from the stock market, the economic impacts can be positive if the host nation uses the major event to bring forward much-needed infrastructure (as in the Sydney Olympics in 2000), provides a legacy to a local area (East London in 2012 via Westfield Stratford and so on) or to showcase its global engagement to the world (Seoul as Olympic host in 1988 signalled its transformation from closed "hermit" economy to advanced North-East Asian global hub of trade and commerce).

In addition, there are networking effects of hosting the games or the Cup. Austrade's famous "Business Club Australia" model allowed exporting small and medium sized enterprises to get recognition and access to business partners and investors at the Sydney Olympics in 2000 and beyond.

A famous example is "rock star" architect John Bilman, of PTW architects, who built the watercube at Beijing in 2008 as a result of contacts made at Sydney 2000.

Third, what will the World Cup do for Brazilian-Australian relations?

As we found in our book "Great Southern Lands - building ties between Australia and Brazil", we've neglected Brazil for some time, as Australia looked to London while Brazil looked to Lisbon historically. But now as Brazil has had better economic progress than the lost decades of the 1970s and 1980s, and has plenty of economic suitors, Australia will need to do more than just woo the Girl from Ipanema if it wants to succeed in Brazil.

Will the World Cup help with many Australians going to Brazil for the first time to support the Socceroos? One interesting fact from the Goldman Sachs report was that among foreign buyers of World Cup tickets, Australians bought 41,000 tickets, making it second only to the US (154,000), and ahead of football mad England (38,000) and nearby Colombia (33,000).

Whether it is the strength of the Aussie dollar or the enthusiasm of Brazilian-based Australians like Shannon Powell of the Global Foundation, who has been holding fabulous functions for the Socceroos, that's an open question.

It could be that the majority of Australians saw the World Cup as the perfect reason for a once-in-a-lifetime extended holiday to Brazil. Even the famous committed unionist, the ASU's Sally McManus is taking a break from her famous industrial and political campaigns to take a holiday in Brazil. It turns out she's a soccer tragic as well as a committed labour activist.

Fourth, how will the World Cup impact on Australia's trade and investment ties with the rest of Latin America? Chile, Peru, Colombia, Argentina etc.? As I found in the just released publication, "Latin lessons - Australia and Latin America face the Asia Pacific Century", the Andean countries of Chile, Peru and Colombia have been happy hunting grounds for Australian exporters and investors, particularly in resources, energy and education. The World Cup may draw in a bit of extra business, especially as Qantas flies to South America through Santiago, but I expect that business will go on whatever happens in Brazil this month.

And finally what will the World Cup mean for the business of sport in Australia? As I have been finding in researching my forthcoming book, "Footynomics", on the battle of the football codes in Australia, there has been a time when the AFL, NRL and Australian Rugby Union officials were sort of hoping for the Socceroos not to qualify for the World Cup, because it would awaken "the sleeping giant" and they'd lose their talent - on and off the field - to Australia's fledgling soccer code. Now given that Australia has made the World Cup three times in a row, Germany in 2006, South Africa in 2010 and now Brazil in 2014, will they be hoping for a quick exit for the Socceroos?

I think we would expect the rival football codes to want the Socceroos to do well at least out of national pride and professional respect. The big question is whether the latest scandal rocking FIFA in handing the 2022 World Cup to Qatar, with accusations of bribes and breaches of occupational health and safety and actual workplace deaths, might shake things up and bring Australia back into the picture as an alternative host.

Then we would see a battle of the football codes but following a successful Australia 2022, not Brazil 2014.

Tim Harcourt is the JW Nevile Fellow in Economics at UNSW.

What’s in a game? Why sports economics is a big deal.

In defence of the 'dismal science'