Opinion Why more money is not to blame for rising inequality

If a treasurer or a billionaire blames quantitative easing for rising inequality and argues the best solution is to lower taxes, I recommend a little scepticism, writes James Morley. 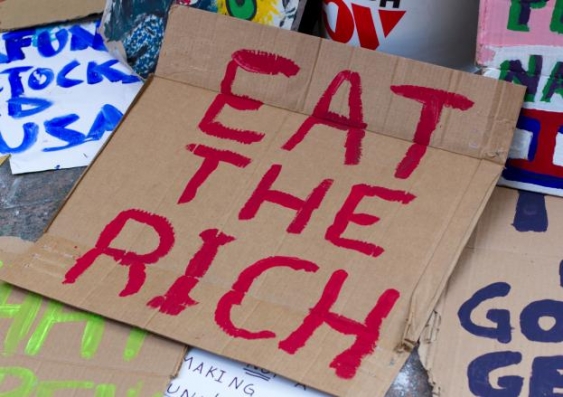 OPINION: Treasurer Joe Hockey and billionaire Rupert Murdoch recently made impassioned speeches expressing their deep concern about the problem of rising inequality – the rich are getting richer, while the poor are suffering from stagnant or even declining real wages.

I’ll admit I was surprised when I heard about these speeches. For some reason, I had a preconceived notion that Ayn Rand’s Atlas Shrugged would have a more prominent placement on Hockey and Murdoch’s bookshelves than Thomas Piketty’s “Capital”.

Some semblance of order was returned to the universe when I later read that Hockey and Murdoch were arguing that lower taxes and smaller government are the best ways to address inequality. Ayn Rand could still be proud of these highly talented and successful individuals, despite their heartfelt and possibly religious-motivated concern for the poor.

Is quantitative easing the culprit?

However, Hockey and Murdoch did not just provide a predictable ideological policy solution to this rising inequality. They went out of their way to articulate a new and genuinely surprising economic theory as to why inequality has been increasing in the first place.

According to their theory, rising inequality is driven by the quantitative easing (QE) programs undertaken by the Federal Reserve (the Fed) in the United States and some other central banks after the global financial crisis (GFC). Hockey and Murdoch believe the expansion of money supply associated with QE resulted in inflated asset and real estate prices, making the rich richer and leaving the poor behind.

This might sound plausible on the face of it and, if true, it is certainly a good thing the Fed just announced the end of QE. However it is unlikely that inequality will suddenly start to decline because this theory doesn’t hold water.

QE has actually mitigated rising inequality, rather than caused it, because QE prevented deflation. Deflation is an ongoing decline in prices and wages which occurred in the Great Depression in the 1930s and Japan in the 1990s.

Basically, no one likes deflation, except for those lucky few people with no debt and lots of assets. The rest of us with some of both and even those with neither would have been much worse off had the GFC led the world into what macroeconomists call a “debt-deflation spiral”.

To understand this grim-sounding descent into macroeconomic hell, let’s say I borrowed $10,000 from Rupert Murdoch just before the crisis to help me buy a house. I would still owe him $10,000 afterwards, but if the crisis had led to deflation, my wages, assets and the value of the house would have fallen. So it would be much harder for me to pay back the $10,000 even if I liquidated my assets by selling my house. I would have to cut back on my spending and save more to bring my real debt burden back under control. Meanwhile, if everyone (except Rupert Murdoch) tried to deleverage in this way at the same time, it would result in a deeper economic depression. Overall there would be more deflation, more unemployment, and a larger increase in the real burden of debt.

This debt-deflation spiral is a pretty good description of what happened in the Great Depression and, to a much lesser extent, Japan in the 1990s. Fortunately, the former Fed chairman Ben Bernanke and other central bankers facing the GFC applied lessons from the past. They didn’t tailor their policies exclusively to the needs of debt-free lenders who just want a high real return on their assets and so don’t mind deflation.

Instead, during the GFC, Bernanke and others undertook QE to stabilise inflation expectations. By avoiding deflation, QE prevented borrowers from getting poorer and lenders getting richer.

To be clear, monetary policy can have large distributional effects, but only when it leads to unanticipated deflation or inflation. For example, high inflation in the 1970s was a surprise and resulted in huge benefits for the baby boomers who borrowed to buy houses before the worst of the inflation hit. They still owed the amount borrowed, but their wages and the nominal value of their houses went up considerably with inflation. For example, the median house price in Melbourne went up from A$12,800 in 1970 to A$39,500 in 1980 - a 200% increase over the decade, meaning the real burden of debt declined dramatically over the period. This was just the reverse of the debt-deflation spiral in the 1930s, a spiral avoided during the GFC due to the QE policies implemented.

If QE and monetary policy didn’t cause rising inequality, what did then?

Technology has shifted the nature of work dramatically over the past century from farms to factories to office buildings. It has also increased the returns to certain specialised skills and cognitive ability. This technological change has greatly improved standards of living. However it has left many people who do not have higher-education degrees with stagnant real wages or long-term unemployment. As a result, inequality has increased.

This skill-biased technological change has been going on for a while, as has the resulting rise in inequality. Ben Bernanke highlighted its role in driving inequality in a speech back in 2007. By contrast, QE has only been on the scene for the past five years or so (not counting the Bank of Japan’s sporadic and generally limited forays into such policies since 2001), further undermining its potential to explain rising inequality.

But if rising inequality is due to skill-biased technological change rather than QE, what can be done?

Improving access to higher education seems like an obvious answer. But this is far from a panacea, especially to the extent that higher education serves more as a signal of high cognitive ability than it actually develops skills. We could give everyone in the world a PhD, but there would still be a lot of inequality.

Instead, fiscal policy, rather than monetary policy, can reduce inequality via progressive taxes. Current Fed chairwoman Janet Yellen said as much in a recent speech on inequality, targeting inheritance in particular as a source of persistent gaps in economic opportunities for the rich and poor.

Joe Hockey may try and advocate that higher taxes kill the goose that lays the golden egg. Yet there is surprisingly little evidence of this, at least not at the level of taxes currently in place in most advanced economies. Countries with higher and more progressive tax rates have less inequality, but still grow just as fast or faster than countries with lower taxes and more inequality.

For example, despite higher taxes, Australia, Canada, and Sweden have all grown faster than the United States over the past two decades.

So next time a Treasurer, a billionaire or anyone else tries to argue that QE is responsible for rising inequality and the best solution is lower taxes, I recommend being more than a little sceptical.

James Morley is Professor of Economics and Associate Dean (Research) at UNSW.