Computing with a single atom

A research team led by Australian engineers has created the first working quantum bit based on a single atom in silicon, opening the way to ultra-powerful quantum computers of the future. Their work was published online by Nature on Thursday 20 September. 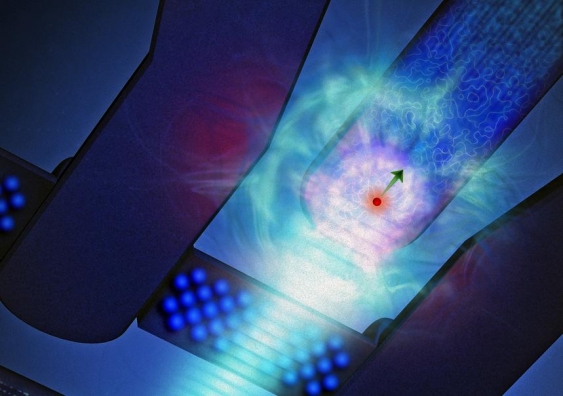 Quantum vision: Computing with a single electron in silicon

Timeline of the development of silicon quantum computing in Australia
1994: Peter Shor from Bell Labs (USA) shows that a quantum computer would be able to decrypt Public Key Encrypted codes (at the heart of modern secure communications) exponentially faster than today’s supercomputers. This triggers massive interest in quantum computing worldwide.
1994-1998: Various schemes proposed for making a quantum computer using different systems including photons, ion traps, superconductors, semiconductor quantum dots.
1998: Dr Bruce Kane, then a postdoctoral researcher at UNSW (now a researcher at the US Laboratory for Physical Sciences in Maryland), publishes a paper in Nature [Nature 393: p 133 (1998)] outlining the concept for a silicon-based quantum computer, in which the qubits are defined by single phosphorus atoms in an otherwise ultra-pure silicon chip.
The quantum information is encoded in either the spin of the electron or the spin of the P nucleus. This is the first such scheme in silicon – the material used for all modern day microprocessors.
Kane’s paper attracts great interest because: (i) Silicon is “industrially relevant”; (ii) Silicon electron “spins” have very long “coherence times” (hence, low error rates). This paper has now generated over 2000 citations.
Despite the great potential for a silicon quantum computer, the task of building devices at the single atom level is considered almost science fiction back in 1998.
2000: Prof Bob Clark establishes the ARC Special Research Centre for Quantum Computer Technology, headquartered at UNSW, to attempt to build a quantum computer.
The Centre has now expanded to become an ARC Centre of Excellence – with more than 150 researchers in Australia, and major collaborations world-wide.
The Centre now generates about 100 research publications a year.
Bob Clark retired from CQCT in 2008 to take up the role of Australian Chief Defence Scientist from 2008-2011. He now researches energy policy at UNSW.
Prof Andrew Dzurak (UNSW) and Prof David Jamieson (University of Melbourne) were founding chief investigators in CQCT and were charged with using ion implantation to build a silicon quantum computer.
Ion implantation is a technology for injecting “dopant” atoms (such as phosphorus) into modern silicon integrated circuits. As a “mass production” technology ion implantation is very attractive if we are ever to build a commercially viable large-scale silicon quantum computer processor chip.
2000-2009: Various researchers at CQCT contribute to ground-breaking single atom nanotechnologies – generating hundreds of papers.
Two main approaches:

Despite the amazing progress in single atom nanotechnologies over the past decade, until now there has been no demonstration of a single electron spin quantum bit based on phosphorus donors, as first envisaged by Kane back in 1998.

Timeline for the ion-implanted (“top-down”) single-atom quantum bit
2006: Dr Andrea Morello joins the team at UNSW, in the quest to build silicon qubits using the “top-down” approach. Morello brings a background in quantum spin physics, which is essential to the team.
Morello and Dzurak form a close partnership – aimed at realising the dream of a silicon quantum bit.
2008: The “Top-Down” team at UNSW conceives a new scheme to read out the spin of an electron on an implanted phosphorus donor.
Paper published in Physical Review B in 2009 [A. Morello et al., Phys. Rev. B 80, 081307 (2009)].
2009: Morello and Dzurak, and their experimental teams, see the first experimental evidence of the read out of the electron spin on a phosphorus atom in a qubit device.
2010: Paper published in Nature, describing the “Single shot readout of an electron spin in silicon” – the step of measuring a silicon qubit. [A. Morello et al., Nature 467: p687 (2010)]
2012: Paper published in Nature, describing “A single-atom electron spin qubit in silicon” – the final crucial step of writing information on an electron, to fully operate a silicon qubit. [J. Pla et al., Nature (2012) in press]

Key research team members and their roles in the paper

1. Centre of Excellence for Quantum Computation and Computer Technology (CQC2T): Australian centre of research excellence, headquartered at UNSW, in which Dr Morello and Prof Dzurak are project leaders. Founded in January 2000.

3. Australian Research Council (ARC): Major funder of CQC2T via the ARC Centres of Excellence Scheme (a funder since 2000).

4. US Army Research Office: Funder of the Silicon Quantum Computer Program at UNSW and the University of Melbourne since 1999.

6. NSW Government – Department of Trade & Investment, Office of Scientific Research: Provides significant co-funding to CQC2T (since 2003) and also to ANFF (since 2006). 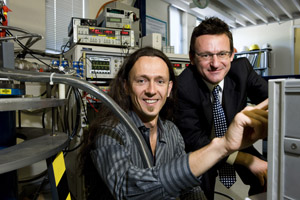 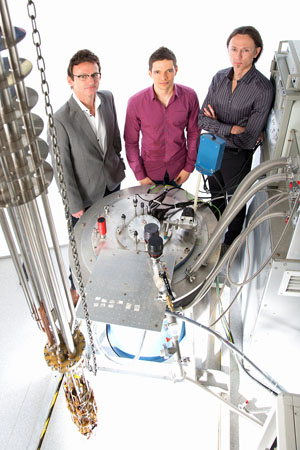 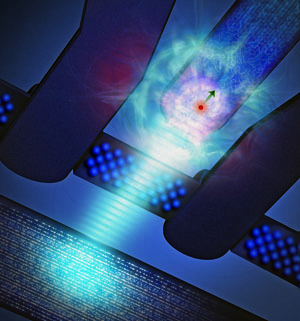 Artist’s impression of a phosphorus atom (red sphere surrounded by electron “cloud”, with arrow showing the spin direction) coupled to a silicon single-electron transistor. A burst of microwave radiation (light blue) is used to ‘write’ information on the electron spin. Credit: Tony Melov 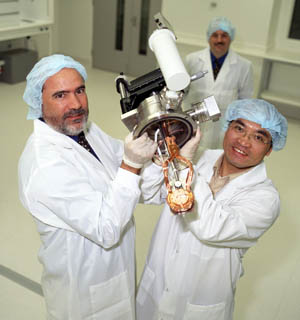 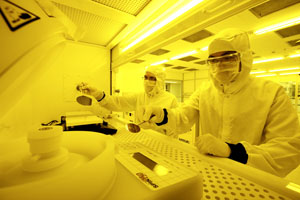 Why uncertainty makes us change our behaviour (even when we shouldn't)