A world-first interactive replica of Sydney’s CBD created with commercial gaming technology is providing a prototype for international urban planning and security. 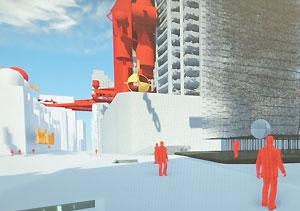 A world-first interactive replica of Sydney’s CBD created with commercial gaming technology is providing a prototype for international urban planning and security.

The virtual representation of Sydney, which updates automatically in real-time, has the potential to provide urban-planners, developers and architects with previously inaccessible security and spatial data critical to Sydney’s emergency response planning.

Professor Goodwin said the technology will provide an invaluable central database for the mapping of Sydney. The researchers aim to make the interface open-access with privacy settings that can be switched on and off according to the user.

“Patterns of use, mobility, and security have changed rapidly since 9/11 and this has been recognised by civic authorities, dependent industries and academics, globally,” he said.

“Our research pulls together what has been a disparate soup of databases and software into one cohesive program that developers, planners and architects can access easily and inexpensively – this technology had the potential to act as the “brain of the city”.

By modelling the city in the virtual world of the computer game, simulations of explosions, floods, emergencies and varying weather patterns can be modelled and analysed.

Sensor controlled avatars act as residents reacting to emergency scenarios. Their responses are then closely monitored, advancing the capability to map, test and analyse pedestrian movement in Sydney and other cities globally.

“To date no one has attempted to map the movement of people in cities using gaming technology,” Mr Lowe said. “Our software offers far more comprehensive data than existing tracking devices, including CCTV or GPS.”

Professor Goodwin said improving the efficiency of existing buildings is crucial for growth in the world’s cities.

“This technology will significantly improve Sydney’s capacity to develop, through the enhancements it can provide to the design of existing buildings and by changing the way we think about useable spaces - particularly safe spaces and security,” he said.

Mr Lowe said the future of interrogating all information is in 3D, and in real time.

“It’s no longer enough to look at graphs and spread sheets and count pedestrians. Future approaches to planning and security are about being immersed in different points of view.”

The interface and architectural model of Sydney’s CBD will be exhibited as the centrepiece of Beijing Design Week in September.

How does a city get to be 'smart'? This is how Tel Aviv did it