Journalist Stan Grant has called for a national truth and reconciliation commission, “a full reckoning of our nation’s past”. 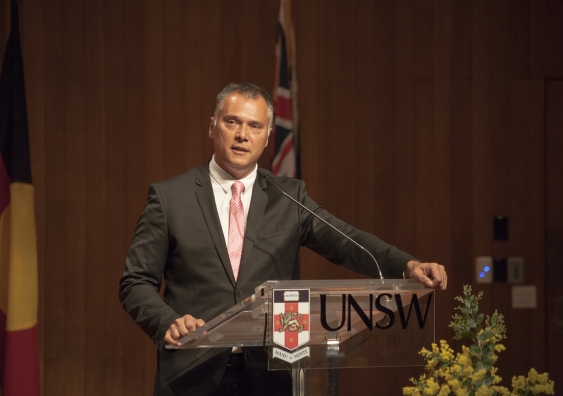 In the wake of the damning ABC Four Corners report on the incarceration of Indigenous children in the Northern Territory, journalist and “proud Wiradjuri man” Stan Grant has called for a national truth and reconciliation commission, “a full reckoning of our Nation’s past that may set loose the chains of history that bind this country’s first and today most miserably impoverished people”.

He also called for a treaty with Indigenous Australians that would be similar to those in New Zealand, the United States and Canada.

Delivering the UNSW Wallace Wurth Lecture, Grant asked: “How can I stand here and speak to the idea of our place in an indissoluble Commonwealth when this week my people have been reminded that our place is so often behind this nation’s bars?”

Before the lecture, titled From Reconciliation to Rights: Shaping a Bigger Australia, Grant was awarded the honorary degree of Doctor of Letters by UNSW Chancellor David Gonski, in recognition of his services  to the community.

Grant told a packed Clancy Auditorium he had intended to deliver a more careful speech, seeking less to inflame  and more to comfort, but watching the Four Corners report had left him struggling to contain a “pulsating  rage”. After “seeing images of a boy in a hood strapped  to a chair, Aboriginal boys tear gassed, locked down and beaten”, he had rewritten his speech with his clenched fists hovering over the keyboard.

The University has announced that it will appoint a Pro-Vice-Chancellor Indigenous.

The speech Stan Grant wanted to give

“I would have appealed to the best of Australia …”

There was a speech I had planned to give tonight. I wished it to be a speech rational and measured. In this speech I would have appealed to the best of Australia – to what Abraham Lincoln would have called the better angels of our nature.

In this speech I would have wished to locate Indigenous people within the framework of the grand tradition of liberal Western democracy.

In this speech I would have spoken of Hegel’s idea of man “not being at home in the world”.

I would have asked how we – the first peoples of this land – could be at home in a world imposed upon us.

In this speech I could have touched on those thinkers who are the pillars of Western democratic ideas – I would have told of wrestling with John Locke and J.S. Mill.

How they have inspired me, yet left me reeling from their implicit harsh judgement of the society and culture that I am drawn from.

I would have told of feeling both drawn to the steadfastness and stoicism of conservatism yet wondering how so many of those who lay claim to the mantle “conservative” today can be so mean spirited and have a deficit of generosity.

I cannot give that speech; it is best saved for another day. That speech would have come from my head but I wish to speak from my heart. Some of my own people have criticised me for being too faithful to diplomacy. They find fault in my hope or optimism. To my critics, I give Australia too much credit.

In another week I might challenge them – but not this week.

This week they are right. This week I have struggled to contain a pulsating rage.

For full speech go to newsroom.unsw.edu.au