Former Australian of the Year Adam Goodes has been awarded an honorary Doctor of Letters for his dedication to reconciliation and distinguished service to the community. 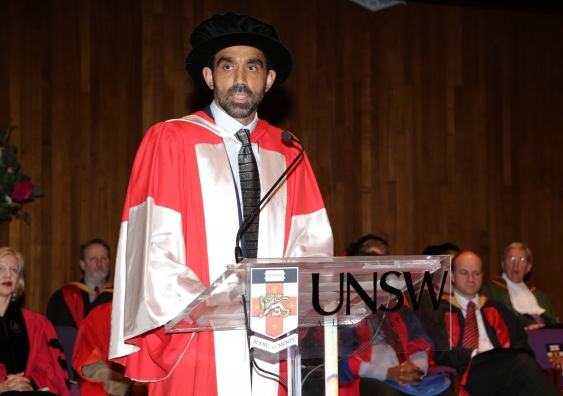 A man of letters ... Adam Goodes receives his Honorary Doctorate

Former Australian of the Year, AFL player Adam Goodes, has been awarded an honorary Doctor of Letters, the University’s highest honour, for his “dedication to reconciliation and his distinguished service to the community”.

The Sydney Swans utility player’s career highlights include two Brownlow Medals and more than 350 games with the Swans.

Noting Goodes’ “exceptional sporting achievements”, the citation for his Doctor of Letters honoris causa said this was “surpassed by his dedication to eliminating discrimination and to supporting Indigenous Australians”.

In 2009, Goodes established the GO Foundation with his cousin and former teammate Michael O’Loughlin, with the goal of enhancing self-empowerment for Aboriginal and Torres Strait Islander children through quality educational opportunities, scholarships and mentoring. In addition, he has supported the Justice Reinvestment Campaign, which seeks to address the overrepresentation of Aboriginal young people in custody, and the Recognise campaign to have Aboriginal and Torres Strait Islander peoples recognised in the Australian Constitution. 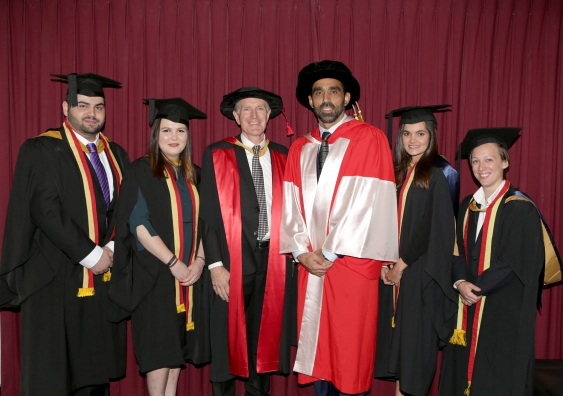 Before the ceremony, Goodes took time to meet with four Indigenous Law students who were graduating at the ceremony, joking about the colours of his gown – the signature red and white of the Swans.

Dean of UNSW Law Professor David Dixon, in reading the citation, said: “One of the founding principles of Adam Goodes’ GO Foundation is that education is the cornerstone of a healthy, happy and productive life, an ideal that is in perfect alignment with the goals of our University.”

In his speech, Goodes spoke about the importance of education and of individuals using their opportunities and potential.

“... your skill and talent is what got you here. But it is your mindset – determination, dedication and discipline – the way in which you handle what gets thrown your way, that will make you stand out,” he told the audience of Law graduates and their family and friends.

He gave advice about what has helped him during his life: thinking about what is right for his team-mates, colleagues, family and friends; making the right decisions and sacrifices for himself and standing up for his values.

Goodes, who was recently the centre of media attention for doing a “war dance” during the Indigenous AFL round, said the uproar surrounding that event had taught him his most recent lesson: “…the right thing is to make sure that if you’re ever going to do some sort of dance, celebration move or war cry, you call and let people know first.”