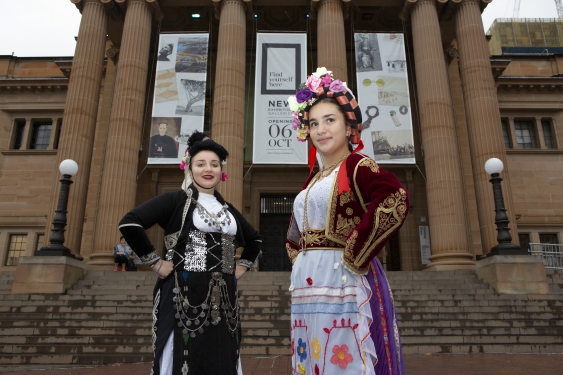 As an historian, Associate Professor Nick Doumanis from UNSW’s School of Humanities and Languages knows how histories can vanish.

“My ancestors lived for hundreds of years in Asia Minor, but they have left very little trace and hence, they are chiefly forgotten,” he says.

Prompted by the fact that the post-1945 generation of Greek migrants in Australia is passing away, and because their stories have not been adequately studied or recorded, the associate professor is leading a project that he hopes will preserve this history.

The Greek Australian Archive, officially launched at the State Library of NSW last week, will provide students, the public and scholars with resources such as photos, oral histories and letters to help them study the history of the Greeks in Australia, specifically in NSW.

The archive is a collaborative project involving the State Library, the Foundation for Hellenic Studies, the Greek community and UNSW, a university favoured by students of Greek background.

“We are in danger of losing too much of our information as the older generation passes away, as the Greek organisations close their doors, and as documents disappear in bins,” Associate Professor Doumanis says.

He is working with UNSW Greek Studies lecturer Dr Efrosini Deligianni and Film Studies Professor George Kouvaros on the archive project, which will also collect original documents and films.

The UNSW team have been meeting elderly Greek migrants to record their stories and have been talking to important Greek organisations about managing their historical materials.

Associate Professor Doumanis says the archives will help the Greek community deal with the heavy burden of preserving their stories and ensure they will be preserved forever.

“A few hundred years from now, people will have evidence that tells them about the difficulties faced by our parents from the Peloponnese, Cyprus and the islands before they came, their struggles to make a new life here, and how they set-up their children for a better life,” he says.

“The photos, the films and all the other evidence will tell us how they lived and the things they valued.”

The project will also cover pre-war migrants such as the Kytherians, the Castellorizians and the Ithacans “who had established community organisations that received the post-war Greeks and help them settle” with employment and small business experience.

“Among the surprises that we have encountered is the fact that so many Greeks actually arrived by plane,” he says.

“Those who came by boat before 1960 tended to travel in ships that were not purpose-built for passengers and they were terrible, while those who came on Greek-owned ships like The Patris had a much better experience.”

The historian doesn’t want the Greeks to be remembered by caricatures such as ‘Con the Fruiterer’.

“I would argue that the history of the Greeks in Australia is about families struggling to find a better life,” he says. “The typical Greek migrant came here with one suitcase to find material prosperity, and typically he or she succeeded.”

He says the Greek community in Australia should be celebrated, as it is “one small chapter in the long history of Greek migration that goes back to the Bronze Age, before Homer”.

“Because the Greeks always migrated, they have always had traditions that helped them organise themselves, form communities and prosper: the Greek community [in Australia] are in the same tradition.”

It’s hoped the project will be accessible in the State Library at the end of 2021.

“We want to interview 200 Greeks overall, half men and half women, from different parts of Greece, Cyprus and other places [for example, Egypt], and both pre-war and post-war Greeks,” Associate Professor Doumanis said.

The project still needs to raise philanthropic support to complete the archives.