Wild Researchers is a unique collaboration between UNSW and award-winning photographer Tamara Dean that transports us outside the lab and into the elements. 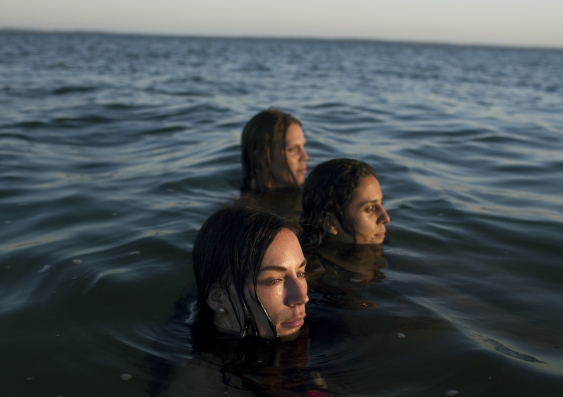 Most of the 17 researchers featured in the striking portraits, currently being exhibited at the Australian Museum, are working in scientific areas – from mathematics and astronomy to climate change and biotechnology – along with a landscape architect and a philosopher.

An initiative of the UNSW Media Office and supported by the Division of Advancement, the exhibition features an essay by journalist and author Ashley Hay – ‘The Fieldwork of Looking and Seeing’. In this edited excerpt, Hay writes about how Dean’s vision casts our subjects in a new “heroic” light, busting stereotypes along the way. 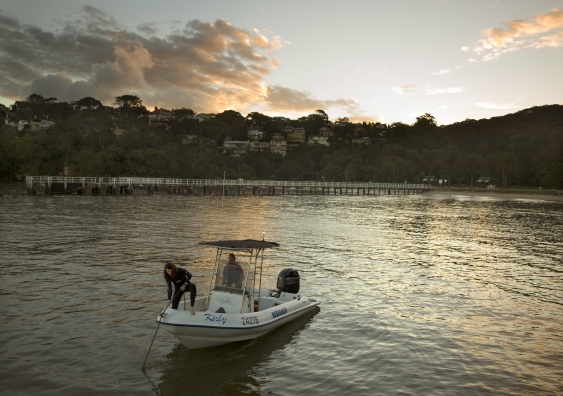 The Fieldwork of Looking and Seeing

Almost 60 years ago, the anthropologist Margaret Mead described a scientist – necessarily male, she felt – as someone who “wears a white coat and works in a laboratory.

He is elderly or middle aged and wears glasses … He may wear a beard, may be … unkempt … He is surrounded by equipment. And most children agree with that shorthand when you ask them to take a “draw-a-scientist-test”.

This is how we understand researchers to look – when we don’t know; when we’re not sure who they are or what they do. But look here: a woman leans down towards the surface of the sea, her reflection reshaped by the grey-glass water. A man stands with a bird on his arm – both man and bird still beyond the freezing of this frame.

“Heroic” is how she describes it. A quest to “represent the ways these people related to landscapes in a way that makes a heroic image of them and the way that they work”.

Here they are, pinned to paper as securely as any Linnaean specimens: a concurrence of researchers. Us looking at them – and them looking at the landscape that contributes to their professional lives. Not a lab coat or a test-tube in sight. And all these people – all the people in this Wild Researchers suite by Tamara Dean – work in the worlds of science and research in fields as diverse as Indigenous astronomy (Duane Hamacher), marine ecology (Adriana Vergés), philosophy (Thom van Dooren) and climate science (Sarah Perkins-Kirkpatrick). 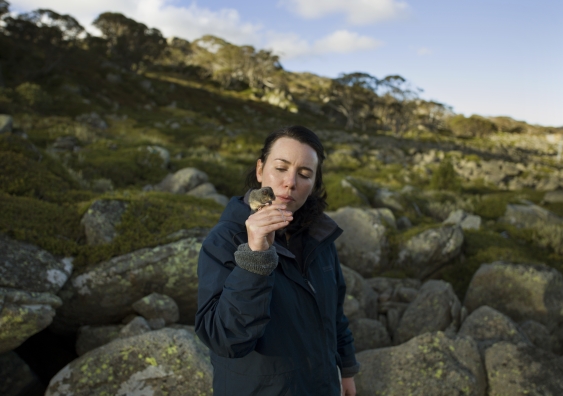 The things they seek to understand through the data their landscapes contain – in Australia and around the world – are intrinsic to their work. They seek the appearance of meteors, supernovae, aurorae and more in Indigenous Australian traditions. The restoration of underwater forests. The ethical impacts of the extinctions and resurgences of various species of crow. The heatwaves of the future. And these landscapes feed both the questions they ask and, often, the means they have of answering them.

For years, Tamara Dean recorded the world for the news, her creative work carefully corralled. As a staff photographer with the Sydney Morning Herald her portfolio ranged from protests to terrorists to disasters to arrests to portraits to tsunamis and more. Immersed entirely in her own artistic practice since 2014, she records the world still – leaning more towards some of its particular places and the ways in which people connect to them, or cherish them, or are inspired by them.

She’s spoken of a sense of “conjuring” something – “finding images in the air and light. Waiting for energetic points to come to a head … holding for breath … pausing for space” in the context of other photographic series she’s created. And there’s a sense of this in her work here too – and of a certain grandeur. There’s something vast in their conception: they evoke the richness of painted canvases, or perhaps something cinematic. The same grandeur imbues their poses and their grace.

“Heroic” is how she describes it. A quest to “represent the ways these people related to landscapes in a way that makes a heroic image of them and the way that they work”. 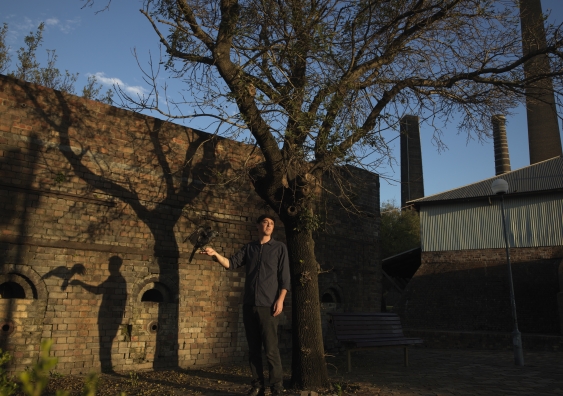 These words are not the usual descriptors of fieldwork – fieldwork is a thing of busyness, of collection, of immersion, of data. Yet fieldwork is a necessarily various thing too. Fieldwork has required Thom van Dooren to dress up as a whooping crane so as to be able to spend time with these critically endangered birds without introducing them or habituating them to humans. He calls the work he does “field philosophy” and finds it very difficult to “think philosophically without a connection to the landscape”.

If I could have any piece of knowledge, I would ask for what these subjects thought about as they sat still – pinned, pressed – while Tamara Dean fixed these richly made images.

If I could have any piece of knowledge, I would ask for what these subjects thought about as they sat still – pinned, pressed – while Tamara Dean fixed these richly made images. I would ask for the train of thought that looped and twisted through those minutes: Hayley Bates remembers hers. To sit and look at the landscape without having to undertake the work that she usually associates with it – “checking traps, catching animals or conducting habitat surveys; focusing on collecting data and making observations” – allowed her to look around and immerse herself in the beauty of the landscape she was in. When she’s not there, she says, she thinks of that place, the Snowy Mountains, with pure awe.

Photographs catch and store something essential: the images themselves and all their different components, and the stories that the photographer – the artist – hopes these frames will transmit. And the loveliest thing? If you can’t see those stories straight up, you can always imagine your own versions. Imagine the stories told to Duane Hamacher by Aboriginal people about the skies above. And imagine standing in that water with those three chilly mathematicians – literally dipped into the information they unravel and expound at their work each day.

Imagination: it’s not the first word usually associated with research – with science itself – but it’s a vital one. Perhaps these images can serve as new shorthand for the richness and necessity of its load. These workers paused and caught in a landscape they help to define.

Wild Researchers is at the Australian Museum until 13 December. The exhibition will be on campus in early 2016. See all the images, video and read Ashley Hay’s full essay at wildresearchers.unsw.edu.au