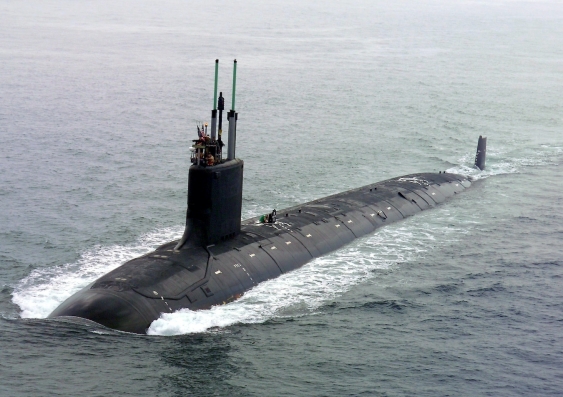 The US Navy nuclear attack submarine Virginia returns to the General Dynamics Electric Boat shipyard in Connecticut after its first sea trials in 2004. Photo: Wikimedia

AUKUS was announced on Thursday and its first initiative is the delivery of nuclear-powered submarines to the Royal Australian Navy.

“This establishes a new inner circle of trust among the 5-Eyes nations, which purposely leaves New Zealand and Canada on the outside looking in,” Vice-Admiral Maddison said.

“The significance of the US decision to share nuclear submarine propulsion technology with Australia cannot be overstated. It places Australia at the front of the queue, alongside the UK, as Washington’s most trusted and respected strategic partner.”

He said there would be many challenges ahead, but also opportunities for further collaboration between the three nations.

UNSW Canberra Emeritus Professor Carl Thayer said the announcement was a reassuring development for regional states who would like to see the US counter-balance China in the Indo-Pacific.

“Now there is concrete evidence the Biden Administration is not withdrawing from the region,” Professor Thayer said.

“The formation of AUKUS will raise tensions with China and will send its propaganda mill into high gear. It remains to be seen if China will apply more economic pressure on Australia and treat the UK in a similar manner.”

“Beijing has been accusing Australia and the US of perpetuating a Cold War mentality, and to them, this is but the latest example,” Dr Yeophantong said.

“To Beijing, the Morrison government has obviously made its ‘choice’ to be a stalwart supporter of a US-led regional order – and opportunities for cooperation look increasingly dim.”

“We need to support regional concerns about Chinese ambitions, while respecting the nuclear weapons-free zone (NWFZ) treaties of ASEAN and the South Pacific,” Professor Burke said.

“When the subs are eventually operational, they will add to the naval deterrent that could help prevent conflict in Northeast Asia. We must respect the NFWZ treaties and dialogue with regional partners about our plan.”

He said assurances that Australia would not arm the submarines with nuclear missiles suggest that there will be no breach of the Treaty on the Non-Proliferation of Nuclear Weapons.

UNSW Canberra historian Associate Professor David Lee said the US has historically shown a reluctance to share its nuclear technology with allies.

“This began with the US Atomic Energy Act of 1946, which prohibited the United States from sharing the atomic secret, even with Britain,” he said.

“The US rebuffed efforts by Australia in the 1960s to obtain nuclear weapons off-the-shelf from its allies and, though its Nuclear Non-Proliferation Treaty of 1968, encouraged allies such as Australia to pledge never to acquire nuclear weapons.

“The new submarines will be nuclear-powered and not carry nuclear weapons, but this is nonetheless a big step for the US and for Australia, which will become the only non-nuclear nation to possess nuclear submarine capabilities.”

Costs for submarines – and climate change

Professor Burke said questions remained around the cost of the submarines.

“The acquisition is likely to be very costly and raises great risk of cost blowouts, at a time when there are multiple demands on the defence budget, not least in regards to climate change and humanitarian and disaster relief demands,” he said.

“COVID-19 and climate change are the greatest current threat to national security, and the Commonwealth has left Australians vulnerable because of its underinvestment.”

However, he said it could be a step towards reducing Australia’s carbon emissions.

“The acquisition could be an opportunity to trigger a serious effort to phase out fossil fuel use across the Australian Defence Force so that Australia can meet the IPCC’s benchmarks for holding global heating at 1.5 degrees this century,” he said.

“Perhaps most important for UNSW in the AUKUS announcement is language around enhanced collaboration in developing defence capabilities in the fields of AI, cyber, hypersonics and others,” Vice-Admiral Maddison said.

He said the alliance could help streamline collaboration between the three countries.

This story was originally published by UNSW Canberra at the Australian Defence Force Academy. Read the original story.