Opinion Australia could have 900,000 more migrants if we no longer let in tourists

Sentiment can skew logic when it comes to using our natural resources, writes Raja Junankar. 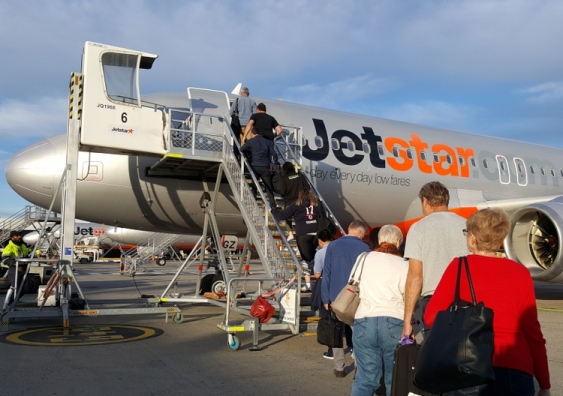 Many who fear Australia’s population boom believe we should be cutting down on immigration. They blame immigration for congestion and expenditure of environmental and other vital resources. They say Australia’s cities are becoming overcrowded and cannot sustain more people.

But if Australia were to cut down on immigration, it would also then make sense to introduce policies that limit numbers of international tourists and students. Why single out one group of people? If any person living in Australia drains a certain amount of resources, it stands to reason this is also the case with short-term visitors arriving year after year.

Not only do tourists and international students add to crowded trains, trams and buses, think of all the environmental resources they consume – such as the water hotels spend on frequently washing their sheets.

Just as with migration, tourist numbers are on the rise in Australia. The number of international tourists (below, blue line) increased from just over 4 million in 1997-98 to nearly 8 million in 2015-2016. Settler arrivals (people living in Australia who are entitled to permanent residence) increased from 81,000 in 1998 to 135,000 in 2016. 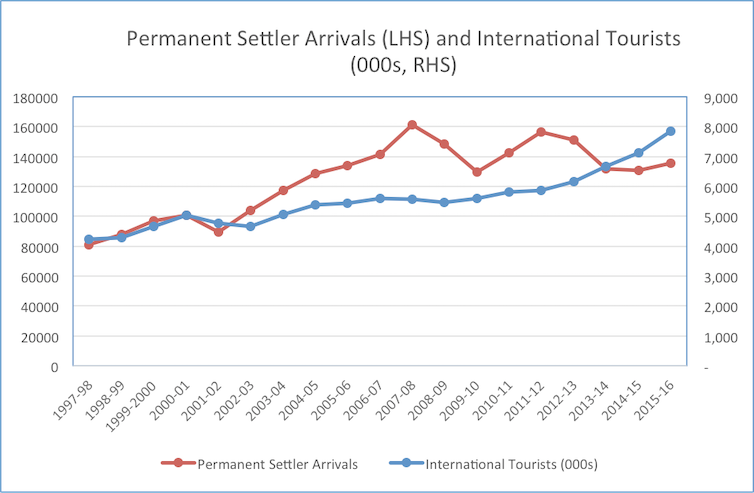 My crude calculations show that if Australia were to allow zero tourism, it could accommodate roughly 900,000 more migrants. As a comparison, Australia’s total migration intake is around 190,000 per year.

But of course curbing tourism, or immigration, isn’t a feasible option. Tourists, international students and migrants all add positive value to Australia.

As a general rule, the monetary amount spent across a group of people in a population is considered a rough approximation of the amount of resources that have been used. So, to get an idea of the resources short-term visitors to Australia (which includes tourists and international students who stay for less than a year) might use, I extracted data on how much they spend on goods and services.

Read more: FactCheck: is Australia's population the 'highest growing in the world'?

Then I calculated the approximate number of migrants who would be spending the same amount of money. This gave me a rough indication of how many extra migrants we could let into the country per drop in tourist numbers.

I was a bit generous in terms of working off the assumption that migrants spend the same amount on goods and services as “native” Australians. I used ABS data for my calculations, which were:

The fact we could have 900,000 extra migrants if we had no tourists is a very rough number. The point is not the exact number. Even if the more accurate number was 400,000, that number is large. The purpose of this exercise is to show that migrants, as one group of people, don’t pose the most significant risk to our population in terms of resources drained. 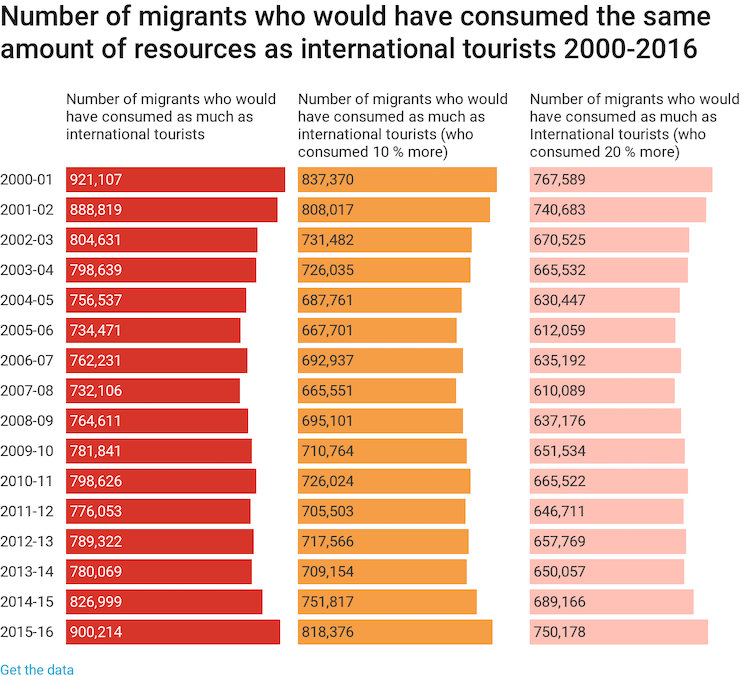 These numbers are based on crude calculations, and assume that migrants spend the same way as Australian-born residents. CC BY-SA

As already mentioned, my calculations were crude. More detailed calculation of resources consumed by both groups (immigrants and international tourists) would compare the different impacts on growth and employment of immigration. But for the purposes of this exercise, I’ve carried out more limited calculations.

Read more: 'Sustainable tourism' is not working – here's how we can change that

But we wouldn’t shut down tourism, as we know it has a positive impact on our economy. And research generally shows that immigration has a slightly positive effect on Australia’s employment rate and gross domestic product (GDP). A recent government report also shows that cutting Australia’s migration rate would cost the budget billions of dollars, lower living standards and reduce jobs growth.

Both tourism and migration make a positive impact to our economy, and no one group should be blamed for draining our resources.