Despite the hype about its capabilities, there are questions about the F-35 Joint Strike Fighter's operational readiness, writes Steven L. Jones. 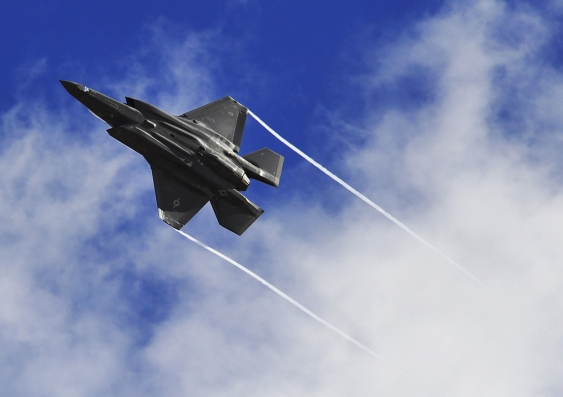 The AU-1 and AU-2 aircraft, at a reported cost of US$94.6million each, were the first two Australian F-35s to roll off the Lockheed Martin assembly line in Fort Worth, Texas, in July 2014. In December that year, both aircraft were flown to Luke Air Force Base in Arizona to join an international pilot training pool.

The Australian government approved the purchase of 14 F-35A fighters in November 2009, and a second tranche of 58 aircraft in April 2014, equipping three squadrons. A further tranche of 28 aircraft, bringing the total up to 100 aircraft for a fourth squadron, has yet to be decided on.

But there have been several questions raised about the JSF’s effectiveness and readiness to be used operationally.

Is the JSF ready yet?

Lockheed Martin is developing three versions of the Joint Strike Fighter: the F-35A for conventional takeoff and landing; the F-35B for short takeoff/vertical landing; and the F-35C for aircraft carriers.

The F-35B “jump jet” variant achieved what is known as Initial Operational Capability (IOC) on July 31, 2015.

For the Royal Australian Air Force (RAAF), IOC is the basic level of operational readiness, when “one or more subsets of the capability” can be deployed on operations. This means that it can go to war and perform some combat missions, but some things still need to be developed.

For the RAAF, Final Operational Capability (FOC) is when the “entire capability” can be deployed on operations and is fully ready for war.

However, the United States Director of Operational Test and Evaluation (DOT&E), Michael Gilmore, was critical of the US test. He said in a 2015 memo:

With regard to the software “block”, an incremental approach to software development, Gilmore said in the memo:

Additionally, it showed that a number of maintenance and reliability problems that he said:

Further details on the progress and deficiencies of the aircraft can be found in the DOT&E evaluation of the F-35 for the 2016 financial year.

The F-35A variant, which Australia is buying, achieved IOC with the US Air Force (USAF) on 2 August 2016, but the aircraft was also criticised for its deficiencies.

The US-led F-35 Joint Program Office (JPO) has been unfazed by the DOT&E reports, issuing a statement in January this year that said:

The JPO statement detailed a number of areas of such progress and noted that the development program was more than 90% complete. But it also recognised that:

One of the key capabilities of the F-35A is its stealth, the ability to avoid enemy detection. But military technology is a dynamic process, and no advantage lasts for ever, as counter-measures are invariably developed, and stealth is no exception.

In September 2016 there were reports that a Chinese military company had announced it had developed a new form of radar able to detect stealth planes 100km away. But this so-called “quantum radar” is far from being ready for operation, if it even exists outside a laboratory.

As well as the Chinese, researchers in the US, UK and Canada have been working on developing a “quantum radar” for a number of years, including F-35 manufacturer Lockheed Martin.

There are other ways of detecting stealth aircraft, which are more technologically mature than quantum radar, such as low-frequency radar and infrared search and track.

But the Sir Richard Williams Foundation, an independent research body on looking at Australia’s defence and security polices, argues that stealth is about more than a low radar cross section:

The Australian defence force sees the F-35A as more than just a replacement for older aircraft. According to Air Vice-Marshal Chris Deeble, Australia’s JSF Program Manager, the “JSF is a catalyst for change” in the future of the air force.

The RAAF’s Plan Jericho intends to use the introduction of the JSF to transform the Australian air force “into a fifth-generation air force”. By fifth-generation the RAAF means one that is fully networked with aircraft just part of that network.

Lockheed Martin told an Australian Senate committee that the F-35 was designed to be a “key net-enabling node in a system of systems, gathering and transmitting data across the defence network”.

While Australia must still wait before its F-35 aircraft become operational, the USAF is looking to send small F-35A units to Europe and the Asia Pacific this year. It’s also hoping to deploy the F-35A to fight the Islamic State group in the Middle East in the not too distant future.

So if you want to take a look at the aircraft that’s at the centre of such attention then head to the Avalon airshow, between Melbourne and Geelong, March 3 to 5. The two F-35As are due to fly out on Sunday.

Steven L. Jones was awarded his doctorate in International Relations in 2016 from UNSW Canberra. His thesis examined Australia's procurement of the Joint Strike Fighter.