Westfield's Frank Lowy has revealed that his family has given away more than $350 million in the past 10 years, telling a UNSW audience that “people who have a lot should give a lot”. 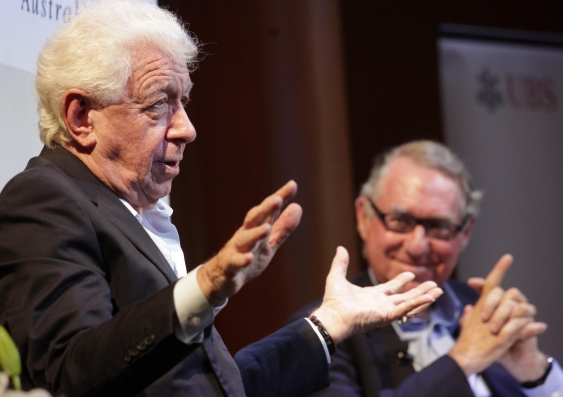 Westfield founder Frank Lowy has revealed that his family has given away more than $350 million in the past 10 years, telling a UNSW audience that “people who have a lot should give a lot”.

The never-before-published sum of $350 million makes the Lowy family Australia's most generous philanthropists.

In a candid conversation with UNSW Chancellor David Gonski as part of a Philanthropy Australia event, Mr Lowy told 250 invited guests that his philosophy of giving was summed up as: “When you have a little, give a little. When you have a lot, give a lot”.

In response to a question from Mr Gonski about the scope of his philanthropy, Mr Lowy said: “In the last 10 years the Lowy family has given away $350 million.”

The easiest way to give was to simply sign a cheque, Mr Lowy said. But he added that a more satisfying contribution was to engage in community service.

“If you see a cause that you believe in then you should do something about it.”

Having made his fortune from the success of his company Westfield Holdings, Mr Lowy has supported hundreds of causes. At UNSW he financially supported the library at the Australian Graduate School of Management and contributed to the construction of the award-winning Scientia Building. In 2007, he donated $10 million to help build UNSW’s Lowy Cancer Research Centre, which opened in 2010.

Asked by Mr Gonski how other wealthy people could be encouraged to give as much, Mr Lowy said being prepared to put your name to donations was crucial.

“When you asked us for the cancer research contribution, we would have been quite happy to do that anonymously. But you said, ‘no we need your name, because other people will see it as an example and may want to aspire to be like you’."

Mr Lowy told the gathering his mother, who had protected her young family through the horrors of the Holocaust, had heavily influenced his views on giving.

“During those terrible days in 1944, we were living in the ghetto and my brother risked his life to bring us some food. And I sneaked out at night to get it off him.

“So that was almost 80 years ago now and it is still ingrained in my mind.”

On corporate giving, Mr Lowy said any company that makes money out of the community – and that’s all of them – should give something back,  “as long as it’s not done simply for the glory of the company that gives it”.

“UNSW has no greater private supporter than the Lowy family,” Professor Hilmer said. “Philanthropy is critical to universities and there is no great university anywhere in the world that is not supported in some significant manner by private individuals.”

The 'In Conversation' event was part of a series organised by Philanthropy Australia in partnership with financial services company UBS.

See a video excerpt of the conversation here.