The arrival of light rail provides an efficient and environmental option for people bound for Kensington campus. 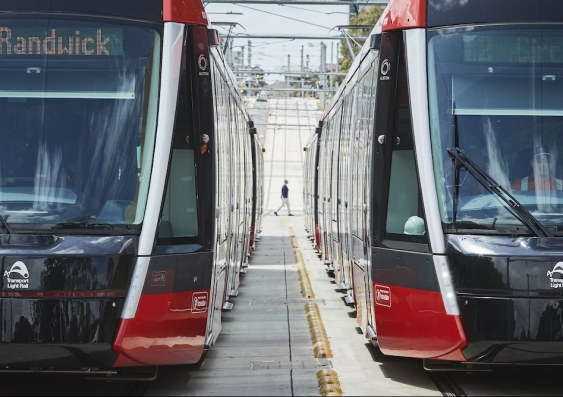 When crowds of people chased the last tram to La Perouse down the road in 1961, waving goodbye to a Sydney institution, nobody imagined that in a distant future they would again see trams carrying crowds of people through the eastern suburbs.

Things are a little different now – the faded green and yellow carriages have been replaced by sleek red machines, conductors no longer perch at the back door and the routes have changed somewhat. But the romance and excitement around light rail has remained and with the first branch of the new CBD and South East Light Rail opening in December, all eyes are on Randwick.

Like its predecessor, the new light rail begins its journey from Circular Quay, linking with the ferry services to deliver commuters to the eastern suburbs. The 12km route makes its way through the city, stopping at Bridge Street, Wynyard, QVB, Town Hall, Chinatown and Haymarket before reaching Central station, where many UNSW staff and students will board.

The new light rail platforms are located on Chalmers Street, just outside the entrance to the train station, and is known as Central Chalmers Street to ensure there is no confusion with the stop on the Inner West line, which departs just outside the intercity platforms. It consists of a side platform closest to the train station and an island platform, each 90 metres in length. 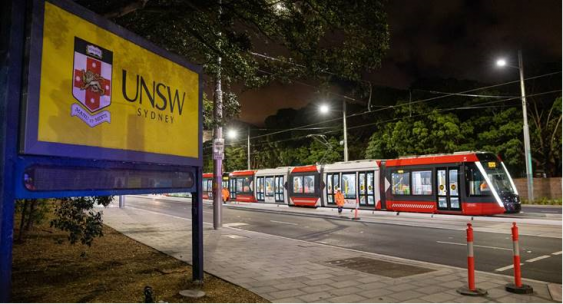 From there the tracks head down Devonshire Street and through Surry Hills to Anzac Parade before splitting at Alison Road. The Randwick branch heads down Alison Road, past Randwick Racecourse and UNSW’s High Street entrance, near Gate 9, before continuing on to Randwick. The Kingsford branch – which is due to open in 2020 – takes in ES Marks Athletics Field, the Anzac Parade entrance to UNSW and finishes up at The Juniors Kingsford.

Each tram is 67 metres long and capable of carrying up to 450 passengers, which is roughly equivalent to nine standard buses, making them among the longest passenger trams in the world.

The light rail is a frequency-based service, rather than running to a timetable, and trams are to depart every four minutes between the CBD and Moore Park and every eight minutes to Randwick and Kingsford from 7am to 7pm, light rail’s ‘peak period’.

The environmental benefits are significant, with a 663,000-tonne reduction in greenhouse gas emissions over 30 years through the reduced dependence on cars and buses. Light rail also uses 10 times less energy than a car per passenger per kilometre.

The South East bus network changes to accompany the introduction of light rail. The light rail has been designed to complement bus services, not replace them, and some express, all-stops and cross-city services continue to operate.

Testing and driver training have been taking place over the past months, with the red trams quickly becoming a familiar part of the landscape around campus. Transport for NSW has awareness campaigns in place to educate drivers, cyclists and pedestrians on safety around light rail.

Pedestrians have been urged to be vigilant and to keep their eyes up while walking around light rail tracks. An NRMA report from July this year noted that more than one-third of pedestrians crossed busy roads while looking down at their phones or wearing headphones. With the increasing frequency of trams around the UNSW campus coming into summer, new safety campaigns aim to ensure everyone is vigilant while walking, riding or driving near tracks.

Since the Sydney trams stopped their operations almost 60 years ago, a lot has changed at UNSW. When the last tram pulled into the sheds, the university was a fledgling institution with a small contingent of students. Today there are almost 60,000 students and more than 6000 staff. The addition of light rail as a transport option is a significant step in the connection of the campus to the wider Sydney community.

While they may not look much like the trams that trundled down Anzac Parade in the first half of the 20th century, the new light rail is sure to have just as big an impact on the culture and the psyche of the city. 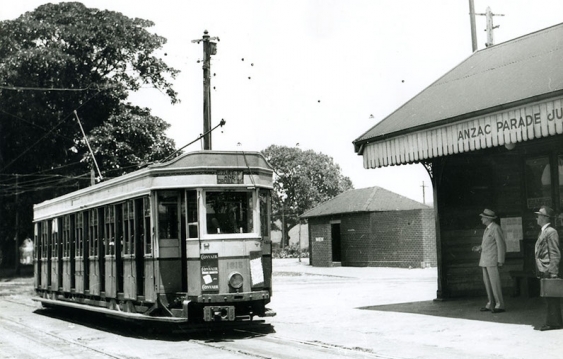 Once beloved, then in the slow lane

From the late 1800s through the middle of the 20th century, trams were a huge part of life in Sydney. The city had the second biggest tram network in the Commonwealth, after London, and at its peak in 1945 there were 405 million annual passenger journeys taken.

From humble beginnings with horse-drawn and steam trams, Sydney soon moved to an electric power supply and the tramways were replete with passengers from dawn to dusk. Many older Sydneysiders have fond memories of the green and yellow trams, bustling with people, making their way through the city.

But the trams fell out of favour among the city’s power brokers in the post-war era. No longer synonymous with a modern city, trams were seen to be blocking progress – and traffic – of the new kid on the block in transport, the motor car.

With car ownership skyrocketing, motorist groups lobbied the government, who soon began the move to close down the trams – a process that was finalised on 25 February 1961 when the gates of the Randwick Workshops closed for the final time.

The move from public to private transportation was part of the zeitgeist of the post-war era. As the environmental impacts of these decisions are now being better understood and more acutely felt, a return to light rail in the CBD and eastern suburbs is less a nostalgic nod to the past than a vital look to the future.