The former Canadian junior tennis champion recently took her role as fundraiser to new heights, climbing Mount Kilimanjaro to support research into liver cancer, the disease that killed her father. 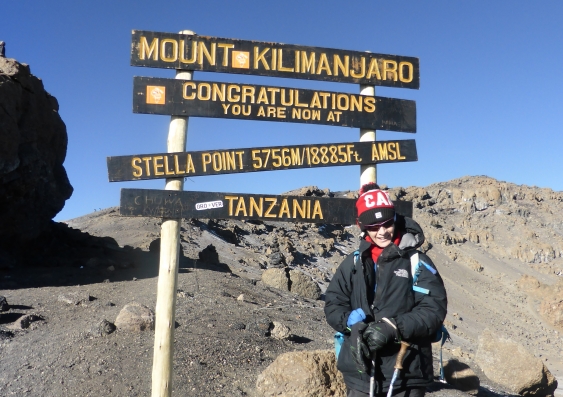 On the summit of Mount Kilimanjaro. Photo: Supplied

Climbing Kilimanjaro wasn’t just about Dad I also wanted the challenge. Coming from Vancouver, mountains are in my blood. Mum was a great hiker and she passed on her love of nature to me. I’ve always been physically active – I ski, run, kayak and play tennis and golf – but it took me a year to prepare for the climb. Physically I knew I’d be fine, but I was worried about my mental stamina. It’s definitely the hardest thing I’ve ever done.

After five days’ climbing, this incredible sense of peace came over me; it was like a feeling of pure joy. We were at base camp and I could see the summit and all I could think was, “Whatever you’re going to need … you’ve got within you.”

Sport touches our emotions – I learned young how to win and also how to lose – though it took longer to learn the latter.

Dad left when I was five years old and I didn’t see a lot of him. But he visited and was the first person to hit me a tennis ball. He taught me how sport engages our mind and requires concentration and to be present. He also taught me how sport touches our emotions – I learned young how to win and also how to lose – though it took longer to learn the latter!

I left Canada to pursue my tennis career in Sydney at age 17. Mum was a single mother and she thought it was a great opportunity. I boarded with family friends at Bondi Beach, enrolled in high school and immersed myself in training. I was the Canadian Junior Champion, but looking back on it, even at 17, I was too old for tennis. I had natural ability but I never had the mental stamina. Instead I focused on getting into university.

I wanted to study at UNSW. It seemed young and vibrant. I started secondary teaching, but quickly realised I was more interested in economics. (Former vice-chancellor) John Niland was the head of school and Peter Shergold (former secretary of the Department of the Prime Minister and Cabinet and former CEO of UNSW’s Centre for Social Impact) was my honours supervisor. Economics opened my mind about how to look at the world.

My first job was at UNSW as a research assistant in the School of Economics. We were researching Bradmill Textiles, at the time Australia’s only denim manufacturer, and Bradmill eventually approached me to work for them as a market researcher.

I knew I’d never go back to the corporate world when I moved into philanthropy. I’d been headhunted by KFC early in my career to manage their store performance and promotion, and then worked for major Australian PR firms, eventually running my own PR company, but I got sick of pitching for work. I made a conscious decision to move into philanthropy and ended up working with the World Wildlife Fund and the Leukaemia Foundation.

I always thought it would be nice to return to UNSW – to complete the circle. I deal mostly with bequests so I’m building relationships with older alumni who believe education is not only vital, but a great equaliser. It’s easy to open up a conversation about donating because they have a relationship with UNSW and they love it, as I do.