In 1988, UNSW became the first Australian university to offer sports scholarships. Thirty years on, the scholarships are shaping the lives of a new generation of student athletes. 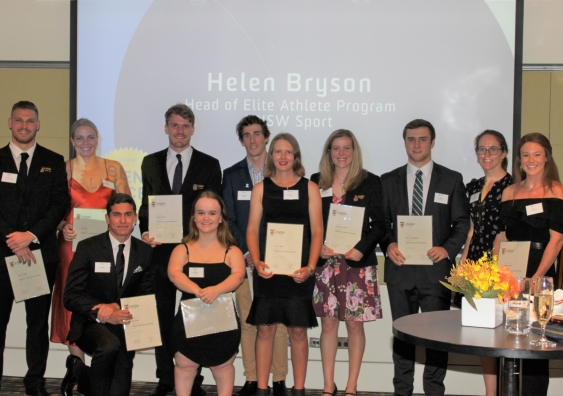 The current group of Ben Lexcen scholars were acknowledged for their contribution to the program at the 30th anniversary event. Photo: Andrew Hall

It’s been 30 years since the first Ben Lexcen scholarships were awarded to six students, who each received $1000 to put towards balancing study and their elite sporting careers.

In celebration of this milestone, current and former Ben Lexcen scholars came together with donors and staff to celebrate at the Hilton Sydney on Wednesday evening.

Notable former scholars shared their stories with the crowd, detailing what the scholarship had meant for their sporting and academic lives.

Kneller, who received a Ben Lexcen scholarship in 2009 while studying Commerce and Engineering, said the non-financial support of the scholarship was just as valuable to the elite athletes as the annual grant they received.

“I had to convince [my lecturers and tutors] that I wasn’t looking for the easy way out,” he said.

“Sport was a big part of my life and I was trying to fit in university around that.

“I was trying to ask for assistance, and it wasn’t always perceived that way.

“To have assistance to have the discussions with lecturers and tutors so I could set myself up for life after sport was so important.”

Dr Melanie Webb, a Ben Lexcen scholar in 1989, had to take two years off from studying Medicine to pursue her world championship dream as a windsurfer.

When she returned to UNSW, the scholarships had just been implemented and she was able to take one up in the second year after her return.

“It was lovely to be acknowledged and supported financially by people who appreciated just how tough it was for a student competing at an international level,” Dr Webb said.

“For a uni student on a shoestring budget, it meant the world to me.

“The money brought me time to study and to train and compete – that was the beauty of it.

“The free use of the gym and pool were a crucial part of the scholarships as well.” 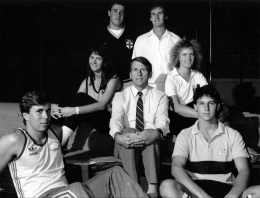 The original group of six Ben Lexcen scholars from the launch of the scholarship program in 1988. Photo: UNSW Archives

The 15 current Ben Lexcen scholars were also recognised at the event, coming from a diverse range of sports including cricket, skiing, athletics, water polo and swimming.

Kneller emphasised to the current students that the transition to life after sport wasn’t an easy one, but by taking the opportunity to balance study with their sport, they were setting themselves up in the best way possible.

“It’s a big thank you from me to the founders, to current and past supporters of the Ben Lexcen scholarship, for helping me achieve my sporting goals, my academic goals, but also facilitating that transition and really giving me the basis and the groundwork in pursuing my education to set me up for life after sport,” he said.

The Ben Lexcen scholarships were named after the key designer of the Australia II yacht that won the America’s Cup in 1983. Lexcen designed the winged keel that is recognised as having changed the game.

Since its launch in 1988, following the death of Lexcen, the scholarship has had many famous names etched in its history.

From Australian cricket legend Alex Blackwell to Olympic and Commonwealth Games medallist Jane Saville, the scholarship has a star-studded history, and from the incredible achievements the current crop of students has already notched up, it seems it is destined to produce many more stars in its future.