Plans for a new home in a more friendly climate are a lifeline for the critically endangered mountain pygmy-possum. 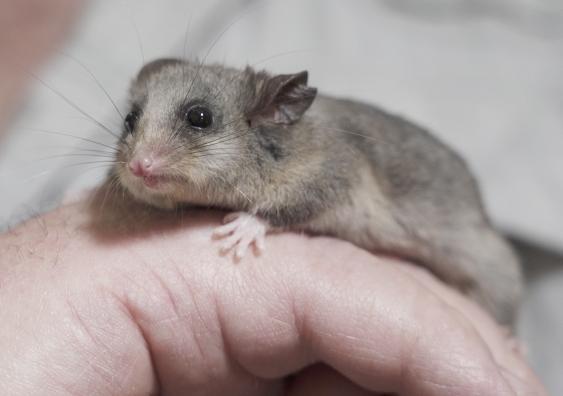 A plan to save the mountain pygmy possum by taking them from their alpine habitat to a warmer, lowland rainforest environment is inspired by fossil evidence up to 25 million years old.

In a study published in Royal Society’s Philosophical Transactions B, researchers argue that the mountain pygmy-possum (Burramys parvus) is a species living on the fringes of what its biological ancestors would have enjoyed as a more temperate, less extreme environment.

And with the clock ticking on Burramys’ future, the authors, including scientists from UNSW’s School of Biological, Earth and Environmental Sciences (BEES), have started a breeding program in Lithgow, NSW, in a bid to acclimatise the diminutive possums to more hospitable, lowland surroundings.

UNSW Professor Mike Archer, a palaeontologist who has led research into the Riversleigh fossil deposits since 1976, says the mountain pygmy-possum is one of the species most vulnerable to climate change in Australia, and faces extinction if alpine snowfalls continue to decline as climate modelling predicts.

“These possums are one of the few mammals in Australia that hibernate during the winter,” he says. “They hibernate deep within humid rock piles. Snow cover on these rock piles provides critically important insulation from the sub-zero air above. The rockpiles also provide shelter in summer.”

Field research into how these possums have survived the extreme alpine conditions was long carried out by Dr Linda Broome and more recently Dr Hayley Bates, co-authors on the published paper.

“To hibernate successfully, they need temperatures to hover between 1.5 and 2.5 degrees Celsius,” says Dr Bates, Associate Lecturer at BEES. “But if there isn’t enough snowfall, or snow melts early because of a warming or drying event, the outside cold air will penetrate the rocks. Anything less than 0.6 degrees will wake them from their hibernation and they can shiver and starve to death. You just need two bad winters like this and the species could collapse.”

It is estimated there are no more than 2500 Burramys living in alpine regions of NSW and Victoria.

But rather than be gloomy about the future for the Burramys, Professor Archer is inspired by the fossil record to suggest a way to avoid extinction.

“The fossil record for all other species in the genus Burramys indicates that their current habitat is a far cry from their comfort zone for the last 25 million years,” he says. “All previous populations thrived in cool temperate lowland rainforest communities – not the alpine one.”

Professor Archer thinks that the mountain pygmy-possum, which was first discovered as a living animal in 1966, has been marooned in a less-than-ideal alpine environment where it has been forced to use strategies such as hibernation to survive.

“What probably happened is that the modern species followed cool rainforest which invaded the alpine areas during a period of relatively warmer, lush conditions. After these conditions deteriorated with further climate change, they were stranded in an environment that was at the extreme end of their adaptability.”

Professor Archer and his colleagues from UNSW, University of Sydney, University of New England and various local and international environmental organisations hatched the plan to establish a colony in lowland areas of dense forest. There are now two breeding pairs in Secret Creek Sanctuary at Lithgow which are being maintained in temperatures commensurate to the forest. The group is aiming to start the colony with about 25 individuals. Other threatened animals including the Corroboree frog and swamp tortoise (Pseudemydura umbrina) could be rescued in the same way.

“It’s not unusual for endangered species to be occupying the ‘extreme’ edges of a once much wider habitat. Giant pandas, for example, were once widespread over lowland areas but, because of agriculture, have long since been confined to mountainous areas.

“Understanding former distributions, even way back in time, can provide new insights into translocation strategies that might work for species otherwise threatened in the extreme edges of their once much wider distribution.”