UNSW hosted the red carpet world premiere of 'From Sydney with Love', with the university in a starring role. 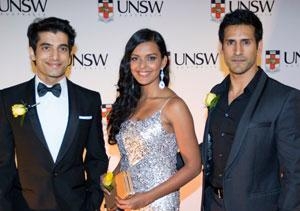 UNSW has hosted the red carpet world premiere of the much-anticipated Bollywood film, From Sydney with Love.

The movie, written and directed by Prateek Chakravorty, who also stars in the movie, was filmed on campus at the University and is set against the backdrop of Sydney.

Prateek, grandson of late Hindi film director Promod Chakraborty, has drawn on his own experiences and fond memories of his time as a student in Australia and created a typically colourful and musical Bollywood-style extravaganza.

It is the story of Meghaa Banerjee, a small town girl from West Bengal (played by Bidita Bag), whose dreams come true when she wins a prestigious scholarship to UNSW. She leaves her family and culture behind, makes new friends and falls in love. What results is a fun, quirky, emotional and furiously endearing love story set across two hemispheres.

Employing over 300 Australian cast and crew, From Sydney with Love is the realisation of a long-held dream for Chakravorty and a proud, vibrant way to showcase the relationship between the Australian and Indian film industries.

"UNSW's tie up with From Sydney with Love is consistent with its traditions of thinking outside the box,” says film maker Anupam Sharma, a UNSW alumnus and the movie’s Australian Head of Production.

“It was a professional delight to watch my old uni mobilise support overnight to enable us to film on campus in the most welcoming way. I am glad that the University that gave me the tools to make movies is now supporting this production.”

Mr Sharma says UNSW’s red carpet premiere “is a milestone in the growing links between India and Australia, particularly in film and media.”

Pro-Vice-Chancellor (International) Ms Jennie Lang said she was thrilled that UNSW was the first Australian university to 'star' in a Bollywood film.

“We were Australia's first international university, enrolling students from 1952 on Colombo plan scholarships. So it’s only fitting that as we celebrate 60 years of international education, Bollywood comes to UNSW!”

Ms Lang said UNSW was pleased to support the film, which further strengthens the solid ties with India and reinforces the University’s commitment to the Indian student community.

In 2010, UNSW unveiled a bust of Mahatma Gandhi on the library lawn – a gift from the people and Government of India.

“It serves as a constant and peaceful reminder of a commitment to tolerance, multiculturalism, international education and partnerships,” Ms Lang said.

From Sydney with Love premiered at UNSW’s Ritchie Theatre with full Bollywood-style fanfare. The film's cast flew from India for the event.

A selection of media coverage: Today Tonight, Sydney Morning Herald, Ninemsn and the Times of India.

The film opens in India on August 3.