Opinion Book Review: Country is an urgent call to learn from Indigenous knowledges to care for the land

Country by Bruce Pascoe and Bill Gammage is a dialogue between experts on First Nations ways of farming and agriculture. It is also a call to Australia to look after Country better. 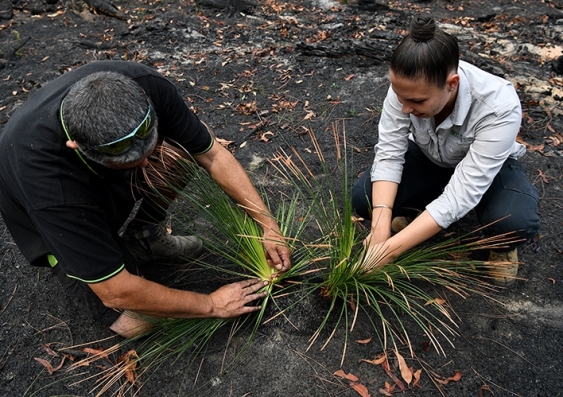 Pascoe and Gammage affirm in varying ways that Aboriginal people were - and are - farmers and agriculturalists. Photo: Joel Carrett/AAP Image

“We know we can do better than this, don’t we?”

The book is part of the wider six-part “First Knowledges” series published by Thames and Hudson in collaboration with the National Library of Australia. It focuses on a collection of topics, including astronomy, design, law and, in the case of this book, Country.

As stated by editor Margo Neale in the introduction, the overarching series is designed to “stimulate and provoke you to enlarge your mind and expand your worldview to encompass limitless other possibilities, including ways in which you can learn from the Aboriginal archive of knowledge embodied in Country.”

For many, the book will be a timely invitation to be a part of constructive dialogue and a call to take action, especially in light of the lacklustre resolutions from COP26 and following the Black Summer bushfires.

For myself, a non-Indigenous scholar researching waters throughout Eora Country, I humbly come to this review with deep awareness of my position, and firmly take up the invitation to be part of this dialogue and follow through with action.

A conversation between experts

Country: Future Fire, Future Farming is crafted to present the two authors’ own personal perspectives, while drawing on rich evidence to support their claims.

After their co-written opening chapter, Pascoe starts off the book’s first three solo-written chapters. Then, Gammage takes over with the next four, before they round off their thoughts in two distinctly separate but ideologically similar concluding chapters. 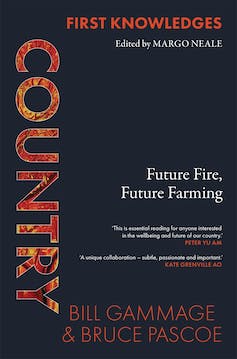 At the core of their book, Pascoe and Gammage affirm in varying ways that Aboriginal people were - and are - farmers and agriculturalists. Pascoe expands on this in his chapters by describing the ways Aboriginal peoples have made use of the plants and animals across Australia.

According to Pascoe, using and understanding these knowledges can make farming in Australia better.

Gammage’s chapters focuses almost entirely on fire – its use by Aboriginal people as a tool to farm the land, and the detrimental misunderstandings of Aboriginal fire practices appropriated by non-Indigenous people.

Consistently throughout the book, there is a subtle dialogue that emerges between the two authors. The dialogue could at times be more pressing, especially when contrasting perspectives arise, such as their differences in dating Aboriginal people’s presence on the continent or their interpretations of particular terms.

On their own, the wonderfully detailed chapters provide ample room to reflect on key ideas (farming and fire) which both authors have become known for. That said, at times, I craved a more emphatic conversation between the two. 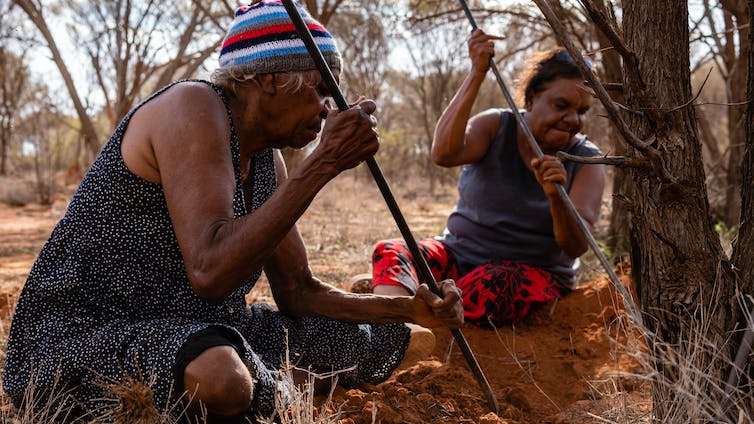 Payment where payment is due

In both subject and in tone, Country: Future Fire, Future Farming feels like a polite conversation, with any arguments quite restrained.

Pascoe writes with urgency and an enthusiasm as vibrant as the landscapes he describes. He opens the book’s first chapter with an unequivocal call to arms – what is happening across Australia with land care (as well as the many other issues relating to Indigenous affairs) is not good enough anymore.

Quite consistently throughout, Pascoe reaffirms the idea that Aboriginal land care is done with the aim to better the “common wealth”, in contrast to the damaging practices of non-Indigenous settlers.

He asserts Aboriginal people should be the primary beneficiaries of wealth generated by land care practices that are environmentally and economically productive.

This tension of wanting to celebrate Indigenous knowledges while also ensuring it is not appropriated by non-Indigenous people for economic gain has been articulated as “bio-piracy.” The scholars Dr Daniel Robinson and Dr Miri Raven focus on this issue extensively in their work.

We know we can do better than this

The bulk of the book outlines the many intricate knowledges that Indigenous people across Australia have maintained.

Pascoe works tirelessly to address the misconception surrounding “hunter-gatherering” - the idea that Indigenous peoples were only ever nomadic hunter-gatherers – which is also at the core of Pascoe’s acclaimed work, Dark Emu.

In addition, Pascoe’s witty, sharp, and conversational chapters on plants and animals are what many have come to expect of him.

Gammage presents a pragmatic recount of the importance of fire to people in Australia – both Indigenous and non-Indigenous, now and in the past. It is detailed and logical. In places, the practicality of Gammage’s writing overwhelms the reflexive narrative I was craving, especially when read against the works of Victor Steffensen or Vanessa Cavanagh.

That said, both the breadth of materials the two authors engage with, and the depth with which they are analysed, is impeccable.

Recent critiques of Pascoe’s engagement with evidence in relation to Dark Emu have brightened the discussions in this space. Quite pleasantly, Pascoe makes some effort to respond to these critiques, stating,

Hunting and gathering is a sustainable and healthy lifestyle but it is not the only thing that Aboriginal and Torres Strait Islander people did.

The book’s interpretation of historical material, such as Pascoe’s commentary on the Melbourne Museum’s recent Indigenous Bread research, or Gammage’s interrogation of historical archives, is invigorating, contemplative and lush.

Reading the book excites me to want to act to care for land, and respectfully celebrate Indigenous knowledges. If you have a desire to be part of the action, then this book is for you.

Country: Future Fire, Future Farming opens space for dialogue, but readers need to want to be part of this conversation to begin with.