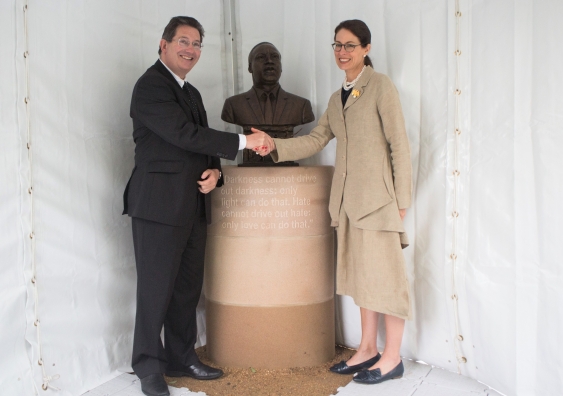 UNSW President and Vice-Chancellor, Professor Ian Jacobs, and US Consul General – Sydney, Sharon Hudson-Dean, lifted the veil from the bronze bust of the Nobel Peace Prize winner during a ceremony on Thursday.

The audience in attendance included Jennie Lang, UNSW Honorary Fellow Eric Tidwell, Managing Director at Intellectual Properties Management, the licensing manager of the Estate of Martin Luther King Jr, members of the US Consulate General and the UNSW community.

In his remarks, Professor Jacobs said it was important to reflect on the progress society has made in furthering King’s vision 50 years after his untimely death. Professor Jacobs also acknowledged the vital role universities have in achieving a more just and equal society.

"Equity, diversity and inclusion are essential if UNSW is to make a positive impact on, not just Sydney, not just Australia, but on the world," said Professor Jacobs. "I know that by having this bust here among other titans of human rights, Mahatma Gandhi and Nelson Mandela, Dr. King’s story will continue to inspire those who pass through this place." 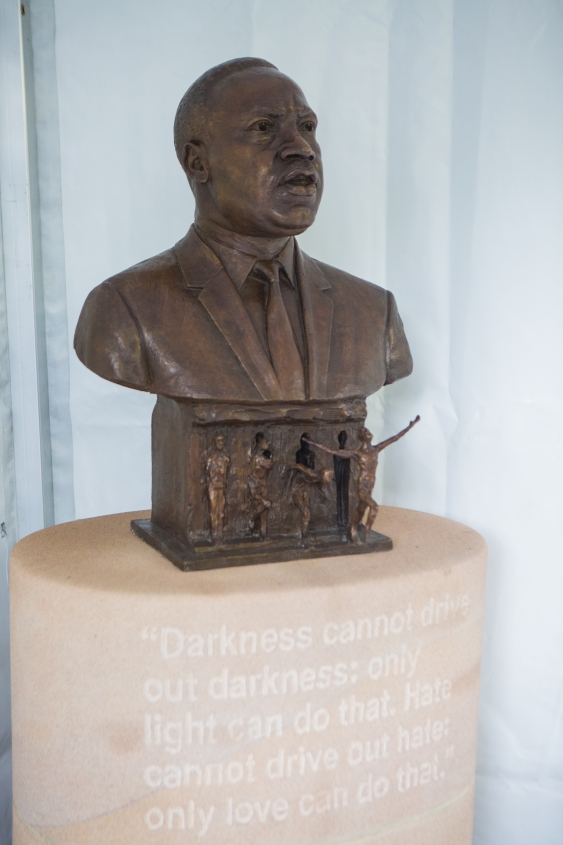 Crafted by internationally recognised sculptor Zenos Frudakis the bust is a permanent tribute to Dr King whose tireless and impassioned campaigning in the African American civil rights movement led to the ending of racial segregation and racial discrimination in the United States.

The bust is the first sculpture of Dr King to be displayed in a public space in Australia and the only sculpture in the world to incorporate Frudakis’ most famous work, the Freedom Sculpture, which depicts the idea of struggling to break free.

The bust is part of an ongoing UNSW project to honour the world’s most inspiring leaders and celebrates the close ties between Australia and the United States. It was made possible through the generosity of UNSW alumni in North America and the UNSW US Foundation, the US Embassy Canberra, the US Consulate Sydney, the King Center for Non-Violent Social Change, the US Trumpet Awards, the Australian Embassy in Washington D.C., and the US State Department.

"I am honoured to stand before you today as this magnificent bust of the Reverend Dr. Martin Luther King Jr is unveiled,” said Hudson-Dean. “And on behalf of the American people we are honoured to have Dr King, an icon of our country and our struggle towards a more perfect union, join your growing pantheon of civil and human rights visionaries who are memorialised on this lawn.

"Mandela, Gandhi and King – three citizens of the 20th century who saw injustice, saw their people struggling and suffering – and decided that they could not stand on the side lines and do nothing."

What would Gandhi do today?