A global consortium of leading climate change research universities is coming together as a new survey reveals the attitudes of Australians to climate change. 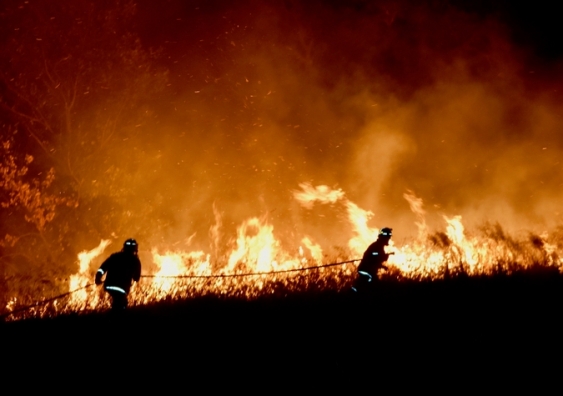 A majority of Australians believe it is right to talk about climate change during disaster events such as the current bushfire emergency.

And an overwhelming majority of people (62.7%) agree climate change is making some weather events more extreme, intense and regular.

A new UNSW community survey also finds a differing of attitudes towards issues related to climate change by those living in metropolitan cities compared to those in rural and regional areas.

UNSW President and Vice-Chancellor, Professor Ian Jacobs, said the survey highlighted that most people wanted greater government action to address climate change, and this was more apparent for city dwellers.

“Just over 67% of all people believe Australia needs a comprehensive climate change policy, and 53% say it is right to talk about climate change during an extreme event such as the current bushfire emergencies, compared to 35% who say it is not OK,” Professor Jacobs said.

Overall, 72% agree renewable energy is crucial in helping to reduce harmful emissions and slow climate change. Even more, at 76.8%, believe the best way to help Australia obtain a comprehensive climate change policy is through an open consultation process involving scientific leaders and the heads of the community, business and political parties.

In a new development, UNSW has begun an initiative in recent weeks to contact the world’s leading universities and researchers investigating climate change to create an international university climate change consortium.

“There is strong interest in forming this scientific global coalition with other climate-leading universities and we seek collective action to urgently address the challenge of climate change on a non-political basis,” Professor Jacobs said.

“We want to bring the best international minds together to respond to this challenge, and it is clear from our latest community attitudes survey that the Australian people support action like this.”

A leadership role for Australia on climate change is supported by 64.3% of people, while an even greater number support the creation of a global alliance of leading climate change researchers and universities to help political leaders understand the importance of addressing climate change.

Professor Matthew England, of the UNSW Climate Change Research Centre, said: “We know that climate change is already having a significant negative impact, so it is understandable that people are frustrated about the lack of leadership in tackling this issue. That is why we are engaging with international partners and research programs to help Australia transition to a low or zero-carbon emission country.

“We have some of the best scientific and business minds in the world right here at home, and we need to harness that capability to deliver action to reduce global carbon emissions urgently.

“If done correctly, Australia’s experience in renewable energy and energy storage technology will also deliver many economic and social benefits through the growth of new industries and manufacturing capability, powered by renewables, as well as new knowledge and technology export markets.”

The differing views between those living in cities versus country on how to deal with climate change are apparent on a number of questions, including by responses to the statement that an Australian climate change policy must ensure a fair or just transition to low or zero carbon emissions for all workers and industries.

While 64.5% of those in cities agree with this statement, only 51.3% of those in the country agree. And even though the worst impacts of climate change are not expected until the end of the century, 70.7% of people in metro areas say a strong climate response is needed now from the Australian government, compared to 54.1% of those living in rural and regional areas.

The community survey was of 1714 people nationally on 18 November 2019 by uCommunications Pty Ltd. Telephone numbers and the person within the household were selected at random. The results have been weighted by gender and age to reflect the population according to ABS figures.

Arctic ice loss is worrying, but the giant stirring in the South could be even worse