One of Australia's most prominent business leaders and philanthropists, Mr David Gonski AC, has been reappointed as Chancellor of UNSW for a third term. 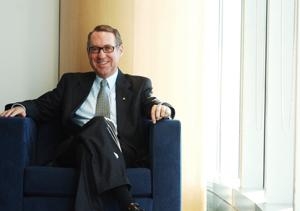 One of Australia's most prominent business leaders and philanthropists, Mr David Gonski AC, has been reappointed Chancellor of the University of New South Wales.

The UNSW Council this week voted unanimously to reappoint Mr Gonski for a third term, which will run until 31 July 2017.

The Council expressed its gratitude for Mr Gonski’s “significant work and achievements on behalf of UNSW during his term as Chancellor”.

Mr Gonski has had a long association with the University. First elected Chancellor in 2005 for a four-year term, he is the first UNSW alumnus (BCom, LLB) to hold the position. He is also Chairman of the UNSW Foundation.

Mr Gonski is Chairman of Investec Bank (Australia) Limited, Coca-Cola Amatil, the Guardians of the Future Fund, the National E-Health Transition Authority, the Sydney Theatre Company, and a Director of Infrastructure NSW. He last year chaired the Australian government’s Review of Funding for Schooling.