Opinion In debates about opening schools, we're neglecting an important voice: our children's

The NSW plan doesn’t measure up against international best practice. And Victoria doesn’t seem to be following a child-centred approach, either. 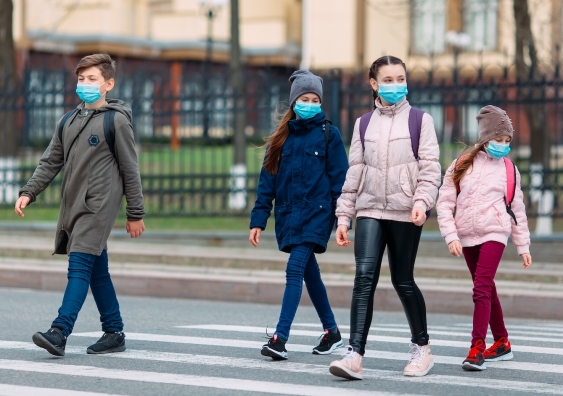 European countries have been asked to focus on “ensuring the right of children to be involved in all decisions that affect them”, in a newly released report ahead of the school year in Europe.

The report — from the “High-level meeting on schooling during the COVID-19 pandemic” held in July — states “very few governments” have made an effort to engage children in decision-making.

The report was released by the European Office of the World Health Organization (WHO), United Nations Children’s Fund (UNICEF) and the United Nations Educational, Scientific and Cultural Organisation (UNESCO).

It’s based on the premise school closures are detrimental to child health, well-being and educational outcomes. It recommends, from a child-centred perspective, that school closures be avoided as much as possible.

And it presents ways to help keep children safe from COVID when they do go to school.

Read more: From vaccination to ventilation: 5 ways to keep kids safe from COVID when schools reopen

Schools in New South Wales are on track to reopen by October 25 following four months of closure. The state government has introduced an incremental reopening plan. Kindergarten and year 1 children go back to the classrooms first, followed by other cohorts on weekly bases — a process that should be complete by November 8.

Victoria has not given certainty to whether children will return to the classroom in term 4.

When comparing the NSW plan to international best practice, it doesn’t measure up. And Victoria’s movements don’t seem to be following a child-centred approach either.

Where the back-to-school plans fall short

The number of children contracting COVID-19 in Australia continues to rise. Meanwhile, data from the United States and the United Kingdom show high transmission rates in primary schools, especially where insufficient safety measures are in place.

According to the NSW plan, school staff will have to be vaccinated by November 8, but high school students, who are eligible for the vaccine, are free to return to school without getting the jab. This means primary school children, for whom a safe vaccine is not available, will return to school before all adults are vaccinated. So schools will have high concentrations of unvaccinated individuals coming together under one roof, spending hours indoors, every day. 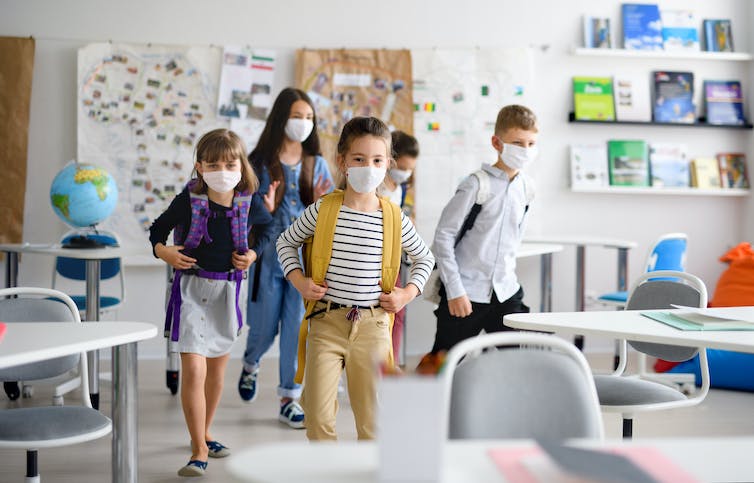 Despite their proven success in reducing transmission, masks will not be mandatory for primary school children when they return to school in NSW. Photo: Shutterstock

A study published earlier this month shows that, without mandatory masks and testing in primary schools, more than 75 per cent of students are at risk of infection within three months of returning to school. Universal mask-wearing can reduce student infections by 26-78 per cent, it says. Adding fortnightly testing can further reduce infections by 50 per cent.

The effectiveness of masks in schools has been proven in other studies too.

The European report recommends rapid testing in schools. Austria, for example, has developed a rapid screening policy, aiming to avoid school closures by identifying infected children, removing them from schools and locating other infected students through secondary tracing. Children perform the test themselves, and most children and parents were satisfied with this regime as it helped keep schools open and reduce transmission.

NSW has not introduced a similar plan.

Other recommendations in the European report include paying attention to children living in vulnerable situations, the effects school closures have on them, and how digital gaps can curtail their access to remote learning. Schools in Victoria are open to vulnerable children and children of essential workers.

But in NSW parents in LGAs of concern are “strongly encouraged” to keep their kids at home. Many of these are lower socioeconomic areas. This further marginalises children from communities who already suffer the most during the lockdown.

The July meeting in Europe heard that:

The Committee on the Rights of the Child warned … of the grave physical, psychological and mental impacts of the pandemic on children and called on countries to base their response not just on public health, but also on the broad framework of rights, including economic, social and cultural rights.

The report draws attention to several children’s rights governments should respect. Australia ratified the UN Convention on the Rights of the Child in 1990, which means children in Australia can expect the government to respect their rights.

The call to include children as part of decision-making follows a similar one from the UN Committee on the Rights of the Child in April last year.

Children have unique insight into how a school day looks. When presented with information about potential safety measures to be implemented – particularly around physical distancing — they will be able to provide views and solutions relevant to them and other children.

Participation of children requires more than giving them the opportunity to voice their concerns. Whenever a child speaks, there must be an adult willing to listen and to pay close attention to what the child is saying.

There is no evidence to suggest the NSW government gave children any meaningful opportunity to participate in the design of its back-to-school plan, nor that it based its decisions on any child’s rights assessment.

There is also no evidence to suggest the Victorian government is engaging with children as it prepares its own back-to-school plan.

A child’s rights assessment must account for a range of relevant rights under the UN Convention on the Rights of the Child. These include the rights to education, health, play, life and development. Children’s best interests must be a primary consideration, and this can not be done without giving proper weight to children’s own insights.

Emphasising physical safety and therefore closing schools while overlooking other equally important dimensions of children’s lives is not a child-friendly policy. Nor is opening schools in the name of facilitating adults’ “freedom”, without adequately protecting children’s rights.