UNSW has announced the first leaders of its Grand Challenges, an initiative to establish the University at the forefront of debate and policy response to the biggest issues of our time. 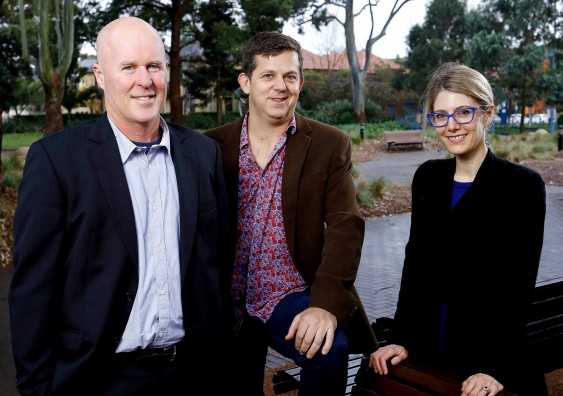 UNSW has announced the first three leaders of its Grand Challenges, an initiative to establish the University at the forefront of debate and policy response to the biggest issues of our time.

“The program is an important element of the UNSW 2025 Strategy and will champion the critical place of universities in public engagement and leading open and informed debate.”

As Academic Lead, Professor Brooks will be working with the University community to generate ideas for the program.

“We are consulting widely but the plan is to work with leads and host academics to curate a full year-round program of activities addressing up to six Grand Challenges at a time, with themes announced over the next two years,” says Brooks, an evolutionary biologist who heads up the Evolution and Ecology Research Centre.

“We will help UNSW researchers develop both the skills and the platform to reach large audiences, whether that’s through high-profile public events, debates, residencies, policy groups or collaborations with other world-leading experts.

“By building this approach into how we do business we can foster connections between disciplines and people to provide opportunities for global thought leadership,” he says.

The program will champion the critical place of universities in public engagement and leading open and informed debate.

Professor England sees his role leading the Climate Change Grand Challenge as an “outstanding opportunity to extend what I’ve been doing for years to raise the profile and public awareness of climate change and the science”.

UNSW is home to the country's leading climate scientists and renewable energy experts. But with all Faculties “having a stake in climate change”, England says activities will move well beyond the science to look at impacts and to work at identifying the best technological and policy solutions.

“We want UNSW to be a global point of reference for those shaping policy, including governments, international organisations, non-government organisations, community leaders and industry.

In the area of refugees and migrants, Professor McAdam is keen to engage across the University to bring different perspectives to the global debate to strengthen policy responses.

“As well as the legal questions in regard to forced migration, how do we respond to the psychological challenges of displacement, and how do we build better shelters and more resilient communities, for example? And what about the economic benefits of migration,” says McAdam, the founding director of the Kaldor Centre for International Refugee Law, which has quickly established itself as a leading international research hub.

“In addition to showcasing where UNSW is leading the debate and policy formulation, the Grand Challenges program is all about broadening the questions we ask. We want to build more collaborative projects to provide multi-faceted policy responses to one of the most pressing issues of our time,” McAdam says.

Does it matter how we “stop the boats”?