Opinion Explainer: what Sudan’s coup is about and why the rest of the world needs to act

Nation-building is hard, but the alternative is worse. In the wake of Sudan’s coup, the rest of the world needs to act fast, before it is too late. 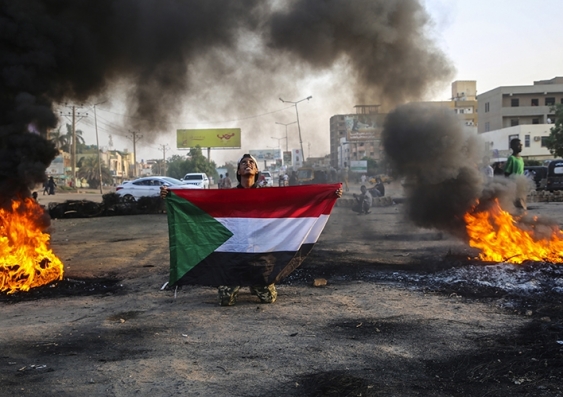 Sudan’s civilians are putting up a brave campaign of civil resistance against the military junta. Photo: Mohammed Abu Obaid/AP/AAP

The military coup in Sudan follows a longstanding pattern in which a short period of democracy in the country is brought to an abrupt, and often sticky, authoritarian end.

This time, however, the stakes are higher than ever. Not only is Sudan’s peace and security at risk, but so is the security of the wider region and beyond, as dangerous and incompatible interests are unleashed that threaten to pull the country in multiple directions.

The fall of Omar al-Bashir’s National Congress Party government in 2019 brought 30 years of authoritarian rule to an end. But it also meant the dynamics from this period needed to be carefully managed. At stake was not just peace and justice, but the very identity of the country.

Sudan had fractured into hard-line Islamist elements, informal and formal armed forces, political parties and a plethora of groups and armed militias. All of them claimed to represent the interests of the Sudanese people.

The fledgling transitional government that emerged was tasked with not only managing a country on the edge of a financial abyss, but doing so with an improbable power-sharing arrangement. The military would rule for a period of 21 months followed by the civilian group for the remaining 18 months until elections were held in 2023.

The dissolution of this arrangement will now unleash a frightening array of competing groups and entities, all of which have interests to protect. These interests reach well beyond the borders of Sudan and connect with other major conflicts worldwide.

Sudan’s Islamist sympathisers include former members of the National Congress Party (NCP) of Omar al-Bashir, as well as the Popular Congress Party (PCP) of the late Hassan al-Turabi – ideologue and architect of Islamic extremism in the country. Turabi’s interests have threaded through Sudan since 1983. They have supported Osama bin Laden as he was building al-Qaeda in the country from 1991-1996, while also engaging Egyptian Islamic Jihad, responsible for the 1998 embassy bombings, Hezbollah, the PLO and many more. 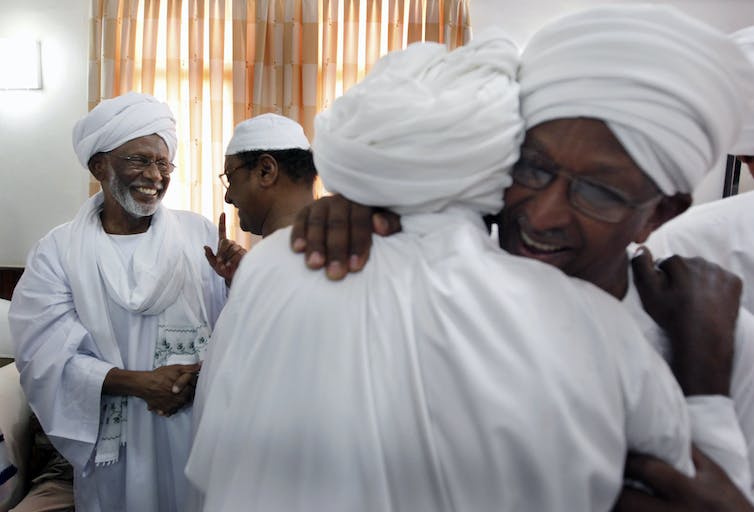 Hassan al-Turabi, left, at his home in Khartoum in 2009. Nasser Nasser/AP/AAP

Sudan’s Islamists have been supported by the Qatar-Turkey alliance, an on-off relationship with Iran and members of Gulf states such as Saudi Arabia and the UAE (at least until the revolution).

Many of the Islamists were jailed or went into hiding after the revolution. They now find themselves outmanoeuvred by the Sovereignty Council’s military faction that launched this week’s coup. Two major figures anchor this faction: General Abdel Fattah al-Burhan of the Sudan Armed Forces (SAF) and the Rapid Support Forces (RSF) led by Mohamed Hamdan “Hemedti” Dagolo.

This faction is politically pragmatic, equally dangerous and beset by internal divisions over their ambitions to control Sudan. Al-Burhan has been described as the military “architect” responsible for the genocide in Darfur. Hemedti was front and centre of the scorched earth campaign in that region, Khartoum’s June 3 2019 massacre, as well as illegal gold-mining operations in Jebel Amer, Darfur. 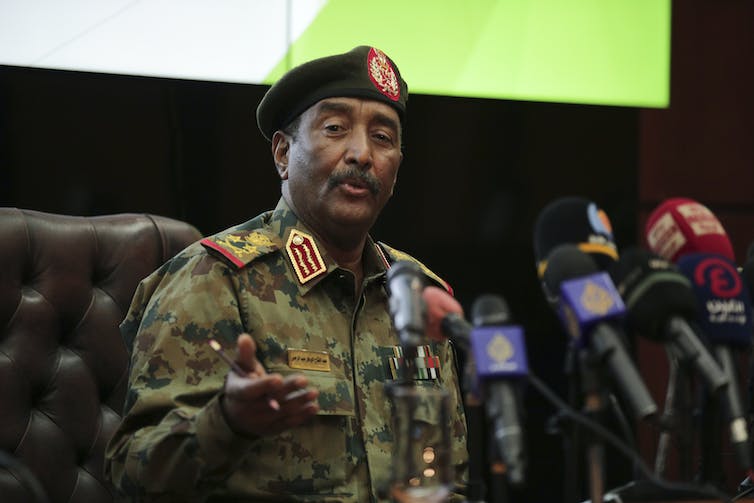 General Abdel-Fattah Burhan is one of the leaders of this week’s coup in Sudan. Marwan Ali/AP/AAP

In recent years, this group received support from Egypt, Saudi Arabia and the UAE, not least because Hemedti has also supplied his RSF militias to fight the Houthis in Yemen on behalf of Saudi Arabia.

Much of the revenue bypasses government coffers and goes into their private accounts abroad. This revenue makes the military side of the government financially unassailable. It also allows them to undermine the civilian government at every turn, including the creation of “rent-a-crowd” demonstrations in Khartoum to support their interests.

Given this situation, the beleaguered civilian side of the government has faced an impossible task. They could not financially outmanoeuvre the military faction or their foreign supporters. As a heavily indebted country, they have been in a parlous financial state driven by low tax receipts, military revenue streams that they can’t access and, until recently, little debt relief.

Sudan’s civilians are putting up a brave campaign of civil resistance against the military junta. It is possible they could push back the gains of the military. But to do so, significant diplomatic pressure needs to be brought to bear on countries supporting al-Burhan and Hemedti. On top of this, urgent attention needs to paid to forensic investigation of illegal revenue streams that bypass the government and undermine democratic change.

As with all transitions, there is a time when action is needed before it is too late. While the army are not natural bedfellows with the Islamists, they have been happy to look the other way for years while extremists operated from the country. With their powerful sponsors in the Gulf and beyond, the possibility of a dangerous power struggle inches ever closer.

This will not only affect Sudan’s civilians, but also refugees fleeing Tigray’s conflict and communities in the Sahel and on Europe’s borders, as the exodus of people from the country escalates.

If we have learnt anything from recent crises, it is that nation-building is hard, but the alternative is even worse. For Sudan, that nightmare is fast approaching. The question is whether the international community can act now to stop it, before it is too late.