The pioneering researchers have been honoured for excellence in biological sciences, physical sciences and innovation. 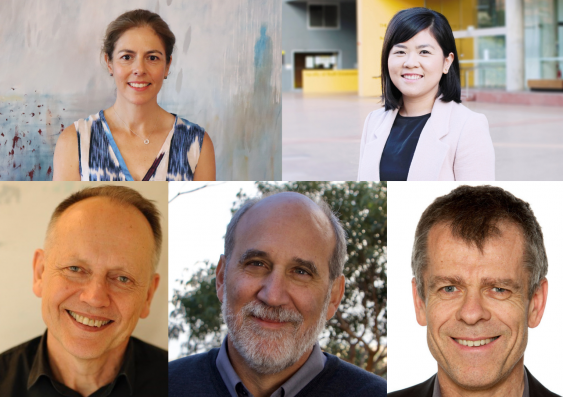 UNSW Sydney will pick up five awards at the 2021 NSW Premier’s Prizes for Science and Engineering presented at Government House in Sydney on Wednesday.

The awards recognise excellence in science and engineering, and reward leading researchers and educators for cutting-edge work that has generated economic, environmental, health, social or technological benefits for New South Wales.

Scientia Associate Professor Rona Chandrawati won the award for NSW Early Career Researcher of the Year (Physical Sciences). She is an emerging global leader in nanosensors and nanoparticle-based drug delivery, and Australia’s leading researcher in colourimetric polymer sensor technology. In the last five years, A/Prof. Chandrawati has achieved first-in-world results with applications in food safety, disease diagnosis and the treatment of glaucoma.

“I am deeply honoured to receive this award, and I’m happy our work in engineering nanomaterials to solve problems of global significance in food and health has been recognised,” A/Prof. Chandrawati said.

“This honour is also valuable recognition of the great work of my team.”

Emeritus Professor Peter Steinberg won the Excellence in Biological Sciences (Ecological, environmental, agricultural and organismal) award. Prof. Steinberg is one of the founders of the field of marine chemical ecology and a leader in the integration of macroecology and environmental microbiology. In recent years, he has become increasingly focused on building resilience into coastal systems faced with rapid environmental change, through habitat restoration and rehabilitation, and ‘eco-engineering’ of the built marine environment.

His work has had major lasting impacts on NSW, national and global marine environments. He developed a model for disease in seaweeds that has been adopted internationally and led the establishment in Sydney of Australia’s most successful kelp forest restoration project, bringing crayweed back to reefs to provide essential habitat and food resources. As the inaugural Director and CEO of the Sydney Institute of Marine Science (SIMS), Prof. Steinberg led the growth of the Institute from a single lab to one of Australia’s most significant marine science institutes.

“Our local marine ecosystems make an enormous contribution to the wellbeing of NSW, and also mean a great deal to me personally, so I am really pleased to see those efforts recognised by this NSW Premier’s award,” Prof. Steinberg said.

Prof. Dore said: “The Premier’s Award is a wonderful acknowledgment of the great academic and professional team I work with at Kirby Institute, and the importance of our work for vulnerable populations”.

Dr Louise Causer won the NSW Early Career Researcher of the Year (Biological Sciences) award. Dr Causer is a National Health and Medical Research Council Early Career Fellow at the Kirby Institute. Throughout her career as a clinician, medical epidemiologist and academic, she has demonstrated a strong commitment to international public health and infectious disease control. As a researcher, she has been pivotal in introducing point-of-care testing for sexually transmitted infections (STIs) in remote health care services.

“I am honoured to receive this award and to have my research contribution recognised in this way. My work is highly collaborative, and I acknowledge the support of my academic colleagues and strong, committed relationships with many health partners,” Dr Causer said.

“This award will facilitate opportunities to continue my research to improve the health and well-being of populations disproportionately affected by infectious diseases.”

Scientia Professor Richard Bryant AC received the Leadership in Innovation in NSW award. Prof. Bryant is the world’s leading authority in early psychological responses to traumatic events. He has identified the core biological and psychological factors that occur after trauma and that influence long-term trajectories of mental health, as well as developing early interventions to manage anxiety, depression and post-traumatic stress disorder (PTSD).

Prof. Bryant’s Traumatic Stress Clinic - the largest treatment centre in Australia - helped NSW become the first jurisdiction in the world to reduce PTSD in first responders, generating a mental health strategy for survivors of bushfire. In a world first, Prof. Bryant also adapted his early treatment protocol to develop a video conferencing program to address the mental health effects of the COVID-19 pandemic.

“Most of the world cannot access mental health care and so my research has focused on novel approaches that can give effective programs to those in need both in Australian and globally,” Prof. Bryant said.

“It is great that mental health is recognised in these awards, especially in the wake of the mental health costs of recent disasters and the pandemic,” he said. “Although the award cites me, it really belongs to a large team of researchers.”