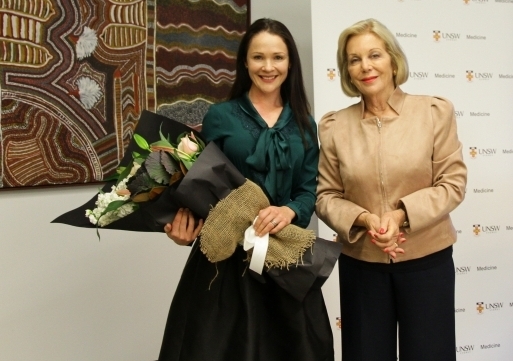 Award-winning Australian soprano and mental health advocate, Greta Bradman, has launched the 2017 Australian Mental Health Prize, seeking nominations to recognise Australians who have made outstanding contributions to either the promotion of mental health or the prevention and treatment of mental illness.

“I am delighted to join the Australian Mental Health Prize Advisory Group,” said Mrs Bradman. “I’ve experienced first-hand how debilitating mental illness can be and I understand that although it can take time to find a treatment plan to suit an individual, effective treatment is out there.

“I have witnessed the impact of mental health issues on people within the performing arts too, an area that until recently has received little to no attention from researchers.”
Scientia Professor Philip Mitchell, Head of the UNSW School of Psychiatry, said the University established the prize to raise awareness on what is working in the field of mental health for the sake of those living with the burden of mental illness.
Chairwoman of the Australian Mental Health Prize Advisory Group, Ita Buttrose, hopes the prize will help reduce the stigma around mental illness as well as help improve mental health care in Australia.
“The number of people with mental illness accessing treatment is half that of people with physical disorders, mainly due to stigma and lack of awareness of treatment options. We urgently need to turn this around.”
Nominations are open until 31 August. Visit australianmentalhealthprize.org.au.

Academic excellence and an enviable international outlook have helped UNSW climb four places to 45 in the QS World University Rankings for 2017-18. The result puts UNSW as the highest-ranked university in Sydney and in NSW, and third in Australia, behind the Australian National University (20) and the University of Melbourne (41). Since 2014, UNSW has moved up seven places in the rankings. It scored a maximum 100/100 on the QS International Faculty Index, based on its proportion of international faculty members. Typically, universities located in places with large expatriate populations, like UAE, Hong Kong and Switzerland, score highly on this measure, so UNSW’s perfect score highlights its attractiveness to overseas staff. QS also gave UNSW high marks for its proportion of international students (97.8/100) and academic reputation (96.4/100).

Two of Australia’s freshest new voices in science communication have been unearthed at UNSW, and are already brightening up the conversations in their areas of health research. Ursula Sansom-Daly and Denton Callander were selected from more than 100 talented entrants as winners of UNSW – ABC Radio National’s Top 5 Under 40 initiative. The quest aims to discover early-career researchers with a flair for communication, and to develop those instincts with a two-week media residency at the ABC, held in July.

Sansom-Daly, a psycho-oncologist with the School of Women and Children’s Health, is using her new skills to diversify the view of how young people experience cancer and cancer survivorship.
“For young people who survive cancer it’s a paradox. They want their friends and loved ones to recognise the enormity of what they’ve been through but they often don’t want to be treated any different. That’s a fine line for family and loved ones to tread.”
Callander, a researcher at The Kirby Institute, hopes to see his area of sexual health and sexuality discussed in the media in a way that’s more honest and fun.
Look out for Ursula Sansom-Daly and Denton Callander in the ABC’s coverage of Science Week, 12-20 August. 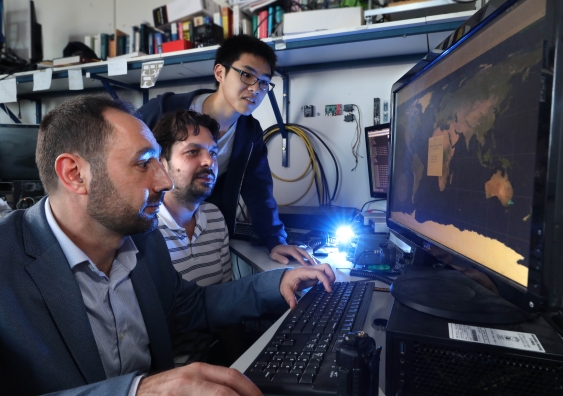 Two Australian satellites, feared lost after being deployed from the International Space Station (ISS), have been recovered by a team led by UNSW engineers after weeks of a fraught – and at times heart-stopping – recovery operation.

“It was like something out of Apollo 13,” said Elias Aboutanios (pictured above left), project leader for UNSW-EC0, the first Australian-built satellite in 15 years to go into space.
“Our satellite was orbiting at 27,000kmh almost 400km above our heads. We couldn’t see it, couldn’t inspect it, and had almost no data to work with.”

Three Australian research satellites – two built at UNSW – blasted off on 19 April from Cape Canaveral as part of the international QB50 mission, a swarm of 36 small satellites (known as ‘cubesats’) designed to explore the little-understood region above Earth known as the thermosphere.

Within 30 minutes of deployment from the ISS, both UNSW-EC0 and INSPIRE-2 were meant to transmit a beacon. But no signal was detected from either by the ground teams at UNSW’s Australian Centre for Space Engineering Research (ACSER) or the Australian National University when the cubesats flew over Sydney, which they do twice a day.

Through a complex series of collaborations, including colleagues at the ANU and the University of Sydney, a Dutch sound technician and the International Space University in France, the team eventually solved the puzzle late in June.

“For more than three weeks, we were looking in the wrong part of the sky for our satellite – we couldn’t have known that,” said Aboutanios. “But the procedures we put in place, the scenarios we ran and the solutions we developed, they all paid off.”
– Wilson da Silva

• UNSW has won more than $20 million in the latest round of grants from the Australian Research Council (ARC), including two prestigious Australian Laureate Fellowships, 13 Future Fellowships and funding under the ARC’s Industrial Transformation Research Program. Professor Jill Bennett and Professor Fedor Sukochev were among the 17 Laureate Fellows. Bennett’s project involves research on immersive visualisation that allows users to see through the eyes of others. Sukochev’s work is in mathematical methods with physical world applications.

• Disability researchers at UNSW are putting the finishing touches on a groundbreaking initiative to help transform the lives of people with disability by harnessing research and innovation across all faculties and disciplines. The Disability Innovation Institute, to be launched this year, will be a platform to combine disability studies with research in STEM (Science, Technology, Engineering and Medicine) and HASS (Humanities and Social Sciences).

• A new alliance of three of Australia’s leading universities will focus on finding solutions to the challenges facing communities in NSW. The NUW Alliance will see the University of Newcastle, UNSW Sydney and the University of Wollongong exploring and delivering ways to add value in health, education, technology and business development. The alliance will be the first grouping of its kind in Australia. 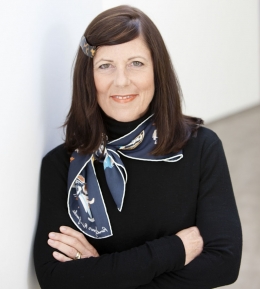 • Dr Elizabeth Eastland (left) has been appointed to the position of Director Entrepreneurship. Over the last seven years, Dr Eastland has founded and led the University of Wollongong’s globally recognised innovation accelerator, iAccelerate. She has also been responsible for CSIRO’s innovation strategy and delivering Australia’s first national deep-tech accelerator.

• A groundbreaking UNSW study of quad bike safety on farms and other workplaces has found that one in two riders has crashed and about two-thirds of the crashes involved rollovers. Riders aged 70 years or older had double the risk of injury compared with young adult riders, and mustering livestock on farms was identified as a particularly high-risk activity.

• A 30-year-long UNSW study of wetlands in eastern Australia has found that construction of dams and diversion of water from the Murray–Darling Basin have led to a more than 70% decline in waterbird numbers. The finding of severe degradation due to reduced water flow has significant implications for managing the development of other rivers in Australia and around the world. The study is published in the journal Global Change Biology. 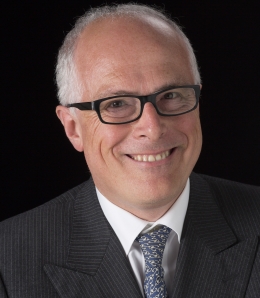 • Former headmaster of Sydney Grammar School Dr John Vallance (right) will join UNSW as Honorary Professor for the Public Understanding of the Humanities. Dr Vallance will contribute to the celebration of the importance of the humanities as part of a rounded scientific, professional and technical education. He will also encourage collaboration between the tertiary and secondary education sectors to drive educational outcomes.

• Universities must play their part in tackling the plight of refugees, “the greatest moral issue of our time”, UNSW President and Vice-Chancellor Professor Ian Jacobs told a World Refugee Day event. Professor Jacobs told the audience that the world had become preoccupied with keeping people out and creating barriers. Fortunately, there were leaders such as German Chancellor Angela Merkel who felt the moral obligation to act, he said. “We must follow that example and find solutions, and universities … must play their part.”

• UNSW chemists have invented a new, cheap catalyst for splitting water with an electrical current to produce clean hydrogen fuel. The technology is based on the creation of ultrathin slices of porous metal – organic complex materials coated onto a foam electrode, which the researchers have unexpectedly shown is highly conductive of electricity and active for splitting water. The research by Associate Professor Chuan Zhao, Dr Sheng Chen and Dr Jingjing Duan, is published in Nature Communications. 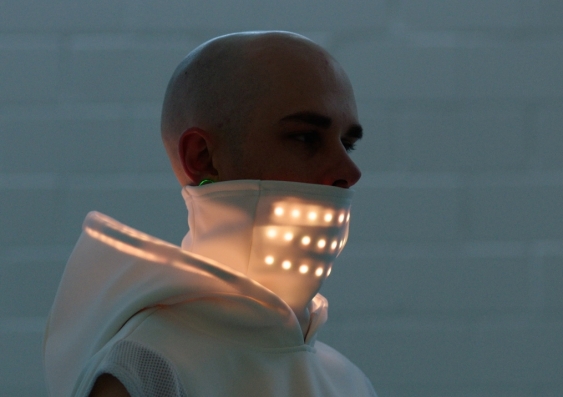 E-motion, a clothing range that allows men to communicate non-verbally.

Men’s clothing that lights up according to the wearer’s mood, a device that calms autistic toddlers and a virtual exercise coach, all created by UNSW graduates, have dominated the 2017 Young Designer of the Year Awards.

Lilian Hambling, a UNSW Art & Design graduate, won the coveted Young Designer of the Year Award for E-motion, a clothing range that allows men to communicate non-verbally. Sensors in the garments respond to the wearer’s pulse, muscle tension and proximity, converting the physical information into coloured light animations that emulate different emotions like a pounding heart, rush of adrenaline and the feeling of ‘butterflies’.

Hambling explains that by enabling “men to be more openly expressive, the stereotypical expectations of masculinity can change; instead of hiding them away, feelings – such as love, anger, fear and sadness – can be displayed as interactive gestures”.

Industrial Design graduate Era Camilet won the Design Innovation Award for HUG, a self-regulation and early warning system that lets parents of autistic children know when their child is about to have an aggressive outburst.