Billionaire Microsoft co-founder and philanthropist Bill Gates said polio could be eradicated in the next five years, during a special ABC TV Q&A program on global health hosted by UNSW. 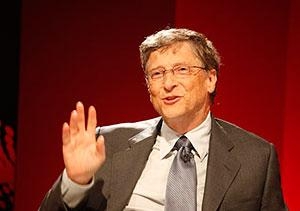 Billionaire Microsoft co-founder and philanthropist Bill Gates said polio could be eradicated in the next five years, during a special ABC TV Q&A program on global health and development hosted by UNSW.

With fewer than 300 polio cases left in three countries in the world, the co-chair of the Bill & Melinda Gates Foundation predicted the disease could be stamped out by 2018 with an investment of $5.5 billion. The Australian government today announced it will give a further $80 million over four years to "help finish the job".

The audience in the Clancy Auditorium was packed to capacity with politicians, business leaders, students and members of the University community. There was an overwhelming demand to hear Mr Gates speak, with close to 3,500 students and alumni entering a UNSW competition for tickets.

Vice-Chancellor Professor Fred Hilmer welcomed Mr Gates to the University, acknowledging his Foundation’s US$12.5 million grant for international research being conducted by UNSW’s Kirby Institute for infection and immunity in society. The ENCORE project has the potential to extend antiretroviral therapy to millions of HIV-affected people worldwide.

The Premier of NSW, Barry O’Farrell, welcomed Mr Gates to the state.

Audience members quizzed Mr Gates on a broad range of topics from philanthropy, tax and aid to technology and being an introvert in business.

UNSW Commerce Law student Allina Yang asked Mr Gates about his personal motivations and philosophies. She had conducted an email interview with the philanthropist prior to the event. Her opinion piece -- Gates inspires a new generation -- has been published in the Sydney Morning Herald.

The event capped off a packed one-day schedule for Mr Gates who earlier lobbied the Prime Minister and Opposition Leader to support an increase in Australia's foreign aid commitment to 0.5 percent of GDP. 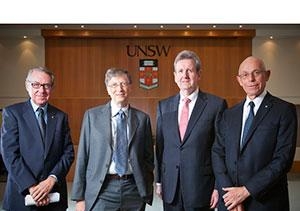