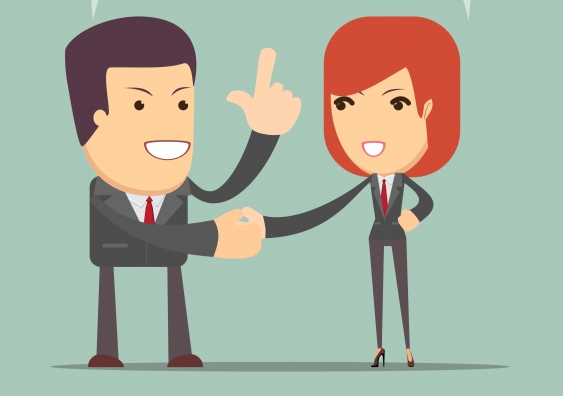 I am a professor and a newly minted pro vice-chancellor and I have spent my entire research and working life with male bosses or supervisors. I have never reported to a woman.

This phenomenon is particularly acute in the fields of science, technology, engineering, mathematics and medicine (STEMM).

There are many wonderful things that are positively correlated with increased gender equality. Men’s psychological and physical health improves and the gender gap in life expectancy decreases. There is less domestic violence.

What we all need to do is leave our comfortable universe and step into a female rocket scientist’s shoes.

Companies with more women on their boards have higher financial returns and greater levels of innovation.  Countries with greater gender parity have  a higher annual GDP.

A study of 50 US states and 31 European countries found, on average, men are also happier, they have a better quality of life, spend more time with their friends and family, and are less constrained by strict gender norms. Gender equality lifts us all.

So for the good of everyone, men and women must mainstream gender equity. This means building gender equality into every practice and process so that it becomes the new norm.

We all have a lifetime’s worth of experiences, but depending on our background, those experiences may be quite different. This can become a problem if one dominant group holds most of the powerful positions.

Men comprise seven out of eight of Australia’s current Go8 university vice-chancellors, 79% of our STEMM professors, 83% of Australia’s CEOs and about 88% of our learned Australian Academy of Science fellows.

These powerful people – directors, professors, academy fellows – are making decisions and defining merit; they can design out gender bias if they have the motivation to do so. Attaining that desire for change, in the face of resistance, may require some recalibration of their world view. This will be more difficult for people in positions of privilege for whom discrimination is less visible.

We can also surround ourselves with female mentors and colleagues so that we gain ‘outsider’ perspectives. Women will have diverse experiences and attitudes towards the gendered workplace. If we surround ourselves with women and we avoid the four Ds, set out below, we can help recalibrate our world view and break down stereotypes.

Denial is the outright dismissal of the existence of inequity. Denial might be more common if you have never experienced that particular bias. For example, one study revealed that male STEMM faculty members were less likely to accept evidence of gender bias.

To make gender equity mainstream, we need to avoid denial by first listening and accepting, in order to enable discussion. If we are listening to a first-hand account of bias then we must assist the person to find appropriate professional support.

If we remain in doubt about the likelihood of bias, we can always look for empirical evidence of general patterns. We might even consider doing an analysis or experiment to test for discrimination ourselves.

This is when we diminish the problem by saying something like: “You’re making too big a deal out of it.”

This is a difficult one. We develop a thick skin. So it is tempting to dismiss the worries of our juniors in whatever form the hierarchy takes.

But people who experience inequity don’t always develop thick skins. They can experience real-time reactions and under-confidence resulting from a lifetime of exposure to biased evaluations and stereotypes.

Mainstreaming gender equity into the culture of an organisation requires accepting the gravity of the situation as presented, and looking for solutions to problems even if we do not suffer them.

D for do not defend

If we find ourselves using the phrase “I’m sure they didn’t mean it that way” then we need to stop, reflect and reconsider our perspective.

Again, it may take a conscious effort to accept that the inequity is real. A great example of this is the uncritical use of the term “merit”. People believe they are making judgements based entirely on “excellence”. But several studies show that men and women will judge CVs, papers, teaching and even student essays to be superior when labelled with a male name.

D for do not derail the discussion

Derailment happens when we are being empathetic or trying to get attention ourselves. We may listen to an example of bias and respond with the phrase: “Oh yes, but you won’t believe what happened to me …” This can, inadvertently, change the topic.

If our own experience is less intense, and the consequences less severe, then our contribution may derail and diminish the discussion. We need to have these discussions about the serious issues of harassment and bias.

If men and women are to mainstream gender equity, our hearts must be in the right place and we must value fairness, but this will not guarantee success. We know we must work proactively to put systems and practices in place that reduce bias and promote equality and diversity. For the most part we already know what those systems and practices are. They are hardly rocket science.

They say that travel broadens the mind, so maybe what we all need to do is leave our comfortable universe and step into a female rocket scientist’s shoes.