Gender equity on the menu at UNSW lunch

UNSW colleagues from across faculties and schools met and shared insights with federal Sex Discrimination Commissioner Kate Jenkins during her campus visit. 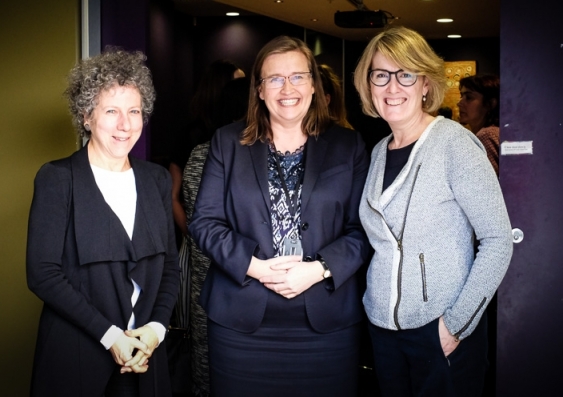 Ms Jenkins has been conducting similar informal meetings around the country since she began her five-year term earlier this year. “The main priority for the next six months is to talk far and wide to groups like this, to advance the conversation rather than starting from square one,” she said.

“The work we’re doing is not just about laws and policies, it’s about what needs to be done to bring about real change,” she said. “I’m very interested in how research can advance better policy and better outcomes.”

“When I made the transition to the public sector four years ago, I realised there’s a lot of good information and research available that isn’t being used. Having an evidence base makes all the difference.”

With a career in law behind her, Ms Jenkins had come to her new role believing the law was an important tool for change. “But what we need now isn’t more laws but systemic and attitudinal change … how do we change the system? How do you combat inequality?” 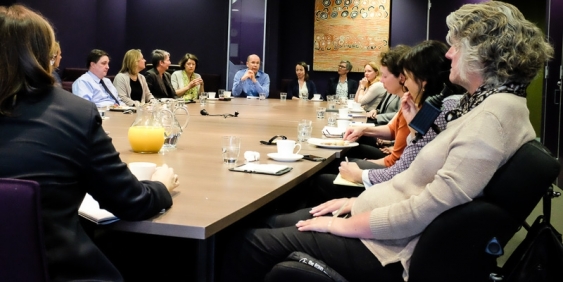 The gathering was a precursor to the launch on Tuesday of a national survey that’s part of Universities Australia’s Respect.Now.Always initiative, a ground-breaking national campaign by the peak body to ensure that students and staff are safe from sexual assault and sexual harassment.

The survey – based on research by the AHRCentre and with input from Australian Bureau of Statistics experts – will ask students about their experience of sexual assault and harassment and the effectiveness of reporting procedures. The aim is to obtain information about the nature and scale of the problem to inform further action and development of best practice university policies and procedures.

“We are seeking reliable data on not just the prevalence but the experience of sexual harassment and assaults on campus,” Ms Jenkins said. “But this survey will only be great if students take part. We need all this effort to produce good evidence.”

The hour-long discussion ranged across numerous topics, including female academics finding it difficult to advance beyond a certain level; having too few women in decision-making roles; the challenges faced by women from diverse backgrounds; the possible role of Universities Australia in starting a discussion about targets and quotas and about diversity; how the pressure for excellence can impact on diversity; and the importance of universities as a place for shifting attitudes and creating long-term change.

Ms Jenkins acknowledged the campaign for gender equality was experiencing something of a backlash. “If you talk about gender equality, the backlash seems to be more fierce than it was 20 years ago,” she said. “Some of it is based on the fear of white, middle-aged men, some is based on an idea that women already have equality. That’s where the research is so vital.”

Professor Louise Chappell noted that while the leadership level supported change, pushback and anger tended to come from further down the chain. “Part of the problem is the way these things are framed – it’s a woman problem and that’s the problem that has to be fixed. We need to get into the structure of the place to see what needs to change, trying to change the way we view the problem,” Professor Chappell said.

In terms of high performance, Ms Jenkins said the business case for equality was impossible to ignore. “I think universities know that if you want to be high performing, you can’t put the same kind of people around the table all the time,” she said.