Brody Smith and Martin, a member of the Zukuka Bora farmers' collective in Uganda.

Some of the world’s best coffee grows along the fertile slopes and valleys of Mt Elgon, an extinct volcano in eastern Uganda, students Brody Smith and Darcy Small learned when they visited the country last year.

Sydney’s coffee connoisseurs have since confirmed it. “It just has a really nice, unique taste,” says Smith, a sixth-year Biomedical and Mechatronics Engineering student.

The pair travelled to Uganda to work with local agriculture students as part of an exchange between UNSW Engineering and Uganda’s Gulu University.

They were particularly struck by the disconnect between coffee-obsessed Australians back home and the people growing coffee beans in Uganda.

“It was just the absurdity of how little these farmers are paid for their produce and how much we pay for a cup of coffee in Australia,” says Small, a fifth-year Photovoltaics and Solar Energy Engineering student.

The two learned of the Bugisu coffee-growing region surrounding Mt Elgon through their conversations with Daniel Okinong, a Gulu University student who grew up nearby.

“Daniel blew us away, not only with his knowledge of local agricultural practices but also world economies and business,” Smith says. “He told us about the experiences of the coffee farmers and the multiple challenges they face.

“They’re creating this high-quality product. But for a lot of geographical, historical and political reasons, they have not been able to get their product out there.”

Their conversations with Okinong were the catalyst for Bugisu Project, a student start-up that aims to supply ethicallysourced coffee from Ugandan farmers to Australian businesses.

“Australia has an $8 billion coffee market and people are becoming more ethically aware and interested in transparency with the supply chain,” Smith says. “With Daniel’s early help, we realised we could generate ongoing impact in Uganda through an ethical business that satisfies Australia’s love of coffee.”

This month, Bugisu Project commenced their soft-launch with five Australian workplaces on board. They’re planning for a large-scale launch in early 2019. As a not-for-profit, the enterprise plans to channel funds into charities and NGOs in Uganda. 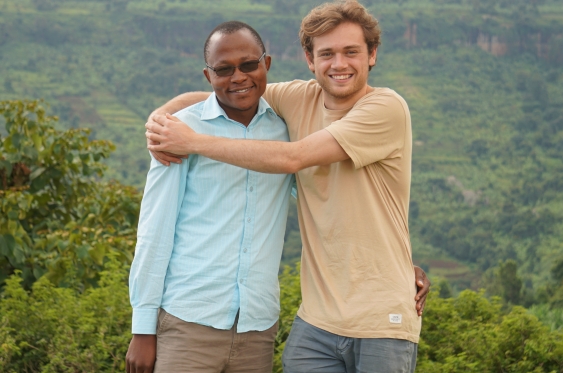 In Australia, Bugisu Project will also be a zero-waste coffee supplier by packaging coffee in reusable jars and composting coffee grounds they collect from the partner businesses.

Small says Bugisu Project has been a labour of love, but one they couldn’t have pursued without the help of their UNSW contacts.

“We are by no means experts in ethical procurement, or setting up an import/export business,” says Small. “But that’s been the exciting thing. We’re talking to as many people as we can and learning as we go.

“It’s a complex space that even experts make errors in, so we want to do our research properly.”

When Smith and Small returned to Australia, they consulted with the UNSW Engineering Student Opportunities team, recruited a few more students and started firming up their business model. They joined a UNSW pre-accelerator program and undertook a one-week coffee trial with several Sydney workplaces, which were able to give their stamp of approval to the Bugisu beans.

“That’s when we realised that, yes, it really is high-quality stuff,” Small says.

In July, Smith and Small travelled back to Uganda to visit farmers, potential development partners and experts in the international coffee trade. They spent the first week in Mbale, the town beneath Mt Elgon, visiting farmers and researching how the coffee is produced – with Okinong as their guide and cultural advisor.

“It was really cool to be running this trip ourselves, and Daniel was excellent at interacting with local people and helping us learn as much as we could.”

The team also met with Zukuka Bora, a farmers’ collective that educates farmers and makes sure they’re being fairly paid for their produce.

“We visited several of the large coffee companies in the town, to cross-check what we’d learnt about Zukuka Bora and we spent a few days on the mountain visiting the farmers themselves to verify everything we’d heard first hand,” Small says.

They spent the second half of the trip in the Ugandan capital, Kampala.

“We met as many different experts in the development space, the cultural space and the environmental space as we could to make sure that what we are planning to do is aligned with what the experts in Uganda think is important,” Small says.

Back at UNSW, students Brianna Kerr and Monica Wang joined the project as Director of Impact and Director of Finance. Kerr, in her final year of Development Studies, says the team signed their first official funding partnership with the Love Mercy Foundation, a Uganda-focused organisation run by UNSW alum Caitlin Barrett.

Love Mercy runs Cents for Seeds, a program that provides loans in the form of seeds for Ugandan women to plant crops.

“When the boys went to Uganda, gender equality was something they identified as an issue, particularly in terms of unrewarded and informal labour,” says Kerr. “Women in Uganda can use the seeds they receive from Love Mercy to grow enough produce to feed their families, repay their loan and use the excess to send their children to school or invest in a small business.

“We’re giving people coffee that is more than just coffee. When they drink Bugisu, they are doing more than waking themselves up. There are profits that are being generated that are doing good. So it’s a no-brainer for companies to jump on board,” she says.

By January of 2019, Bugisu Project hopes to have partnered with 15 companies, all paying to provide Ugandan coffee to their employees.

They are also working on a system that will allow them to collect coffee grounds and use them as ingredients in skin care products, which can then be delivered back to the businesses for their use.

If your workplace would like to generate lasting impact by drinking specialty coffee with a smaller footprint, get in touch with the team for a trial. Go to www.bugisuproject.co or email team@bugisuproject.co for more information.