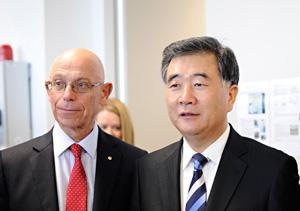 Leading the delegation was Mr Wang Yang, Secretary for the Communist Party of China’s (CPC) Guangdong Committee and Member of the Political Bureau for the CPC Central Committee.

The visit was aimed at strengthening ties between UNSW and universities in China’s highly populous and economically robust southern province, and included a tour of the $75-million Tyree Building – the new headquarters for energy-related research at UNSW.

In welcoming the delegation, Vice-Chancellor Professor Fred Hilmer highlighted existing research collaborations between UNSW and China, and said the university would look for opportunities to advance these partnerships.

He also praised the contribution of Chinese students – who comprise 44 per cent of all international students enrolled at UNSW – to the wider university community.

Climate science has already proven its worth