Two of Australia’s top former military leaders Angus Houston and David Hurley have been awarded UNSW’s highest honour in recognition of their eminent service to the community. 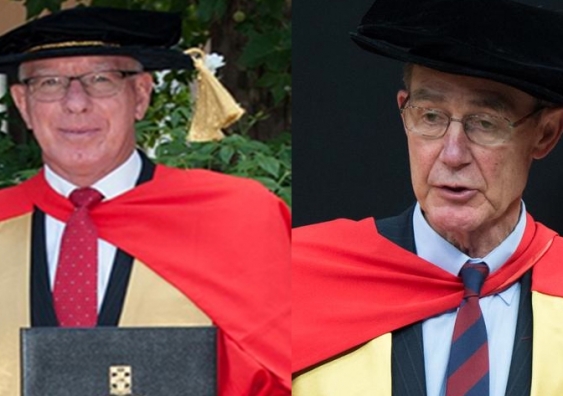 Two of Australia’s top former military leaders Angus Houston and David Hurley have been awarded UNSW’s highest honour in recognition of their eminent service to the community.

The former Chiefs of the Australian Defence Force (ADF) have been conferred Doctor of the University, honoris causa in separate graduation ceremonies at UNSW Canberra.

His Excellency General The Honourable David Hurley AC DSC was Chief of the Defence Force from July 2011 until his retirement from the Army in June 2014. He is currently serving as Governor of New South Wales.

He graduated from the Royal Military College, Duntroon in December 1975 into the Royal Australian Infantry Corps. He later joined the 5th/7th Battalion and in 1989 served in Malaysia as the Mechanised Infantry Adviser of the Australian Army Project Team.

He was awarded the Distinguished Service Cross for his service in Somalia during Operation SOLACE, where he commanded the Australian battalion in 1993.

In 2008, he was appointed to the position of Vice Chief of the Defence Force and in 2010, he was made a Companion of the Order of Australia.

Mr Gonski noted General Hurley’s commitment to assisting soldiers suffering post-traumatic stress disorder. An historic theatre collaboration between the ADF and the Sydney Theatre Company, initiated by General Hurley, resulted in the staging of the play The Long Way Home by Daniel Keene in 2014.

“It was both a powerful beginning and a milestone in the community’s understanding of the experiences of returned soldiers,” Mr Gonski said. The live production went on to tour nationally.

Conferring his honorary degree, Mr Gonski said Sir Angus “had always sought to lead by example, empower, and work tirelessly for the welfare of those in his charge”.

His legacy includes improved control and command systems, a better understanding of servicemen and women suffering mental health issues, and the rehabilitation of ADF casualties.

“As Acting Chief of the Defence Force in 2002, Sir Angus’ personal courage in what became known as the Children Overboard incident became, and remains, an inspiring example of integrity and leadership to all officers in the Australian Defence Force,” Mr Gonski said.

In 2008, Sir Angus was made a Companion of the Order of Australia.

His commitment to serving the community continued after his retirement from the ADF in 2011.

Sir Angus served as Chair of the Anzac Centenary Advisory Board where he provided strategic advice to the federal government on Australia’s commemorations for the 100th Anniversary of WWI.

He also chaired the expert panel to examine Australian policy on asylum seekers in 2012.

In 2014, he led Australia’s response to two air disasters involving Malaysia Airlines.  In his work as the Prime Minister’s Special Envoy to Ukraine, Sir Angus led Australia’s efforts in Ukraine to help recover, identify and repatriate the remains of Australians killed in the MH17 tragedy.

Sir Angus was awarded a Knighthood on Australia Day this year for his extraordinary and pre-eminent achievement and merit in service to Australia.